But I still had fun!

It’s easy to be cynical about a new Call of Duty release. Between the series’ annualization and aggressive marketing, the urge to fire with phasers set to snark is strong. But every year I end up thoroughly enjoying an afternoon spent playing through the campaign (except for Ghosts, bleh).

While the core of multiplayer always stays the same, it’s become a yearly ritual for my brother and me to at least spend a couple of days playing split screen multiplayer. We usually get our fill and drop it quick, but we have some rapid bro fun.

I’m horrible at Call of Duty though. My playing each one a little bit hasn’t fixed that. That’d be like dipping my toe in eight puddles and saying I was an Olympic swimmer. Anyway, I played Black Ops III last night!

Yesterday’s hands-on event started off with a crazy-long presentation about how Treyarch is revamping the movement to give it an omni-directional feel. Past Call of Duty games often felt like a constant sprint into the fray, only to be murderlized in seconds. You can now sprint indefinitely, run on walls, use thrust jumps, and powerslides to move anywhere you want, whenever you want to. Well, as long as you have the boost juice.

Y’see, thrust jumping can either be used all in one burst like a jetpack or shot out like micro-toots to keep you aloft over a great distance. The powerslide uses half of your boost bar but regenerates rather quickly. You can vault over ledges forwards, backwards, sideways. You can swim. This all adds up to make everything feel really fucking fast. 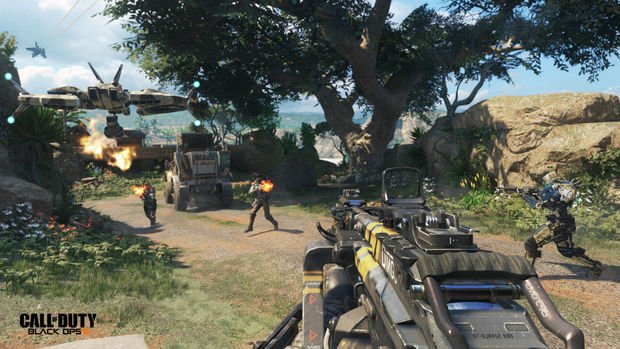 After that part of the presentation (which really did feel like the world’s longest tutorial, complete with button prompts), Treyarch showed off two new specialists: Prophet and Nomad. Prophet’s special weapon is the Tempest, a charged weapon that shoots chain lightning. His special ability is called Glitch and allows him to warp back to a previous position. Nomad uses the H.I.V.E. which launches little pod traps that unleash cyber bees when someone gets to close. When he gets close to death, his Rejack ability lets him inject something something nanomachines to heal.

Finally, we sat down to play. I started putting together my character, choosing Outrider since she was a cool lady with a bow. I’m not sure if there were technical problems or if the other journalists were all taking massive shits first before hunkering down to play, but it took a good 20 minutes before the match started. During the wait, I renamed my classes. 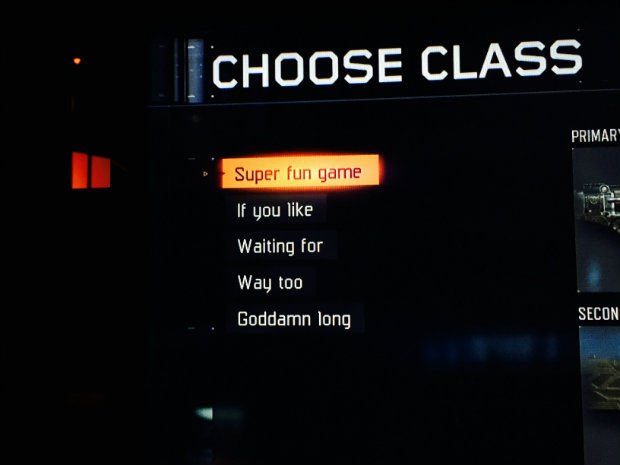 When the match started, I acclimated to the new movement within seconds, powersliding under obstacles, running on walls, leaping over enemies to surprise them and shoot them before they even I was there. I was on fire, quickly gaining access to my Sparrow with explosive-tipped arrows, making fools explode left and right. I laughed at my newfound abilities, Treyarch patted me on the back, they gave me a free pizza, and my dad called to tell me he loved me.

Except none of that happened.

I did get used to the controls right away, but always managed to powerslide right into someone’s bullets. I was shot out of the sky time and again every time I tried to fart-jump across a chasm. When I eventually earned my Sparrow bow, I nocked an arrow in anticipatory excitement only to get immediately shot in the back. Grr.

The sick part is that I was enjoying my defeat. I kept trying new weapons and perks to up my chances of survival to no avail, yet I was never mad at the game. Whoever the dude was that was sitting in front of me was a camping dick, though. I think I might be engaging in my yearly ritual again with Black Ops III.