We’ve been watching the progress on Shoot Many Robots pretty closely since its reveal last year at GDC and it’s come a long way in that time. P. Walter Tugnuts’ quest to save the world from killer machines struck a chord with me early on with a down-and-dirty approach to the side-scrolling shooter and an emphasis on character customization.

As it continues to edge its way to release, Demiurge offered me an opportunity to check in on that progress with a preview build of the game featuring the first three stages. I can confirm that there is still a seemingly endless supply of robots to shoot and to do so is to know joy. 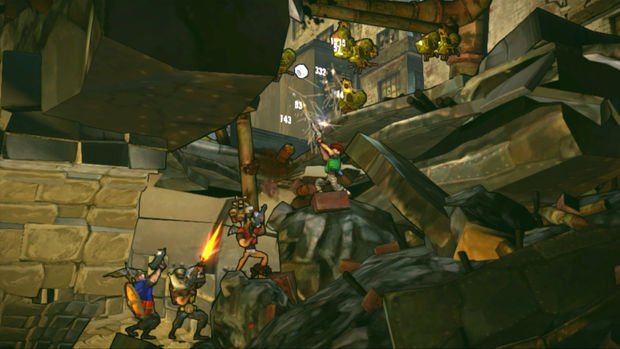 Shoot Many Robots feels built to be a cooperative experience even at the beginning. The challenge level feels just high enough in these initial stages that while playing solo you’re likely to wish you had an extra pair of hands to help you out. Since the difficulty scales up with more and tougher robots as you add more players, that comfort level (or lack thereof) persists even when they come along for the ride.

Demiurge wisely allows players to join a friend’s match regardless of whether their own progression has reached the selected stage but it’s a double-edged sword. In an effort to familiarize myself a bit and not feel totally humiliated in my playthrough with the developers, I had deceitfully snuck in a few runs of the first stage ahead of our scheduled time to play together. As a result, when the time came for us to begin, I had them at a bit of a disadvantage in terms of abilities which translated into my soundly beating them out for high scores at the end of each stage we played. Meanwhile they put me at considerable risk by adding more enemies to the mix and not being able to kill as effectively, so I had to adjust my strategy to make sure I could keep them alive if necessary.

This problem (if you can even call it that in a game where the competitive aspect is such a secondary element and a skilled player appears capable of carrying another through a stage) is both caused and solved by the character customization system. As you destroy robots, they leave behind nuts which are then exchanged back at Walter’s RV for new weapons and equipment. Killing consistently to maintain a combo streak earns multipliers for these nuts, so racking them up starts to happen in fairly swift order and anybody who’s lagging behind in terms of experience should be able to outfit themselves with more advanced gear without much pain and suffering. Nonetheless, this could turn off some players early on, particularly if they hop on the bandwagon a fair bit later than their friends who’ll make short work of enemies while the newcomer struggles to kill anything.

But once that customization starts to open up, it goes swiftly into a full bloom. Walter can be equipped with primary and secondary weapons, headwear, backpack and pants. These items confer all manner of bonuses from increased health and damage to granting abilities such as sliding or hangtime which lets you drift in the air and avoid all those filthy robots on the ground. 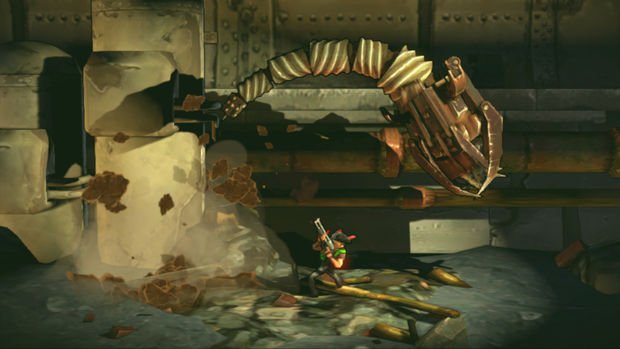 There are a ton of these unlocks available and they become very pricey the higher you go, so the completionist is likely to have a lengthy road ahead of them. The range of benefits they offer provides considerable options for the player who wants to specialize or even just goof around attempting less beneficial combinations based solely on their visual appearance.

Stage design also lends itself well to this equipment system, particularly in the way Demiurge creates replay value. Some stages consist of traveling from one end to the other, while others require you to kill waves of enemies in a survival situation. This latter type offers victory in two forms, as bonus waves extend the length of the stage beyond the point necessary to unlock the next level. These bonus rounds are significantly more difficult and it’s expected that you’ll probably have to come back to the stage to successfully finish them once you’ve improved your gear and gained more experience. But they’re also a fantastic way to accrue nuts quickly, as the steady stream of enemies in a confined space makes it easy to keep kill combos going.

So, to sum up, we have an endless supply of robots which need shooting, hundreds of weapon and equipment unlocks which facilitate said shooting of robots and an accessible multiplayer formula whereby your friends can help you shoot even more robots. Now, if only Demiurge would just tell me when I get to do all this stuff, I’d be a happy camper. All we know is that it’s coming “soon” and “soon” can’t come soon enough.