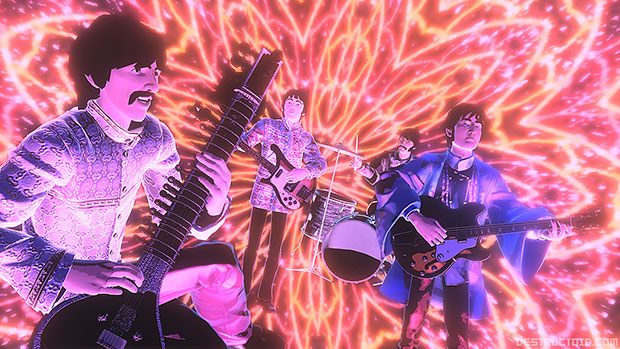 In case you weren’t aware, this is, unequivocally, the greatest week in the nearly two-year history of Rock Band downloadable content. Yes, I said it, and here’s why. Available today for purchase on Xbox Live and the Wii Shop Channel (Thursday on the PlayStation Store) is the “Complete The Album Pack” for Abbey Road in The Beatles: Rock Band, which costs $16.99, along with a ten-pack of Queen songs for $15.99. That’s over twenty songs from two of the best bands of all time.

Yesterday, I played and sang some of those songs at MTV’s offices in Times Square, New York. Abbey Road may be my favorite Beatles album, so I was thrilled to play parts of the famous 16-minute side two medley. (You can’t buy every song individually — they all run into one another, so Harmonix split them up as best they could. For example, “Sun King” and “Mean Mr. Mustard” come together for $1.99.) Just as a note, Harmonix’s Alex Navarro told me that all the Beatles DLC songs will include their own unique dreamscapes; they will, however, utilize art assets that are already on the game disc.

I played guitar on “Golden Slumbers” / “Carry That Weight” / “The End,” and the first thing I noticed was that Harmonix charted a variety of instruments on the guitar part just to keep things interesting. This includes, for instance, the horns on “Carry That Weight” (which are a reprise of the melody from “You Never Give Me Your Money”) and the strings on “Golden Slumbers.” I don’t think it’s right to fault Harmonix for this, though; charting non-guitar instruments in the name of fun gameplay seems like a fair compromise to me. And they didn’t make up instrument parts where there weren’t any — “Because,” for example, has no drums.

When we switched over to Rock Band 2 to play the Queen songs, I decided to be brave and tackle both Freddie Mercury and David Bowie on “Under Pressure.” That one went okay, but I was most proud of my 97% score on “Somebody To Love,” whose vocal part is devil horns-hard. I’m just glad there were no windows in the demo room for me to shatter.

Anyway, you’ll have a good time if you buy any of this week’s DLC. I personally guarantee it — unless you don’t like great music. In that case, you should probably pick up the tracks just to educate yourself.