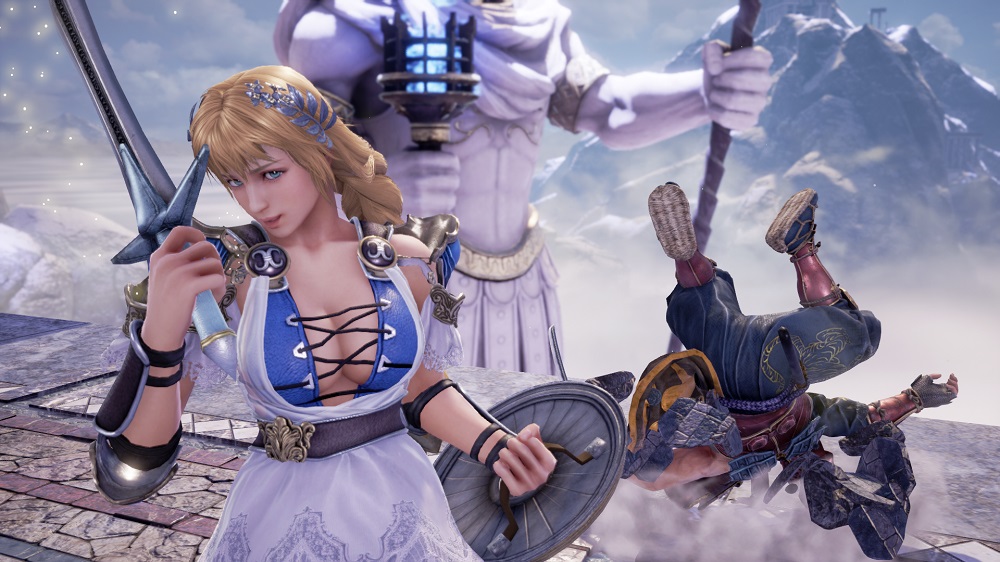 This weekend, I had the good fortune to be in attendance at Namco Bandai’s LEVEL UP Winter event, transporting me from cold, soggy Nottingham to cold, soggy Paris. Held at Le Huit Valois convention centre, writers, journalists, professionals and myself gathered from all over Europe to see Namco Bandai present builds of their 2018 wares.

The main draw of the event was a playable build of Soulcalibur VI, which was recently announced at The Game Awards to the excitement of series’ fans everywhere. During last week’s PlayStation Experience, various developer interviews revealed further information about the one-on-one fighter’s direction, including the decision to strip gameplay down to its roots, as well as a strong desire to welcome a new generation of fans into the fold. 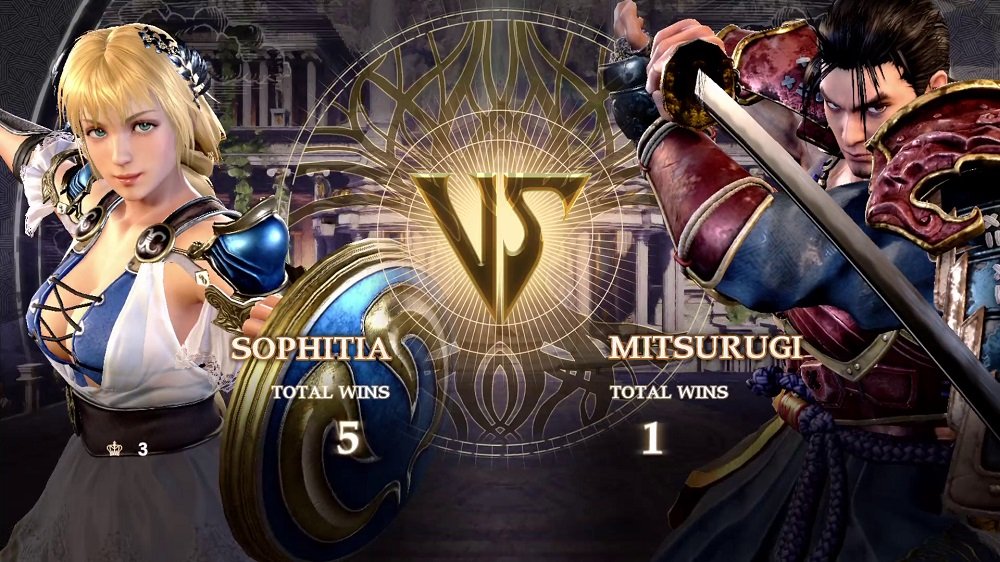 The demo build of the game features two playable characters; steely-eyed Yojimbo-lite Mitsurugi and the benevolent-yet-valiant warrior Sophitia, both of whom have been poster-kids for the franchise since its 1995 debut. The two characters could be chosen from a screen that had twenty portrait placeholders, and though there was some definite “dead-eyes” syndrome going on with the faces, Mitsurugi and Sophitia’s models look slick, if slightly low-res in texture — possibly to keep the framerate sharp on a series that prides itself on intricate detailing.

Two stages were playable. “The Shrine of Eurydice” has the warriors battling under statues and architecture of Greek gods past, while “Snow-Capped Showdown” sees them fight on an icy shore next to a lake. Neat little features bring the arenas to life, such as the shrine’s mosaic flooring crumbling underfoot and the colours transitioning under a warm, orange sunset as the fight continued. 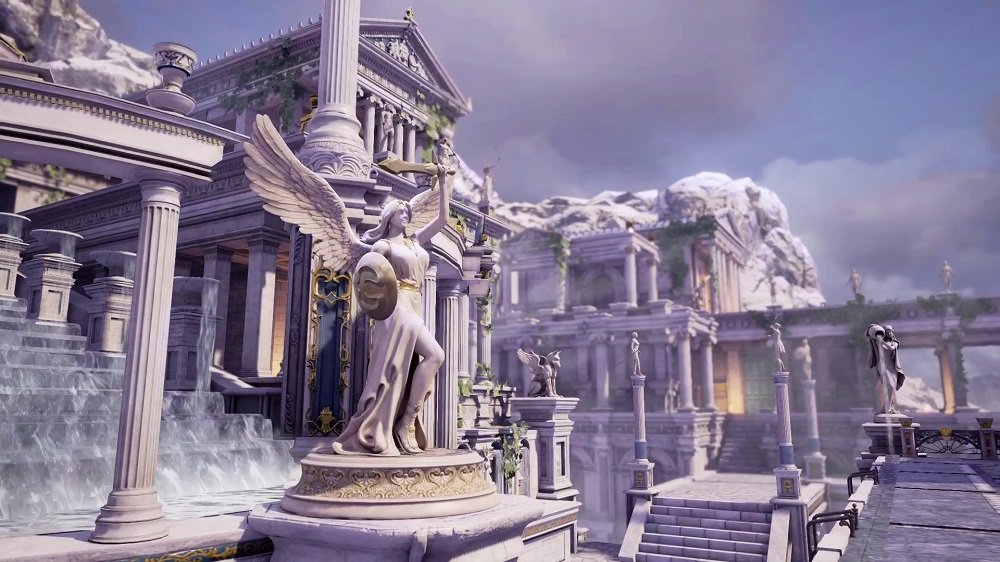 Although I play fighting games more than any other genre, it has been some time since I last picked up Soulcalibur. Despite this, the demo achieved its “Back to the Dreamcast” feel in spades, Jack. Square, Triangle and Circle are Horizontal Slash, Vertical Slash and Kick respectively, with Cross serving as Block. Forward and Cross busts out Guard Impact, a sweet parry, allowing for a well-timed reversal opportunity when on the receiving end of a beatdown.

As with classic Caliburs past, basic strings come from repetitive or alternating slash buttons, with motions or double-taps of the D-pad added to unleash more powerful attacks. These strikes often lead to damaging combos, juggles, or high-low mixups to throw off your opponent’s defensive game. The Soul Charge mechanic returns — burning meter to boost your fighter’s specials — and Lethal Hits, landed cleanly, will cause blowback and can even destroy an opponent’s armour, revealing Sophitia’s delightful ankles, or Mitsurugi’s ferocious nipples.

Altogether, the combat in Soulcalibur VI has a satisfying visual/aural aesthetic, with strikes chaining together smoothly and gracefully, making extended combos and refined defensive play look like a dance. A DEATH DANCE. 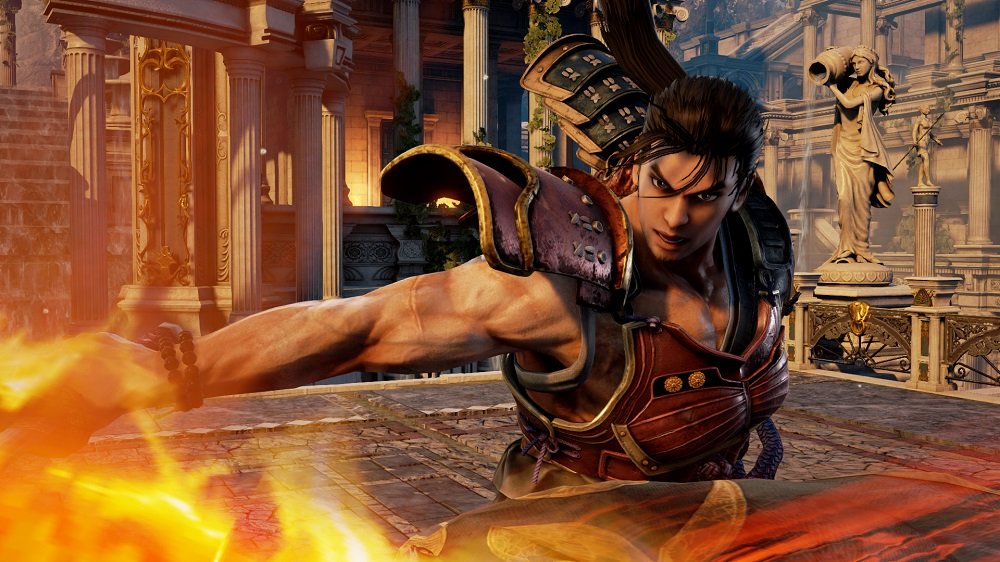 The developers, speaking in interviews, have commented on how they want to make impressive-looking moves accessible to new players, allowing them to engage in pulse-pounding, cinematic fights even if they’re new to the franchise. Well, it doesn’t get more accessible than one-button supers.

If you have enough meter, you can unleash your character’s Critical Edge maneuver with a simple strike of R2. These can be easily blocked on reaction, so players will need to either combo into the super or otherwise confirm the hit. But yep, one-button supers, resulting in a cool cinematic and hella damage. It is what it is, guys ‘n’ gals. 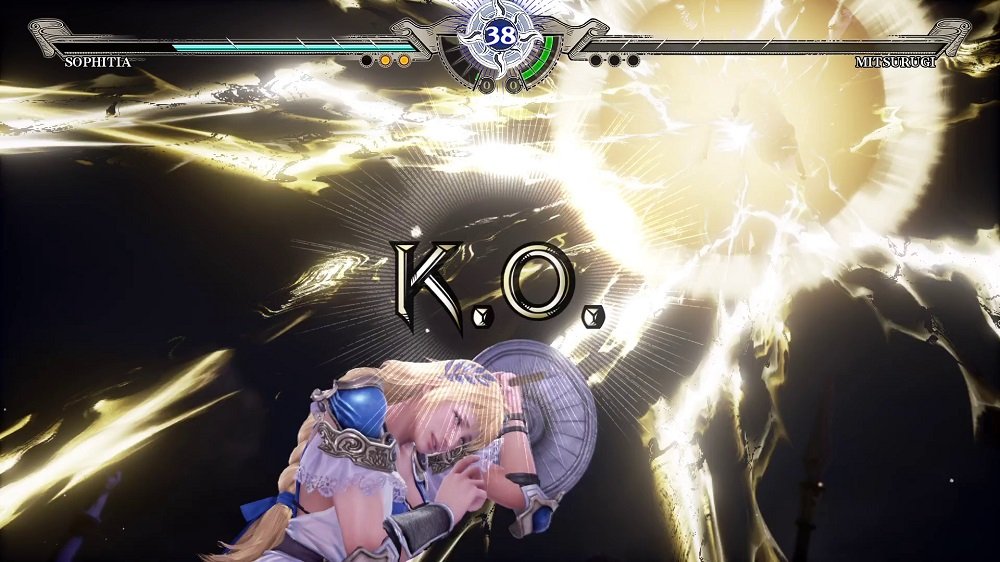 Another new addition, which provides visual drama to the fight, is the all-new Reversal Edge system. Reversal Edge is not dissimilar to the Clash mechanic of Injustice. Once activated with R1, the fight goes into brief slo-mo, ala Tekken 7, with both players given the opportunity to throw out a slash or defensive maneuver. This results in a Rock, Paper, Scissors style outcome, with the successful player either opening up a combo, or perhaps dodging a strike, thus leaving the enemy open for counter-attack.

Some people are referring to the Reversal Edge as being a “mid-fight QTE”, but that isn’t really the case, as the opportunity can still be wasted if the successful player doesn’t capitalise on their advantage. While more experimentation needs to be done to ascertain the true potential of Reversal Edge, it doesn’t seem to be the game-breaker some fans are concerned it may be. 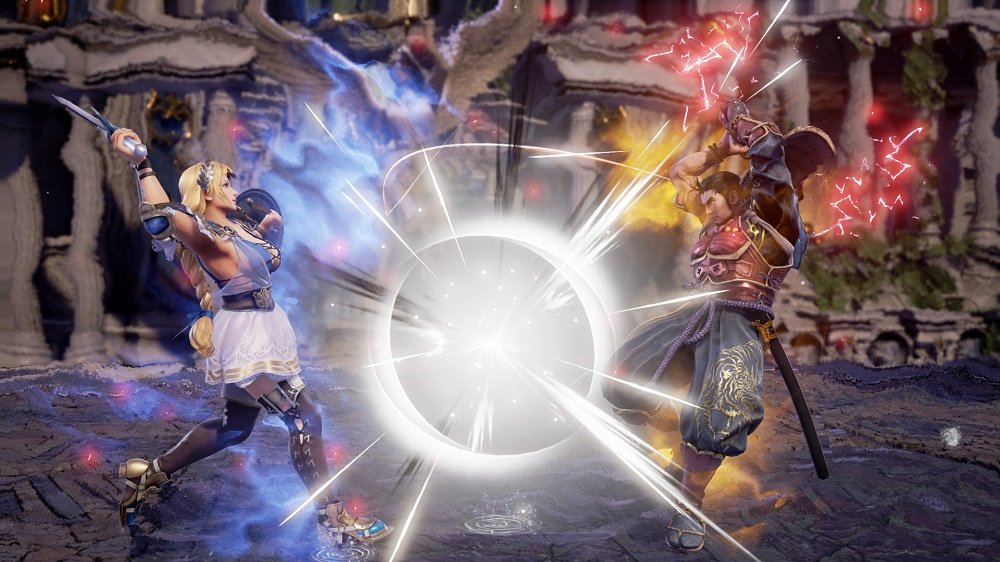 In terms of any negatives, I felt that character movement seemed a tad jerky. Not so much in attack, but in actual traversal of the arena. Though the game is very responsive and retains its swift, eight-way movement, I thought the characters seemed “stuttery” as they dashed back and forth — or indeed in and out — of the playfield. The limited movement animation possibly compensates for the somewhat longer attack-startups.

It feels great to be hyped about Soulcalibur again. Accessibility is definitely at the forefront of SCVI, but extended combos, well-timed juggles and visually-impressive weapon-play will be rewarded to those who wish to dig deeper into the game’s mechanics, new and old.

I can only guess as to whether Soulcalibur VI will find the army of new followers that it is clearly aspiring for, but I certainly felt a satisfying pang of ’99 nostalgia, and was left eager to get to grips with some more forgotten faces, such as Seung Mina or Cervantes. Hopefully, these feelings will echo with other Soulcalibur veterans, who will also dust off their old swords, spears and staffs, before stepping up for one more battle on the Stage of History.

[Travel to this event was provided by Bandai Namco.]