Do not adjust your night-vision goggles. That header image is, in fact, a shot from the latest DLC for squad-based shooter Tom Clancy’s Rainbow Six: Siege. You would be forgiven for thinking a Levi-clad demi-woman with branches for arms might not be the most common sight in a counter-terrorism, tactical FPS game, but indeed she is.

She is a “Rooter,” one of the many virus-ridden creatures assaulting Team Rainbow in the upcoming event Outbreak. This new mode launches in Siege next month and sees a selection of Rainbow’s finest square up against an array of ungodly creatures, spawning across apocalyptic maps. I was fortunate to get some hands-on with the bizarre event at the Six Invitational tournament, which let me check out how the gory, rapid-fire action sits within Siege‘s usual one-shot-one-kill gameplay. 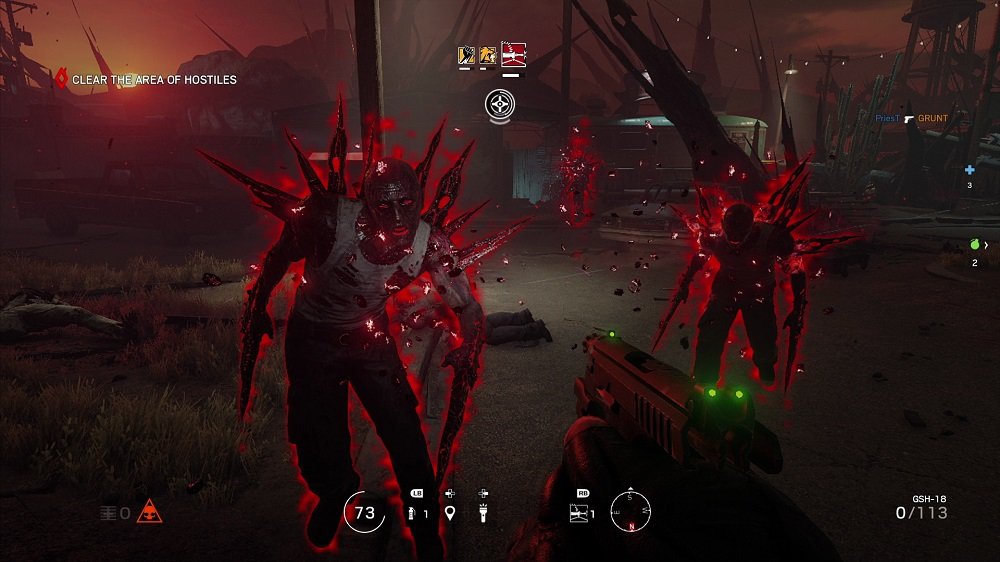 Sitting down with two fellow players (as Outbreak allows for a team of three), we had to choose which of Rainbow’s Operators would take on the waves of glowing, pus-filled creatures. On offer were Ash, Glaz, Doc, Smoke, Buck, Ying, Tachanka, Kapkan, and ever-faithful Recruit. Also available in this mode are new kids Lion and Finka, who’re coming to Siege as part of Year 3’s Operation Chimera. With fellow players selecting recon-man Lion and healer Finka, I thought it prudent to bring the pain with walking battlefield Tachanka. Pity I can’t aim for shit, right? Oh well.

We strode into the blood-red night in what appeared to be a ramshackle suburb, one that had been renovated by gross giant mutations. With explosives expert Thermite guiding us by radio, we picked our way through the streets, taking down the grim infected (or “Grunts”) that initially seem sporadic, but multiply into gangs once you open fire. Players can quickly become overwhelmed, requiring help from teammates when knocked into a defenseless down-but-not-out state. 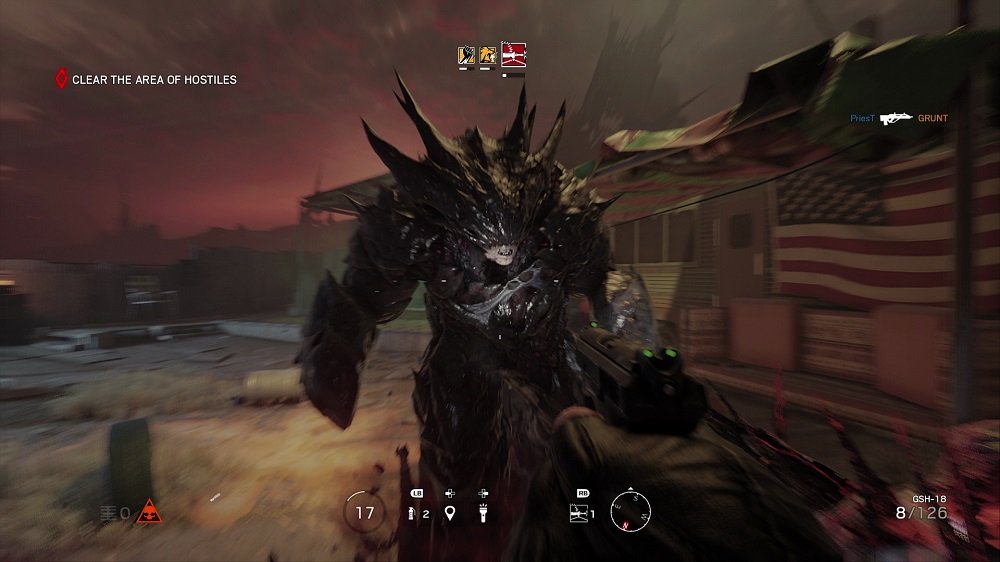 Headshots are encouraged, as bullets to the body, though effective, cause the creatures to mutate horrid growths, which provide them with armor and do little to stop them from bum-rushing you en masse. Slick headpoppers will have more success moving through the horde than chumps like me, squeezing the trigger like Arnie in Commando.

As we moved through the town, completing objectives such as finding a cache of explosives and locating the house of Patient Zero, the infected just got bigger and badder. These included the “Breachers”; fast-moving, acrobatic enemies that detonate upon impact, blowing holes in both walls and your ribcage. The “Smashers” are huge armored behemoths that charge you, wiping out any obstacles in their path. The best tactic for these giants is melee to the back, where their core is exposed.

The aforementioned “Rooters” attack from a distance, burrowing a maze of thorns into the ground to fasten hapless victims in place, while “Apex” is a boss creature that can rally troops to its side while bombarding you with blinding projectiles, the last thing you need in what is already a messy visual affair. Despite our combined skills, Outbreak presented a tough challenge and our team fell inside a huge barn while trying to destroy the roots of the growth. Our weakness was ultimately a lack of strategic communication. Also, having me on the team. 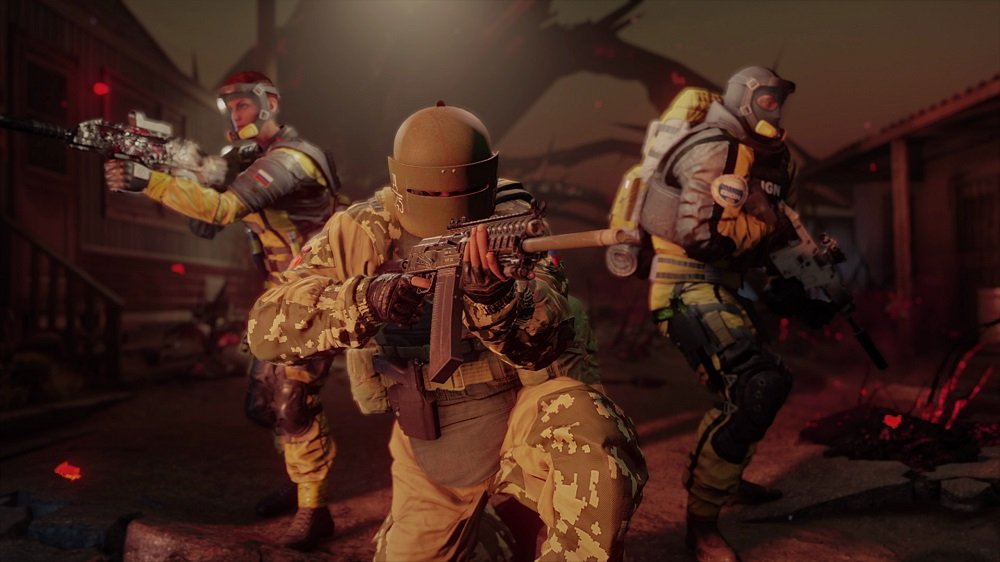 Let’s get it out of the way: it’s a Left 4 Dead/CoD Zombies variant. There are no two ways about it. Your team machine guns through masses of charging creatures, whilst performing simple tasks such as finding explosives, moving cranes, flicking switches, and fending off time-based waves of enemies. This isn’t to say that Outbreak is bad because of its similarities to those titles (both of which are now years old), it’s just another of those experiences, albeit within a different game.

Where it differs from both L4D and Zombies mostly comes from team synergy. As each of the Operators on offer are equipped with a variety of skills, then character selection becomes far more important than it does in other zombie smashers. In our case, Lion could use his recon drone to pinpoint a cluster of infected within a shack, allowing me to then light the place up with hot steel rain before they even knew we were nearby. It’s this communication and combination of abilities that give Outbreak its own gameplay style. 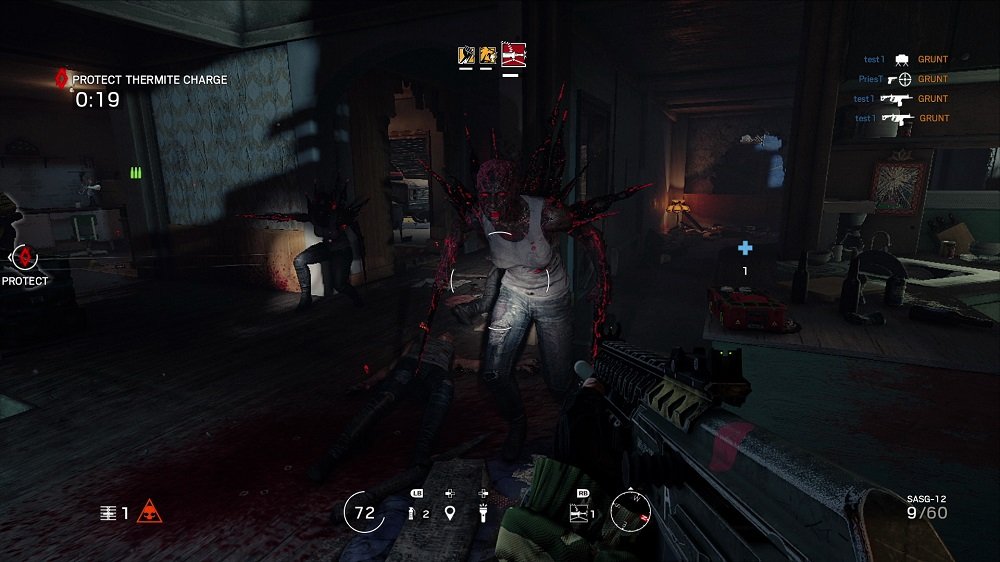 There is a undeniable weirdness to playing Siege in a form that finds you spraying lead all over the place, chucking explosives with reckless abandon and, God forbid, actually running out of ammo. It’s an unavoidable reality that the mode sits oddly alongside what Rainbow Six Siege is all about, namely inch-perfect silent movement and pinpoint accuracy.

But, surprisingly, Outbreak provides a great catharsis to the main game. I can imagine playing through several standard rounds of Siege, then cutting loose in Outbreak afterwards, just to relax the pressure off a little, and offload that salt I seem to constantly carry around. It’s a fun alternative to counter-terrorist activities of general Siege, a bit of good old-fashioned mayhem, which still rewards accurate shooting, smart teamwork, and clear communication. Huh, maybe those skills are transferable after all.

Outbreak is a sidestep off of Siege‘s beaten path, which allows us to see the famous Operators thrown into a completely different environment filled with out-of-this-world enemies, an antithesis to all the crawling, leaning, and CCTV-watching of the main game. It’s a fun, if shallow, side-quest — a spin-off show that lets you take a break from the regular characters and locations. No one has to really worry about it “Not being true to Rainbow Six.” It’s a damn kooky concept, sure, but as long as it’s done well and provides buddies with good times, then such variety can only be welcomed.

Outbreak comes to Rainbow Six: Siege on PS4, PC, and Xbox One between March 6 and April 3.

[Travel to this event was provided by Ubisoft.]