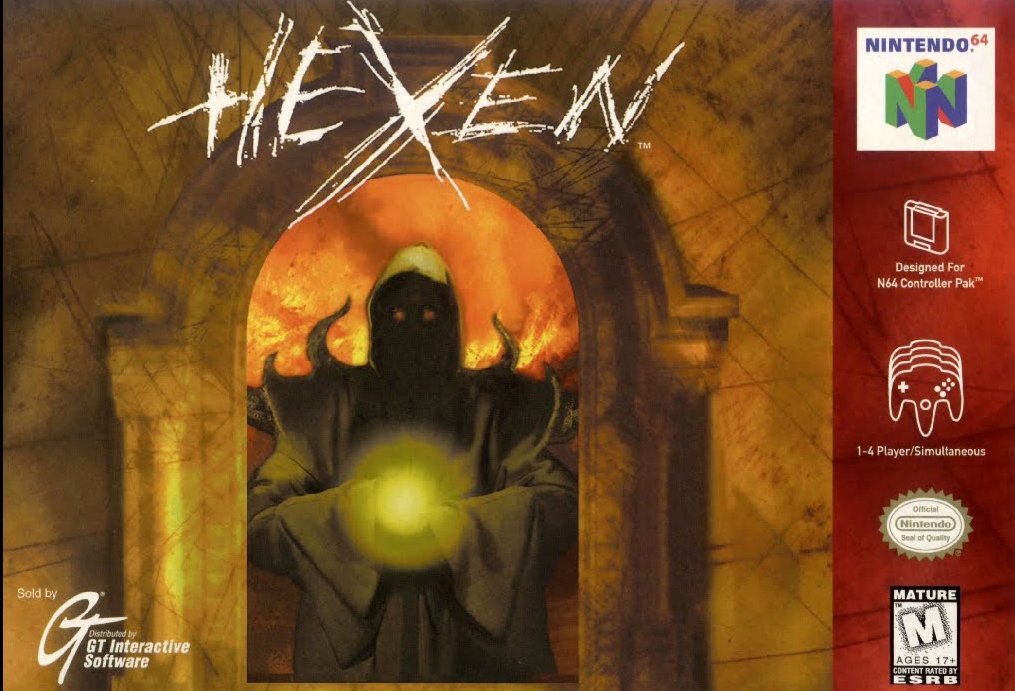 End the year on a low note

Hexen is harrowing. It’s like looking into a dark pit and realizing the pit has no bottom. It’s like realizing that somehow the ground gave way beneath you and you’re suddenly tumbling into that infinite pitch black abyss below. It is the knowledge, the horrible, perfect knowledge, that darkness and fear is all your existence will be as you tumble forever in utter oblivion.

I had forgotten until last week. When over drinks with visiting family we broke out the old Nintendo 64 to nostalgically leaf through some games. We saw all the classics. GoldenEye with its multiplayer bliss. The surprising depth and competitiveness of Mario Golf. The adventurous exploration of Zelda: Ocarina of Time. Good times, treasured memories. But then, an ominous red cartridge caught our attention, a stranger in a box of familiar old friends. There was a moment of confusion, a face we could not place. But then, in a terrible shared collective rush we remembered Hexen, and the curse it placed upon our childhoods.

Of course we had to play it.

Hexen has a killer pitch. It’s an FPS from the minds that brought the world DOOM, but all the high-tech plasma guns and rocket launchers have been replaced with swords and sorcery. Instead of Cyber-Demons, there are just normal demons. The Space Marine of Phobos exchanged for a cast of fantasy archetypes, a Fighter, a Wizard, and a Cleric, each with different strengths, gear, and playstyles. Who wouldn’t want to give a game with that kind of promise a shot?

Like an angler fish, that pitch is the shiny distracting light that hides a gaping maw of razor sharp teeth. “DOOM, but like D&D” was the hollow, empty promise that suckered so many of us into a pit of despair back in 1995. How many of us were duped into paying money for one of the foulest experiences on the N64?

I failed that test. After we dusted off the cartridge, booted up Hexen, I’d forgotten what I used to know. You see, I’ve always been partial to Clerics in the fantasy milieu, so I picked him for our first (of many) attempts. This turned out to be an exercise in self-flagellation.

The Cleric may be a man of God, but he is not a man of strength. He is a frail mortal, with a weak arm and little endurance. If you start the game expecting to kick ass and take names like the DoomGuy, you will be sorely disappointed by the Cleric’s inability to do harm (perhaps the result of some poorly considered vow).

The problems manifest immediately when confronted with the very first ogre in the game, the weakest of enemies. It takes about 8,000 swings of the Cleric’s mace to kill this lowliest of imps (I may be exaggerating, but only slightly). Conversely, every time the monster slaps you back, it gouges out about a third of your hitpoints. In most games, the first few enemies serve as instructional punching bags. “This is how you stomp a Goomba.” Or, “this is how you fire your pistol.” In Hexen, the very first fight is a bumbling affair of panicked backpedaling and flailing strikes. There is no other strategy than to run away while ineffectively swatting at the enemy like trying to shoo a raccoon out of a trash bin.

Just going by the numbers, mathematically it’s a minor miracle whenever the Cleric ever makes it out of the very first room alive. I’d say his survival was proof of his faith, that his appeals to a higher power had been answered. But we must remember, he is still a character in Hexen – God has abandoned him.

No, there will be no salvation for our poor Cleric. His prayers have been intercepted by demons and twisted into cruel taunts. Yes, he will occasionally survive, but only to witness more of the hopeless nihilism we call Hexen. This is the cruelest fate of all.

After several deaths, we switch to the Fighter, placing our faith in a gauntleted fist where prayer had failed us. He fared little better. While perhaps slightly stronger, the Fighter shares the same weakness as the Cleric, a reliance on a melee attack. As long as he has to get within arms reach of a monster, he will always be doomed to clumsy backpedaling and embarrassing cowardice.

No, eventually we stumbled on the only real choice of a hero, the Wizard. But this only revealed to us the full scope of Hexen‘s misery.

The Wizard is not particularly powerful either, since he must also peck away at enemies for a sickening amount of time. But with the power of his magic staff, he can do so from a comfortable distance, and this makes all the difference. Combat isn’t difficult for the Wizard, merely tedious. This was fitting. At this point in the evening, tedium was the dominant force in the room. The joke had already worn thin.

There are plenty of games that are bad but entertaining. Strange curiosities that endear themselves despite their flaws like Wu-Tang: Shaolin Style. Or games that are so terrible they become a kind of dadaist art piece like Silver Surfer on the NES. Not Hexen. Hexen is sour milk, unpleasant and off-putting, nothing you want to take another sip of.

But at this point we were committed. We had to see more than just the starting area, if only to confirm what we remembered about the rest of the game. The unending portal puzzles, the cheesy enemies, the cheap traps. We needed to peel back the veil of time and forgetfulness to truly appreciate what Hexen was.

So we played as the Wizard and we quickly learned the path to success. To win, all we needed to do was simply stand on a staircase or in the doorway to a narrow hallway and fire away with the Wizard’s staff. These small obstacles were all it took to stymie the demonic forces of evil, whose cloven foot apparently never adapted to this kind of terrain. Instead of coming to slay us, monsters would instead meander back and forth at the foot of the steps or in an opposite doorway, hopelessly confused.

This kind of weak pathfinding would be laughable in any game, but it’s boggling in Hexen. In its gothic pastiche, 90% of the landscape in Hexen is made up of staircases and narrow hallways. The enemies cannot navigate the basic structure of the world they live in.

So this is how we spent a good chunk of the evening, ruthlessly exploiting the AI. But for all we could tell, this is how the game was meant to be played, the ideal Hexen experience. Because to have any hope of success in Hexen, you have to abandon the idea that you are playing a video game for fun. This is toil. This is perdition. You must atone for whatever wrong you have done that has led you to playing Hexen on the N64. Like Job, your role is to endure and suffer, not to revel and enjoy.

Nothing hammered this lesson home as firmly as the first item we found, a mysterious potion bottle labeled “Flechettes.” You are given no other information about what it is or what it’s for. Maybe there is an explanation for it in a manual somewhere, but those instructions have been long lost to time. For now there is only one way to discover its purpose. So we experiment, pressing the item button. The green bottle appears before us for a split second before exploding in a cloud of noxious gas that instantly kills us.

A cruel joke? No. This is the one mercy Hexen deigns to extend. A defacto cyanide capsule. A way for players to end it quickly and on their own terms.

We try again on the next life, assuming maybe you need to hold the button for a bit, like winding up for a pitch (you know, the way grenades traditionally work in every other game). This resulted in the bottle shattering in our Wizard’s hand, another ignoble death.

The third time, we have it figured out. We’re going to wait until we reach an area where we can funnel a bunch of monsters into a tight choke point. This is where we will lay our trap. Steeled by death and educated with suffering, we find just the right situation, leading a train of monsters like the Pied Piper into a hallway. We press the item button and scramble backwards, certain we’ve finally figured it out.

The monsters howl in low-bitrate agony, the potion clearly doing damage. But they’re not dying. Not at all. Soon they shuffle through the gas and we’re forced to poke them them to death with the staff as usual, a little easier, but far from the master stroked we’d hoped for.

This is disappointing of course, but don’t forget, for Hexen, disappointment is only the beginning. Not satisfied with merely frustrating us, now Hexen must rub our nose in humiliation. The noxious green cloud of gas, so ineffective against the monsters but so instantly lethal to the player, hangs in the air for an absurd amount of time. Of course, we cast it in a narrow hallway while retreating; we need to move past it but we can’t until it fully dissipates. All we can do is wait in silence and contemplate our life choices.

Hexen is a game that will fart in your face and make you stand there and take it.

We turned the system off at that point. What more needed to be said? There is no moral to this story. No light at the end of the tunnel. Just more darkness. The holidays are a time to reminisce, to remember years gone by and how far we’ve come. This year we gazed backwards and glimpsed a monster.

I guess it was the perfect game to close out 2017.