When I was on my plane to Seattle, getting ready to play some games, meet some gamers, and prepare for tomorrow’s Destructoid LIVE panel, I never thought I’d be leaving the first day of PAX with the ability to say that I have played Duke Nukem Forever.

Sometimes things happen that are so bizarre, you don’t know how to process them.

I played Duke Nukem Forever today, and I liked it.

[Note: Please excuse the poor quality of the photographs. We were caught short and had to improvise with my video camera.] 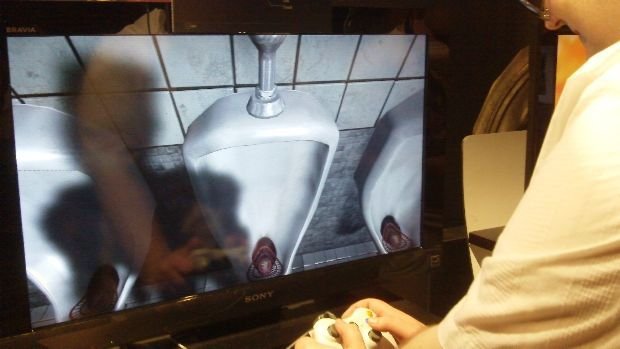 Do you know how you can tell that a game is going to be something special? When it starts with a tutorial telling you how to piss into a urinal. That’s how the demo for Duke Nukem Forever starts, and it really doesn’t get much more highbrow than that.

At its core, Duke Nukem Forever is a solid first-person-shooter. The controls at this stage feel a little loose, but the fundamentals are sound. As you might expect, the gameplay doesn’t exactly have a modern feel, but that’s part of the charm. It feels like a Duke Nukem game — rough and ready, but it absolutely does the trick.

The demo was full of weaponry, ranging from the standard pistols and shotguns to the explosive Devastator, the machine-gun like Ripper, the sniping Rail Gun and the all-important Shrink Ray. Shrinking a porcine alien and then squashing him with a deft melee attack never felt so satisfying. 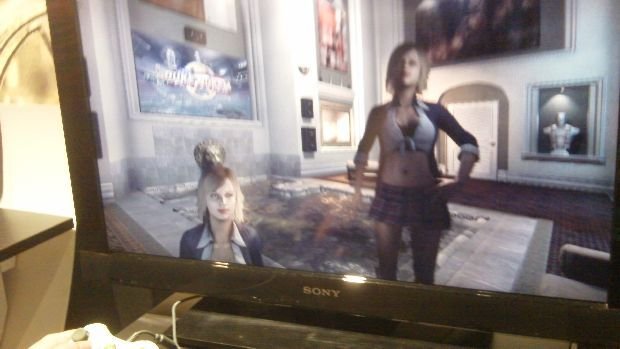 Duke is capable of performing finishers if he can cripple an alien into a dazed submission. A simple button press and the chewer of bubblegum will perform a gruesome execution. As if ticking all the FPS boxes, there are also gun turret sections. This is not a game that intends to innovate. It just intends to kill loads and loads of bipedal pigs.

As well as the shooting, Duke will also get to drive a logo-branded vehicle. Controls for the driving sections are decent and do a good job of getting our hero from A to B, although the car itself is a little bit bouncy, and there’s plenty of risk of flipping it. Fortunately, Duke can get out of the car and flip it back. In any case, it’s a fun break to just mow down enemies in your car, and at this early stage, with vehicular sections blended into the main gameplay, it doesn’t look like this new form of play will intrude. 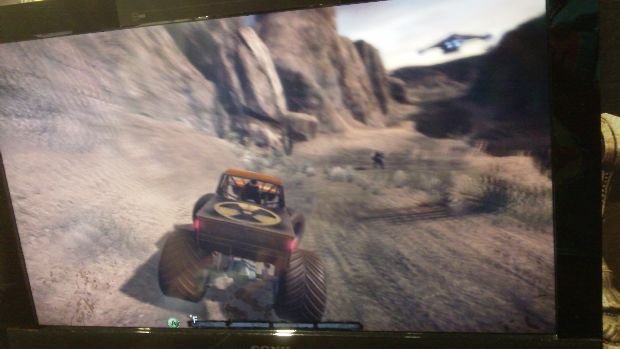 One of the highlights of the demo is a huge boss fight against a one-eyed monster, the same fight you may have seen in screens leaked from the game’s long-winded past. Armed with explosive missiles, it’s a pretty easy first boss fight, although when it starts boosting toward Duke and kicking him over, things get a little hairy. The fight takes place in a football stadium, which comes into play during the battle’s grand finish, when the boss’s eye falls out, and Duke proceeds to kick it over the goal in a glorious finisher.

And that, right there, is the kind of thing that is making Duke Nukem Forever look so very promising. As a game, it looks very standard, with graphics that look like they belong in a game that started development twelve years ago, and shooting foundations that don’t feel evolved. As a piece of shameless, crass, unapologetically immature cavalcade of humor, however, Duke Nukem Forever may very well be genius. 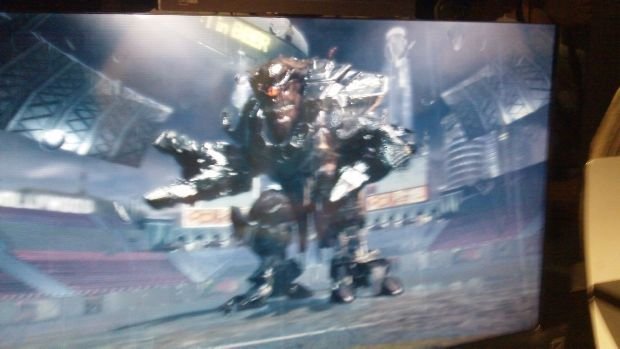 Gearbox Software is possibly insane for taking on this project, a game which has twelve years of expectations and notoriety behind it. However, the studio has risen to the challenge and created a game that feels so incredibly Duke that you have to respect it no matter what. This is Duke Nukem at his puerile finest, and just from the demo, I was laughing out loud. It’s not even that it’s particularly witty. The humor is just so incredibly stupid that it starts to take on the illusion of brilliance, and that’s what matters.

Do you know how you can tell that a game is going to be something special? When its demo ends with the main character getting his dick sucked by twins, then admits that his game better be good because it “took twelve fucking years” to make.

Duke Nukem Forever is something special indeed. Tits and pigs and kicking eyes like footballs conspire to make this a serious game of the show contender for me.