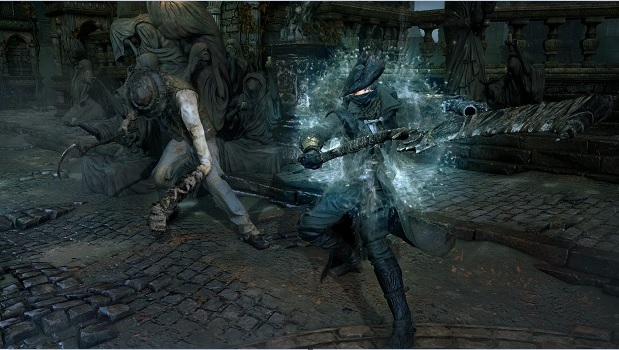 If everyone around you’s a jerk, maybe YOU’RE the jerk

Maybe it shouldn’t come as much of a surprise, but the beings hanging out in the Tokyo Game Show showing of Bloodborne weren’t exactly enamored by my presence. That’s putting it lightly. Cautiously trekking through the village that the demo thrust me into, I quickly found out that none of them wanted to be my friend, and all of them just wanted me dead.

Some of them succeeded in their mission.

Able to select from a few different characters for the demo, I toggled between a fairly well-balanced build and one that favored agility. Rolling, blocking, and backward jumping to my heart’s content, I disposed of these neighborhood crime watch suspicious suspects with relative ease. That is until they decided that group efforts would be more effective. Turns out these freaks of the night know a thing or two about efficiency and teamwork.

It’s tough to get a real feel for a title like Bloodborne from a 20-minute demo without time to flesh out a unique character. I mean, it was Souls-esque with more fluid feeling controls in a setting that actually sets itself apart from the Souls series. That’s grand; I’m all in. Given that it was my proper introduction to the game (I just kept missing it at other shows), what a fine first impression. But, a cheery visit and maybe a useless housewarming gift would’ve been a bit more inviting than death ad nauseam. I guess that’s just how From Software rolls.