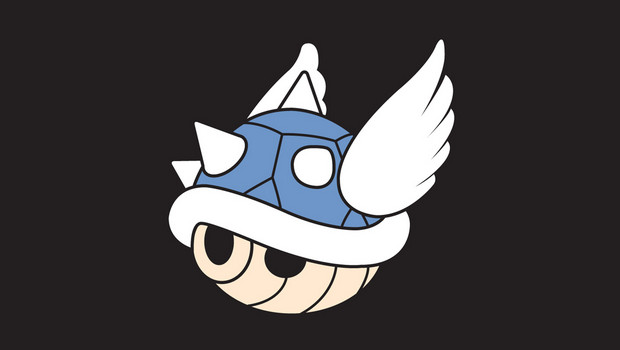 [Dtoid community blogger UsurpMyProse answered our recent call for “I love what you hate” submissions with a most evil confession. Do YOU love something that everyone else loathes? Go tell us about it! –Mr Andy Dixon]

For many of you, I imagine the above image will inspire the kind of raw, blinding hatred that could outshine a billion suns. The mere mention of gaming’s most reviled item no doubt dredges up memories of rage-inducing losses and impotent screaming matches with your television. Since its introduction in Mario Kart 64, the blue shell’s undiscerning path of destruction has claimed countless victims, none bigger than the franchise itself. Many believe this single power-up has turned Nintendo’s seminal racing series into an exercise in pure dumb luck, the spiny specter threatening to turn any surefire victory into a crushing defeat.

Which is exactly why I adore the abysmal thing.

Now, before you dismiss me as some kind of unfeeling monster who sups on the bitter tears of others, please hear me out. I am by no means the malicious sort, and I understand that the abject misery the blue shell has borne into this world is as vast and endless as the cosmos. I myself have been hit by my fair share of explosive Koopa corpses, bounced helplessly around the track and forced to watch powerlessly as I’m passed by second, third, and fourth-place opportunists. The sensation of having the finish line in sight only to hear the warning klaxons of a blue shell approaching from above is a sickening sort of dread that I wouldn’t wish on my worst enemy.

Yet, there’s a certain beauty to the monstrosity that Nintendo has created. The blue shell is the great equalizer. It possesses the power to dramatically alter a match at any given moment. While most people think that kind of power turns races into Mario Party-esque games of chance — which are little more than glorified coin flips — I prefer to think the blue shell represents the same unfair, downright infuriating forces that govern our own universe. Mario Kart has found a way to capture the unique cruelties of life in a game where princesses and sentient mushrooms duke it out for racing supremacy.

I mean, consider what the blue shell represents at each position of the race. To those in first place, the blue shell is the unseen calamity that awaits us all. It is the worst possible thing at the worst possible time. It is the Sword of Damocles hanging over their head, threatening to render meaningless everything they’ve scratched and clawed to achieve. They could have done everything right — hit every shortcut, hit every speed boost, shave every precious second off their lap time — and still be struck down by a blue shell that gives zero fucks about how hard they’ve fought.

The threat of being hit by a blue shell is ever present, and it elicits such a profound mix of anger and helplessness when it happens that I don’t think Nintendo could replicate such a powerful emotional response in any of their other games if they tried. It’s such an unsettlingly true-to-life moment. It’s all the tragedy of your house burning down, or losing a job you thought was secure, or suffering a heart attack at 30. I’m not saying losing a cartoon race is anywhere near as serious as those things, but it does operate on the same senseless governing principle: bad things will always happen, and for no good reason at all.

But for the opponents directly behind first place, the blue shell represents an opportunity to seize upon the misfortune of others. There’s no sweeter sight for a racer than a blue-tinted harbinger of doom passing them by to knock out the jerk in front. Under normal circumstances, the more peace-loving denizens of the Mushroom Kingdom might stop to lend a helping hand if they saw one of their own hit by a concussive explosion. But not in Mario Kart, baby. The titular plumber himself would floor it past a crying Princess Peach if it meant moving up a single spot in the standings.

It’s here, in the blood-thirsty front of the pack, that the blue shell represents the temptation of glory that turns all men into beasts willing to devour the weak. It’s victory at all costs. Granted, this is a competition where participants sling all manner of fireballs and Bob-ombs to edge each other out, but the blue shell is only available to racers in fourth place and below. Anybody in second or third who moves ahead because some lowly grease monkey in the back lobbed off a supercharged game changer is doing so through absolutely no effort of their own. Sure, they put themselves in prime positions, but there’s still something undeniably cruel about leaving the deposed leader in their dust, relishing the same devious twist of fate they’d curse if it had befallen them instead. Mario Kart makes monsters of us all.

And then there’s the rest. The unwashed masses from fifth place to last battling it out for a mediocre finish. For them, the blue shell is false hope. The misguided belief that they can better their position in the game, when all they’re really doing is shuffling things at the top. What good is a blue shell to someone so far out of contention that they’re willing to force their adorable Mario mascot of choice to endure a horrific, Kafkaesque transformation into a rocket-powered bullet just to stay in the game?

It’s a placebo at that point, instilling the empty idea that their effort still impacts the race. That they still matter. But they’re just pressing a button to screw over someone else, someone they likely can’t even see. They know they’re inflicting undeserved frustration on another racer, but they’ll press that button every time, so long as it gives them even the faintest glimmer of feeling important.

It’s another harsh truth about who we are as people. We’ll inflict untold amounts of suffering on others, so long as they’re out of sight and out of mind, and it betters our lives in some insignificant way. It’s Louis C.K.’s “Of course… But maybe!” principle, the one that allows us to use iPhones every day without breaking out into uncontrollable sobbing over all the human pain that went into making them.

So you see, the blue shell is far more than some overpowered item in some silly kart game. Rather, it’s one of Nintendo’s greatest, most multifaceted creations. It’s a sinisterly fascinating cosmic force in the Mario universe, one that encompasses so many bleak truths about the world.

If there’s anything deserving of hate in the Mario Kart series, it’s Mario Kart 8‘s disappointing introduction of the Super Horn. Many celebrated the inclusion of an item designed to counteract the scourge of the blue shell, but it diminishes the unstoppable and inescapable nature that made the franchise’s most loathed item so effective as a work of maddening art. There were a few ways to avoid a blue shell before, but they required certain amounts of finesse and luck, and none were as unsubtle as a magical horn that can simply blast your troubles away. There’s something far more poignant about escaping the most destructive force in Mario Kart with something as pedestrian as a well-timed banana peel.

So the next time you’re hit by a blue shell with victory right within your grasp, rage all you want. Curse the gods, curse your friends, burn Shigeru Miyamoto in effigy, do whatever. But at the very least, respect all the strange poeticism and thematic significance of an all-powerful turtle shell that makes you want to punch a hole in the wall.