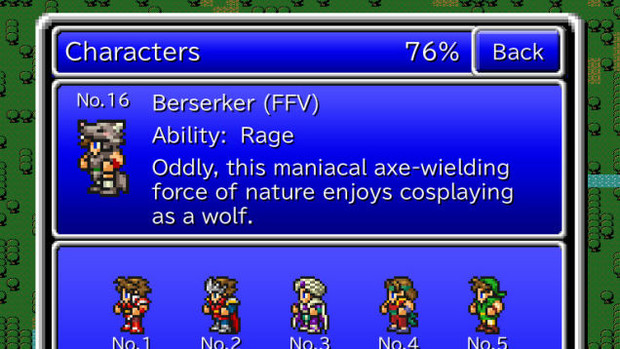 [Dtoid community blogger JoyfulSanity answered our recent call for “I love what you hate” submissions with the one thing in the world I thought NO ONE could defend. Do YOU love something that everyone else loathes? Go tell us about it! –Mr Andy Dixon]

If I told you that someone took bubblewrap and added RPG elements to it, how many of you would (ironically or otherwise) say, “That sounds like the best thing ever! Where is the Kickstarter?” Yet that’s basically what Final Fantasy: All The Bravest is… and everyone in the gaming community can’t seem to stop hating on it.

I mean, okay, the microtransactions are ridiculous and the game can practically be played without even looking at the screen. Those things are awful and I don’t actually begrudge anyone for not liking this game, especially since it used to cost actual money to download (whereas it’s a “free”-to-play title now). As it is, saying I love All The Bravest is about as much of a stretch as expecting Half Life 3 to be actually confirmed this year. Yet despite all of this, there’s one question in my mind that I personally think is more important than anything else when judging a mobile game: is it possible for someone to enjoy All the Bravest without spending even a penny on it?

I am confident in answering that with a “yes,” though All the Bravest will only resonate with a very specific audience in very short bursts. Allow me to explain.

All The Bravest is a glorified grinding/farming simulator, and I am okay with that

As I’m sure you’ve heard countless times before, the battles in All The Bravest have virtually no strategy. Enter battle, proceed to tap/swipe the onscreen heroes until monsters are dead, collect EXP and maybe item drops, rinse, and repeat. Get to a battle that you can’t win? Get back to that world map and continue to grind and farm until you can! Yes, technically you can brute-force through everything in this game using microtransactions, but let’s be real here; All the Bravest clearly targets fans of RPGs, and this is an audience that is probably used to grinding to defeat overpowered bosses.

That’s literally the whole game. It’s mindless, repetitive, and oddly satisfying. Battle sequences are lively spectacles with abundant attack animations and sprites flying everywhere, and the average battle lasts anywhere between a couple seconds to under a minute. Though all the game’s resources are taken from previous Final Fantasy titles, the graphics look crisp and the nostalgic soundtrack sounds as clear as 8 and 16-bit tunes can be. Most importantly, there is no actual mandatory paywall between the game’s intro and it’s finale: though KO’d party members are revived every three minutes during battles, nothing stops the player from exiting to the world map with a fully regenerated party for some repeated grinding of easier enemies. It’s only at the very end of the game that bosses may need at least two sessions to defeat, but otherwise the player never needs to “wait” like in many other free-to-play titles.

All The Bravest‘s mindless gameplay doesn’t hold a candle to even a low grade Final Fantasy spinoff title, but it’s a great game to play during commercial breaks, bathroom breaks, or any <5 minute period of downtime in general. Any more than that and the game admittedly gets dull, but that’s the beauty of it; I don’t need the complexity of a proper Final Fantasy game if I’m going to play it in such short bursts. Sometimes I just want something occupy my attention for a couple minutes that’s just as easy to put away as it is to pick up. When viewed through this lens, All The Bravest is a success. It’s a pleasant time-waster for certain RPG/Final Fantasy fans, and I see nothing wrong with that.

Conversely, All The Bravest is a scathing, unintentional satire that challenged the way I look at JRPGs

From the very beginning, it struck me that “All The Bravest” had the same acronym as “active time battle,” which Final Fantasy players might recognize as the name given for the battle system of the SNES and PSX Final Fantasy titles. While I understand that this acronym similarity likely refers to how an “ATB” gauge needs to be filled for individual characters to attack in All The Bravest, it made me ask a question that nearly drove me to madness:

“Does Square Enix think this is what the essence of the ATB system is?”

It made me think back to Final Fantasy XIII, a game that famously reinvented the franchise’s ATB system in a way that dumbed down the strategy and let players basically autobattle for most of the game. Hey, mindlessly hitting autobattle isn’t that different than mindlessly swiping your finger across your phone screen; is this a reflection of a design philosophy from Square Enix that the ATB system should be flashy and fast and not necessarily strategic? Do regular battles in Final Fantasy XIII even mean anything? Do regular battles in any RPG even mean anything?

The descent into madness only got worse from there. I thought back to how in even my favorite JRPGs I would often spam the attack command to resolve regular battles, with occasional healing as necessary. Was I getting anything more out of those games than I was out of All The Bravest? Even action RPGs like Kingdom Hearts sometimes have me just mindlessly mashing the X button over and over until I win. At what point does a turn based battle system go from strategic to monotonous in even a well-designed game? Is it safe for me to criticize All The Bravest without also criticizing some of my favorite JRPGs at the same time?

In the end, All The Bravest made me realize how the most important parts of many JRPGs had nothing to do with combat, but rather what’s all around it

For many JRPGs, the greatest joy lies in exploring a foreign world, outfitting your party with upgraded gear, and learning new skills that can dispatch enemies faster than before. A combat system doesn’t necessarily have to be deep to be fun; combat merely needs to be a playground for players to reap the rewards of their careful exploration and character building. For example, check out this video of the ultimate boss of Final Fantasy IV Advance being defeated by the player only hitting the A button. By definition, it’s a pretty mindlessly fought battle, but it’s satisfying because victory was only possible due to the player’s careful preparation for the battle.

It can be easy to believe that combat is the most important part of any JRPG, but comparing All The Bravest to other classic JRPGs shows how important exploration, story, and customization is to creating a fun experience. To that end, I’d say All The Bravest is a must play for that reason alone, and I could even continue with how the game satirizes JRPGs and JRPG players beyond this point.

But even with all of that said, I sincerely believe All The Bravest isn’t quite as bad as the gaming community at large believes it to be. Yes, the microtransactions are ridiculous, but compared to numerous other popular free-to-play titles, the grind to get around them really isn’t that bad. Honestly, if the DLC characters could be unlocked with in-game gil, the DLC worlds cost between 3-5 dollars to unlock altogether, and the “unlocking characters via Twitter” system were taken out, I would say All The Bravest would be an easy recommendation. It’s fast, it’s flashy, and it’s mindless enough to its benefit, and sometimes that’s all a game has to be for me.

Now excuse me as I check on how many donations my Kickstarter campaign for Bubblewrap RPG has received since I started writing this.