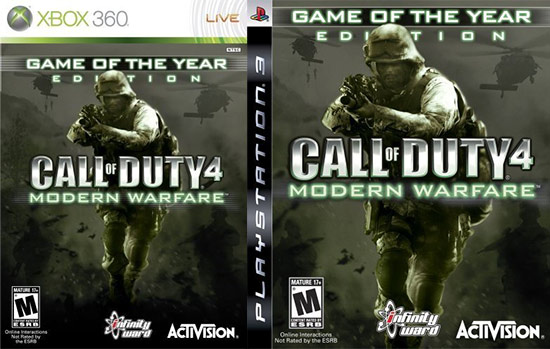 If you’re one of the few people on the planet who don’t already own a copy of Call of Duty 4: Modern Warfare — and if so, you probably either don’t like FPSes or are destitute — then Activision has just the deal for you! They’ve just shipped the Game of the Year Edition for Call of Duty 4, which was one of 2007’s top-selling games. It retails for $59.99 on the Xbox 360 and PlayStation 3.

You may be thinking to yourself, “Why should I buy this edition over the original version, especially when I can get the old one for less than $60?” Well, here’s the skinny. Have you heard about the new map pack that just came out on Xbox Live? It costs 800 Microsoft Points (in real money, that’s ten American dollars), but guess what? The GOTY Edition of CoD 4 comes with a “token” to download the map pack (again, it’s a $10 value) for free!

The press release (after the jump) makes no mention of the PS3 version of the GOTY Edition, but if you check out its listing on Amazon.com, it says this: “The Game of the Year Edition includes a code that allows players to download the Variety Map Pack, a $10 value for free on the PlayStation Network.” So presumably, PS3 owners will be able to download the map pack for free when it comes out on the PSN in three weeks.

But there’s another special surprise for Xbox 360 owners who play CoD 4. In conjunction with today’s launch of the map pack, Xbox Live is currently hosting a Double XP Weekend. So from Friday, April 4 through Sunday, April 6, you’ll be able to work toward your next Prestige mode twice as fast! If you’re not already on Xbox Live with the new maps, hopefully you’ll be there during Friday Night Fights. Hop to it! If you don’t buy the GOTY Edition and/or download the map pack, the terrorists win!

Santa Monica, CA – April 4, 2008 – Activision, Inc. (Nasdaq: ATVI) and Infinity Ward are giving gamers a new offensive with the launch of the Call of Duty® 4: Modern Warfare™ Game of the Year Edition. The title allows gamers to experience the intense cinematic action of the original, award-winning and best-selling title, and includes a token for the Call of Duty 4: Modern Warfare Variety Map Pack, available now exclusively for download via Xbox LIVE® Marketplace for the Xbox 360® video game and entertainment system from Microsoft.

Exclusively available for Xbox 360 for the next 21 days, the map pack includes “Broadcast,” which features tight corridors and wide open parking lots where large groups utilize close-quarter fighting and strategic maneuvers; “Chinatown,” where night battles well lit by the full moon play havoc against a backdrop of brightly colored lamps, antique shops and neon signs of the local district; “Killhouse,” a desolate warehouse under enemy attack where squads will need to move through building mock-ups and plywood walls in order to full take control of the combat arena; and “Creek,” a large wide-open village in a heavily wooded area where battles are fought between high ridgelines and deep in underground caves.

To celebrate the launch of the Call of Duty 4: Modern Warfare Game of the Year Edition and the Variety Map Pack, Xbox LIVE will host a Double XP Weekend. Starting on Friday, April 4 through Sunday, April 6, players can earn twice as many experience points as they play the new maps on the Variety Map Pack specific playlists.

For information and updates on Call of Duty 4: Modern Warfare, players can visit: www.charlieoscardelta.com.

Filed under... #Call of Duty#Xbox Live