I’ve been playing a lot of the Lord of the Rings LCG (Living Card Game). In the past two months I went from not even being aware that it exists, to creating my own decks in my spare time, to having a dedicated group to play with. It’s one of the most enjoyable games I’ve ever experienced, tabletop or otherwise.

The reason it appeals to me so much (outside of the co-op angle) is the LCG aspect. Although it’s been used many times over in other mediums, Fantasy Flight Games is utilizing this system to peddle cards in fixed sets. There’s no booster packs, blind box randomization, or single-hunting on eBay, you know what you’re getting in every box.

Fantasy Flight and publisher Asmodee Digital are keen to bring that same concept over to the digital edition that’s set to arrive on Steam this year, and I hope every other studio follows suit. 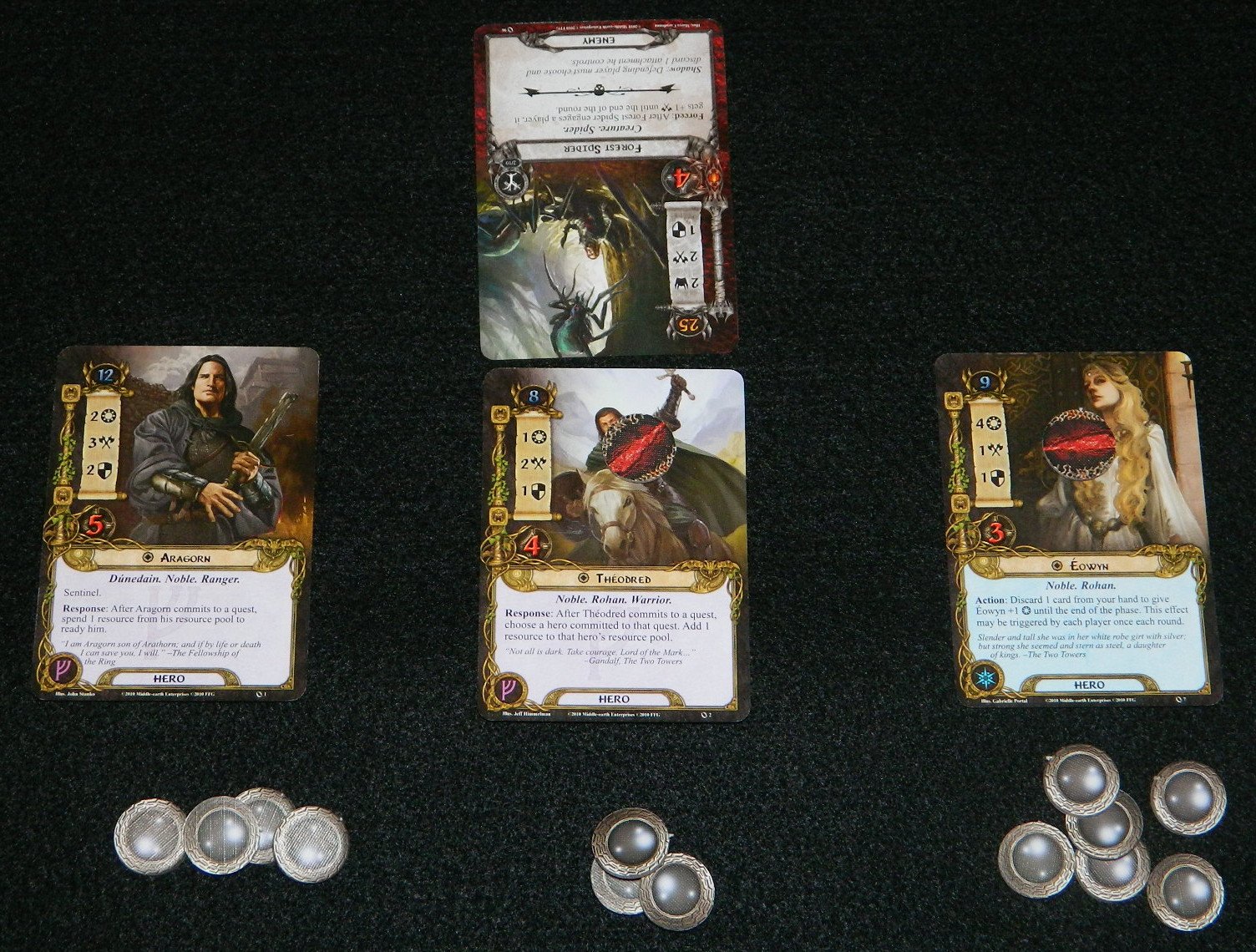 Both the physical card game (above) and the digital conversion (below) are co-op oriented and share some of the same card art, but after watching several demos of the latter, it’s easy to spot the differences. While the former involves more statlines, additional strategies like engagement and location manipulation, and more tactical nuance, the digital rendition is a little more combat focused. Just like Hearthstone cards (or little circle-shaped icons) bump into each other and dole out damage — impacting each other based on their attack values and potentially “exhausting” one another so they can no longer act that round.

Another big gap between the two is that Sauron is now a player, rather than a simulated force based on the order of a pre-shuffled physical encounter deck. He’ll get his own set of cards to use from his hand and he has resources (read: mana) to play them, which will fluctuate based on the difficulty setting. You’ll have to balance your own party (unlike Hearthstone you get three heroes, all of which are far more impactful) to take down each version of Sauron, who sports different cards and enemies in each adventure.

Although I haven’t gotten my hands on the current build yet it looks fun, mostly because I enjoy playing solo experiences on a whim rather than constantly catering to a meta that involves buying more and more blind packs until I have specific cards that I need. With the co-op angle I won’t feel nearly as pressured to buy in and can go at my own pace, deckbuilding and trying out new tactics.

Solo play is going to be supported out of the gate in Early Access with two-player co-op to arrive later. A chat system is in the works, starting with an emote system and then with a full-on player chat that two players can agree to enter. Basically both players have to “check a box,” to enable voice chat and you’re good to go. There “probably” won’t be a text chat system according to FFI.

Fantasy Flight intends to sell “hero packs,” for specific characters, which come with their own sets of cards, bolstered by the earned currency of Valor. Just like the LCG you can buy whatever you want knowing what you’re getting, but there is a caveat. Fantasy Flight Interactive is very clear that they intend to make money to support the game long term, so there are going to be cosmetics involved by way of the “Palantir” system — magical stones in Tolkien’s lore that aren’t inherently evil but are most commonly associated with Sauron. (Which is kind of funny to me — imagine if a game’s lootbox menu was called “the bad place” or something). You can’t buy Valor outright, but you can earn it randomly from the Palantir.

The jury is out on just how predatory this system will be. If you can buy into each season with a “season pass” style purchase and own most, if not all of the cards (something FFI told me is basically possible if you get several tiers in Early Access) that’s fine. If you can’t, I’ll be vocal about it when the Early Access build hits in hopes that the LCG model is preserved in digital form. (Either way the physical card game will still be there, and is still very much alive, hosting a new Rhovanion expansion later this year).

Luke Walaszek, Community Manager for Fantasy Flight Interactive informed me that they’re “specifically looking to not make the system predatory.” They’ve already taken this mantra to heart when removing favor cards from any sort of monetization system — now they’re merely optional seasonal bonuses that you just get depending on the difficulty setting when starting a match. (Things like an extra card or whatnot). Walaszek also says that all progress will carry over from Early Access, with no plans to reset accounts, though anything can happen.

I’m not just jazzed to travel through the forest of Mirkwood with my own digital Fellowship, I’m excited for the future that The Lord of the Rings Living Card Game might bring if it catches on. Provided that they balance out the Palantir system and keep the monetization scheme true to its source material, it could be a guiding light in an increasingly predatory industry. With loot box legislation around the corner (it’s already being self-legislated in companies like Apple and across the world in China), it may launch at a perfect time.