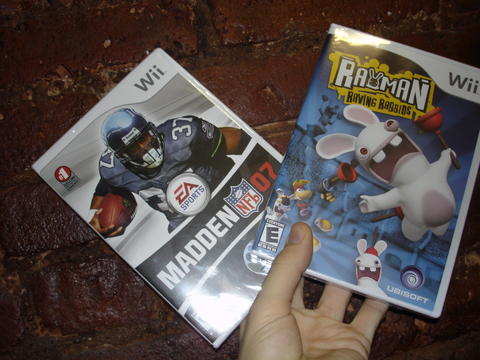 This morning, I got up and had all intentions on heading down to my GameStop just a couple blocks away to see if they had any Wii games for sale. Lucky for me, and you, they did. While most of what they had available was doo doo (we’re talking Avatar, Dragonball Z and Happy Feet here) they did have two very anticipated titles — Rayman Raving Rabbids and Madden NFL 07. So, I bought the later two and you will have video today of each in action.

I was going to pick up Red Steel as well, but they only had copies that were reserved. Also, I asked the manager what was up with his PlayStation 3 numbers and he said they were indeed cut and he wasn’t too pleased. He grumbled: “It’s Sony’s fault, not ours.” Yeah, he wasn’t too happy with Sony.