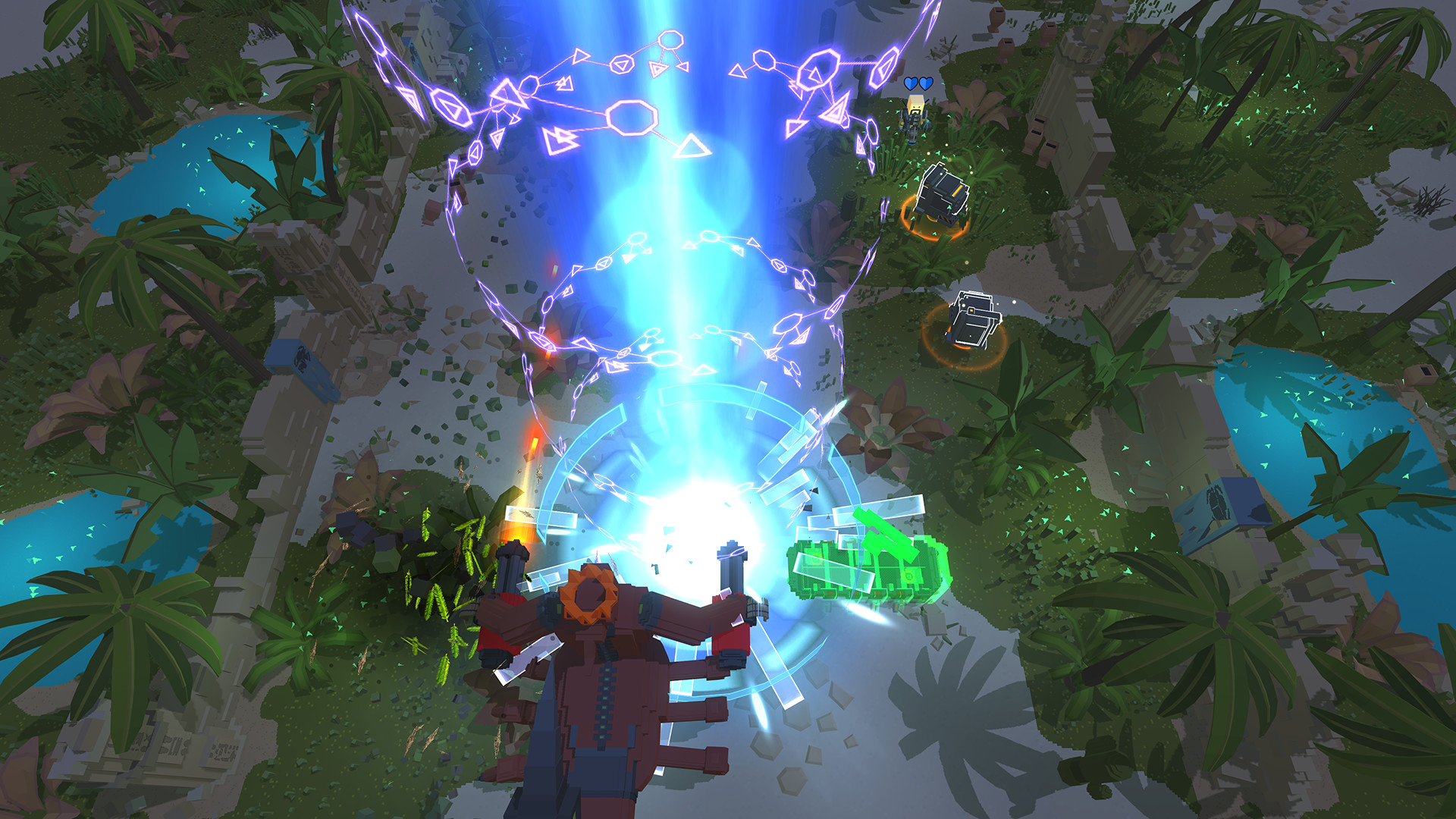 With how mega popular Nintendo’s Super Smash Bros. franchise has been, you’d think more developers would try their hand at making wild crossovers. I know Capcom has been doing it with Street Fighter and Marvel and it’s not like JRPGs have ever shied away from seemingly random mash-ups (Tokyo Mirage Sessions is proof of that), but what about an indie game publisher?

I Hate Running Backwards is basically that: Devolver Digital’s Smash Bros. That isn’t exactly correct, though, because this game isn’t a fighter. Instead, it is a “Shoot Em Down,” as Binx Interactive’s Bernard Bachrach told me. This is like an old-school, on-rails, coin-op shooter (think 1943), just you’re running backwards toward the top of the screen shooting down.

You’ll select from a cast of characters from Devolver’s range of titles (prominent faces being Sam Stone from Serious Sam and Lo Wang from Shadow Warrior) and then unleash hell on a range of enemies from various different games. The demo featured pretty much every enemy from Serious Sam (including those asshole Kleer skeletons) and they were recreated perfectly. The kamikaze guys even had their iconic scream, which is just music to my ears. 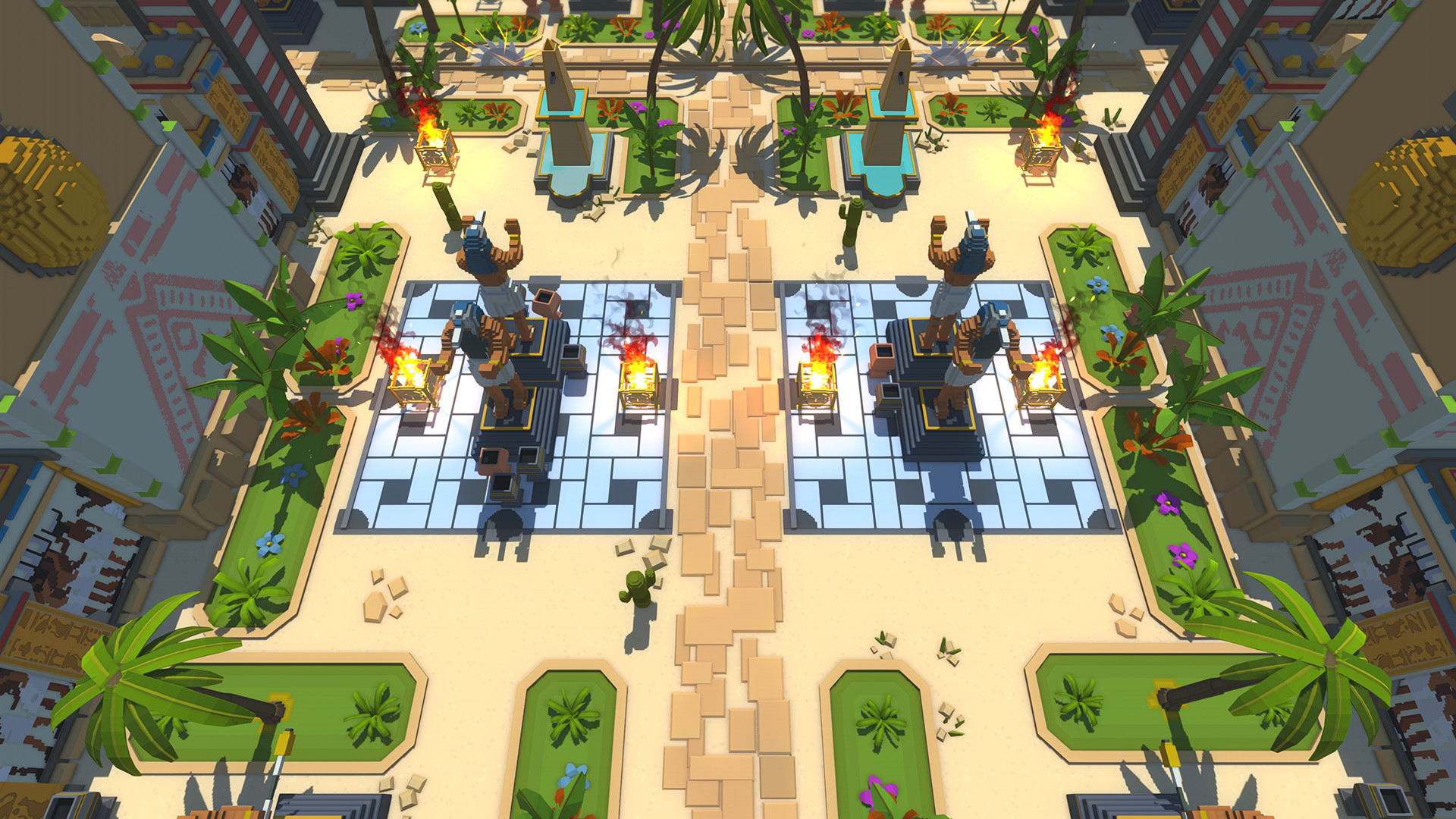 In typical Devolver style, the game doesn’t take itself seriously at all. In addition to featuring gratuitous amounts of gore, the sub-weapons you can pick up have funny names to up the absurdity. The best was this weapon called “The Ass Blaster,” in which you hold a donkey that farts out toxic clouds on enemies.

Each character in the game has specific attributes to them, so Sam Stone can fire weapons faster and Rambro from Broforce has access to grenades. Along with just different weapons, killing enemies will fill up a special meter that then allows you to unleash an ultra attack (which is, again, character-specific). This one disco lady turned into a giant disco ball that could roll over the entire level, but each attack felt gratifying to use.

A big reason for that is each level is entirely destructible. In addition to having guns, your characters also have a melee spin and this can plow through every wall in the environment. If you’re getting pinned into a corner, just knock the damn wall down and keep going. It sort of echoes the chaos that Broforce embodied so well, not to mention it’s always just plain fun to smash things to the ground. 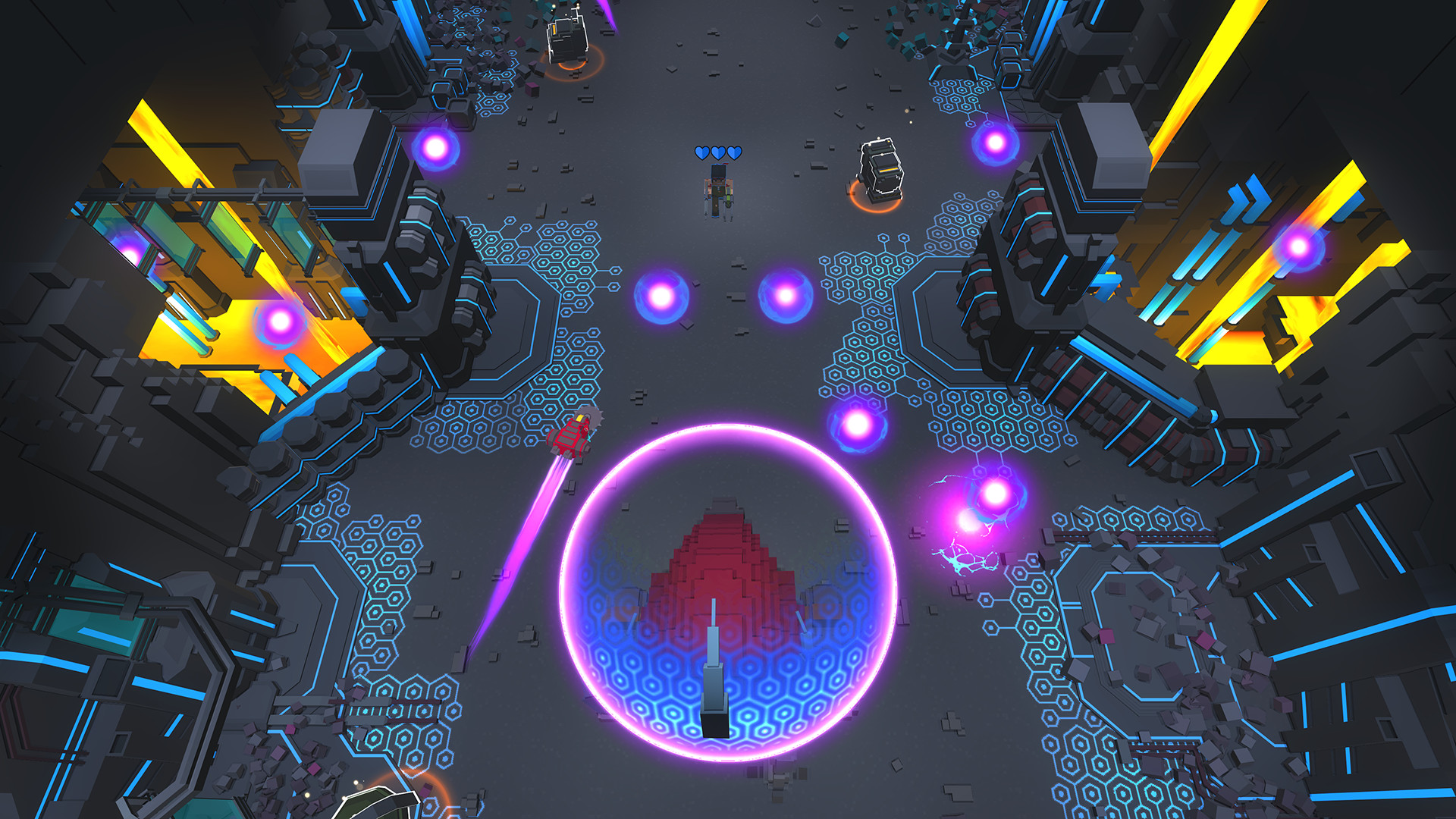 This is all handled with relative simplicity. Since the only direction you can fire is straight down, the game doesn’t utilize a twin-stick setup. You fire with the right trigger, can shoot your secondary weapon with the left trigger, and utilize your special attack with one of the face buttons. The game might be difficult, but figuring out how to perform actions won’t be a contributing factor to your failure.

The one thing that might put people off is that the levels are all procedurally generated. While there are different worlds with specific bosses, the entire goal is to focus more on game mechanics instead of crafting individual levels. I could see this potentially being a problem in the long run, because each level might eventually feel the same. That being said, there are a bunch of unlockable modifiers that can bump up the difficulty quite a damn bit.

While we started on Easy mode, I was very curious how hard this game could get. Bernard then regaled me with a tale from GDC, where the PR rep showcasing the title didn’t understand the relic system. Upon beating bosses in each of the game’s worlds, you’ll unlock a relic at the start which will then populate the levels with a variety of hazards for you to dodge. Since the rep assumed they were just for show, he activated all of them at once and everyone on the show floor couldn’t survive for more than 30 seconds. 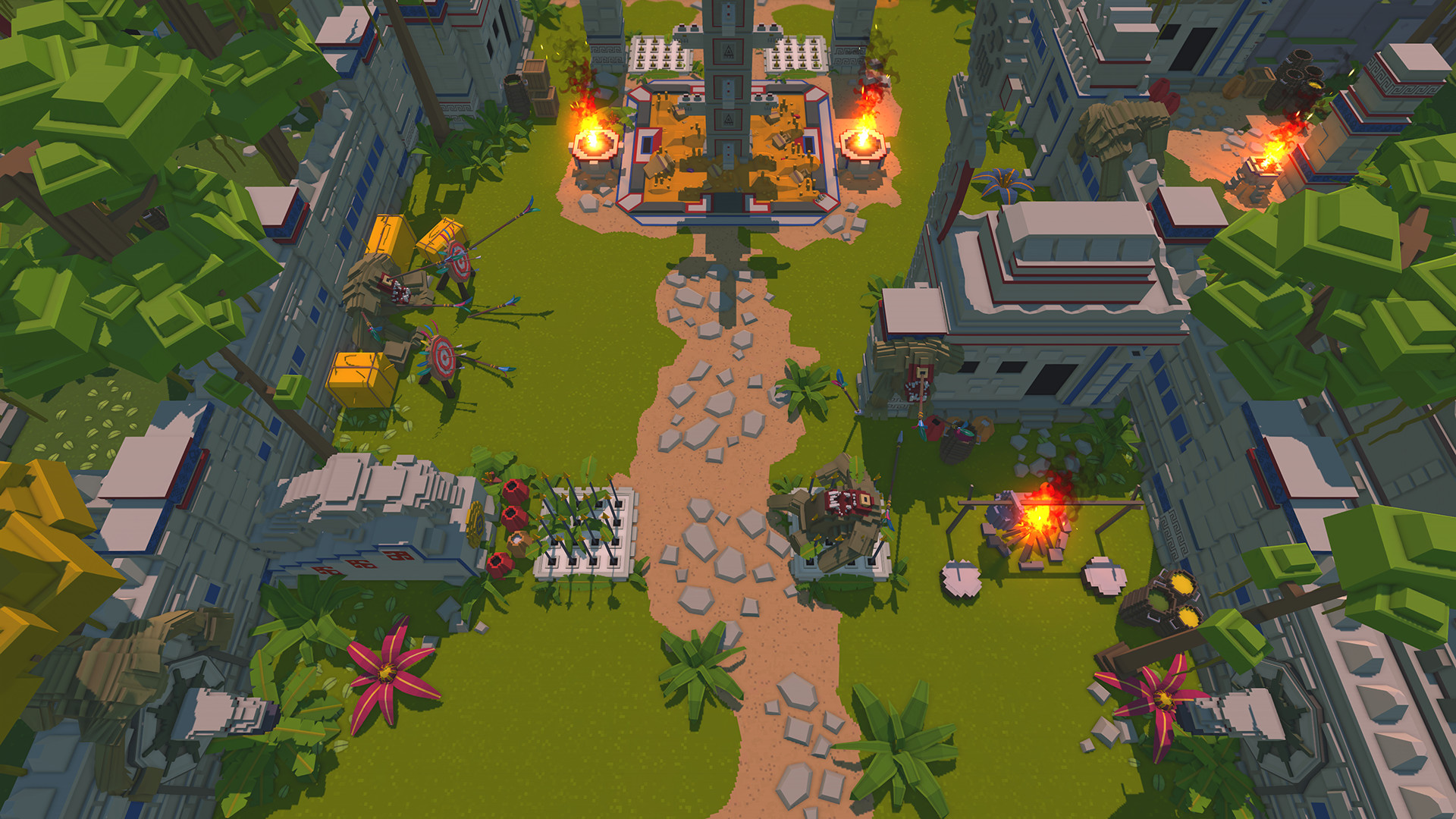 These relics will include things like random acid pits, purple lasers spawning to shoot at you, and missiles flying at you from various directions. Compound this with Hard mode (which unlocks after finishing the first boss) and I Hate Running Backwards can get brutal. Having an acute understanding of the mechanics will be the only way you’ll survive, or you can just piggyback off of a game dev that understands everything.

Yes, this game has co-op play and it can be a riot. I refused to back down, so I kept having Bernard bump the game up to Hard and put on various relics. I wanted to put the game through its paces and see just how insane it could get. Since the controls are relatively simple, the Switch version will have co-op right out of the box without the need for another joystick. That sounds perfect for long flights or even just impromptu sessions with friends.

The relics will be the only real progressive unlock in the game. This isn’t styled after other roguelikes such as Rogue Legacy or Binding of Isaac. Dying restarts you completely and you’ll just need to toughen up and try again. In a fun twist, though, the achievements for the game will unlock a bunch of bonus stuff (such as dying for the first time unlocking Lo Wang), so there will be challenges to go for instead of just besting a high score. 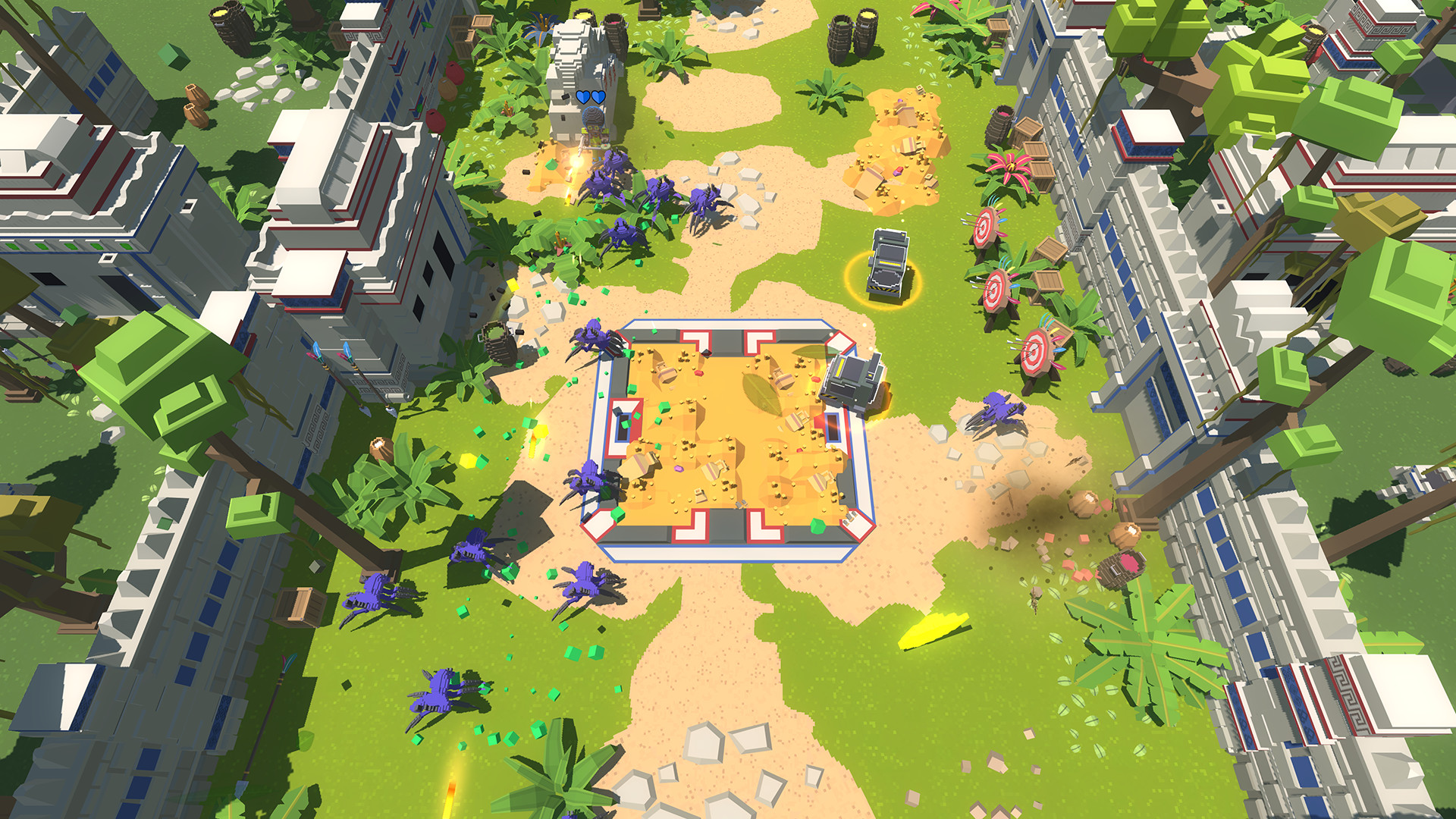 If you want to chase high scores, then the daily challenge option will have you set. Putting out a specific seed for all players, you’ll get one shot each day to put up a high score under specific stipulations. I’ve never been big on those modes, but I know the Spelunky community has been dedicated to that for five years now. I could see people getting sucked into this, especially with all the modifiers available.

My only real concern is the longevity of such a game. It feels very similar to a lot of those Serious Sam indie games that Devolver has published, most of which have been forgotten by a majority of gamers. I’ve liked the mainline Sam titles, but I can’t say I’ve ever had an interest in any of the spin-offs. That being said, those games never included characters from other Devolver titles and having the chance to get Sam Stone and Lo Wang together is a bit too wild to pass on.

If any of what I’ve said has you interested, you won’t have much longer to wait. Binx Interactive is pretty insane, because the game will be launching on PC, Linux, PS4, Xbox One, and Switch this May. Now I can see why the game is so ludicrous, because you’d have to be insane to launch on every major platform as an indie dev at once.