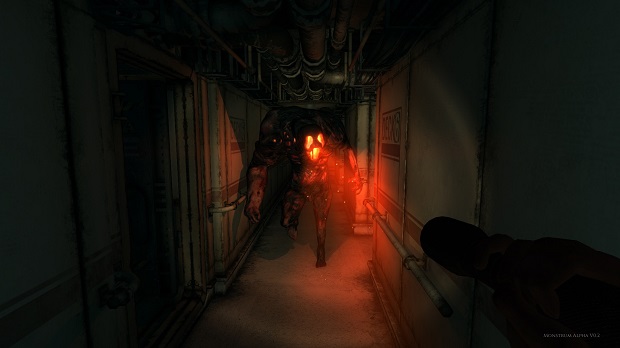 This Oculus Rift title has you being hunted

I talked yesterday about how horror games are difficult to demo at a convention; you need to block out so much noise and activity around you to be really immersed in what you’re playing. Team Junkfish had no such problems as their upcoming title Monsterum uses the Oculus Rift and once you’re wearing that along with some headphones, you can really start to get scared.

Monsterum sees the player stuck on an abandoned container ship, desperately trying to find a way to escape. The problem is, a monster is stalking the player and believe me, it’s a nerve-racking feeling when you first catch a glimpse of one. The ship where this takes place is procedurally generated and the monster itself will be randomly picked from one of three possible variants. Players will be unarmed but able to set traps in the environment to stun or distract the monster. Of course, it’s difficult to look past the influence of Amnesia: The Dark Descent, which seems to be influencing so many horror games recently. Simon and Jamie from Team Junkfish agreed that the idea of horror game where you can’t directly fight back wasn’t original anymore but they plan on adding elements to Monsterum so that it will be more than just running and hiding.

Of course, part of the fun of watching a game like this be shown to the public is the gasps and screams from the player when they see the monster for the first time. (I took some perverse glee in bringing along Australian community member James Camilleri [aka Puppy Licks] to try out Monsterum.) Having the Oculus Rift on really makes a difference to the experience. This was my first time I’d ever used the Rift and it did take some getting used to. I kept moving the right stick on the controller to try and move the camera, forgetting that’s what the headset is for.

Simon confirmed that Monsterum is on track for a January 2015 release and I’m really excited (and slightly scared) to play the full game.