With a name like Hack N Slash, it’s easy to assume exactly what’s in the package and dismiss it. Then people hear it’s from Double Fine and expectations immediately change for the better, as they should. Hack N Slash is more about hacking than anything else. But not physical swinging-of-the-sword hacking, this is computer hacking we’re dealing with here.

Changing a Boolean for a door’s locked status is par for the course in Hack N Slash, and even if you have no idea what a Boolean is, Hack N Slash is easy to enjoy and experiment with.

The beauty of Hack N Slash comes from its freedom. More specifically, the freedom to potentially crash the game. The main character, Alice, has a USB-sword that can jack into things around the environment and change their core coded values. For example, when hacking into a bush, the player can set the status of “on fire” to true, and the “amount of hearts dropped” to 5. This would cause the bush to burst into flames and drop five hearts. Players can also set the hearts dropped to 5,000, which causes the game to likely crash.

My favorite moment of the demo was when I hacked an enemy bird and forced it to attack me faster but for negative damage. This way, I essentially had an ally that would heal me for five hearts every 2 seconds or so. I could have simply set the bird’s aggressive status to “false,” but where’s the fun in that? Seeing different players approach puzzles in different ways was an absolute blast. Some players preferred to push blocks, while others, including myself, much preferred to pull them (or, in the game’s words, set the push distance to a negative number). 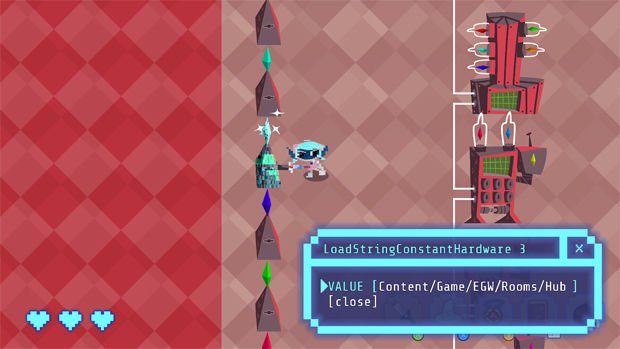 Hack N Slash will be hitting Steam Early Access in two weeks, and will launch with three of its planned four acts. The fourth act will be added in later (for free), and will be designed around player feedback from the first three acts. The game evolves pretty quickly, eventually allowing the player to actually change the core values of the game itself, instead of just entities in the world. Double Fine is even planning for players to be able to edit the actual code of the game and go nuts with it, which would allow the game to truly live up to its name.

How people break the game is going to be the most interesting aspect of Hack N Slash. Double Fine has gotten ahead of the issue, and displays an in-game message about crashing the game, which essentially warns the players to stop doing whatever it is they did. The game also keeps many backup save states in case players hack a situation that leaves the game unwinnable. The fact that these scenarios are even possible are a beautiful thing.