Twenty-twenty was a pretty crap year for myself and, well, basically everyone. I don’t like looking at years — perfectly innocent spans of time — as something that can be containers for misery, but a lot of terrible things happened to the point where I’ll join in and say, yeah, 2020 sucked.

Doom Eternal (and Animal Crossing: New Horizons) came out at the cusp of everything going to crap. We’d just stepped through the threshold of the year and before we could even find the disappointing snack table, here comes Doomguy with his new game.

As if things weren’t already bad, I bought Doom Eternal on Steam and found that my decade-old processor had been deprecated and it wouldn’t even launch. I got a refund and put that money towards the PS4 version. That just led to further disappointment. Certain things were just rubbing me the wrong way; this was not Doom 2016, this didn’t feel like the next evolution of it. I found myself struggling to enjoy it, pushing through it out of the obligation of money spent, and then I dropped it a little past the halfway point.

It’s over a year later and I’ve got a new processor. I impulsively picked Doom Eternal up on Steam for some reason, and immediately jumped back in for some carnage. But this time, I felt something different. 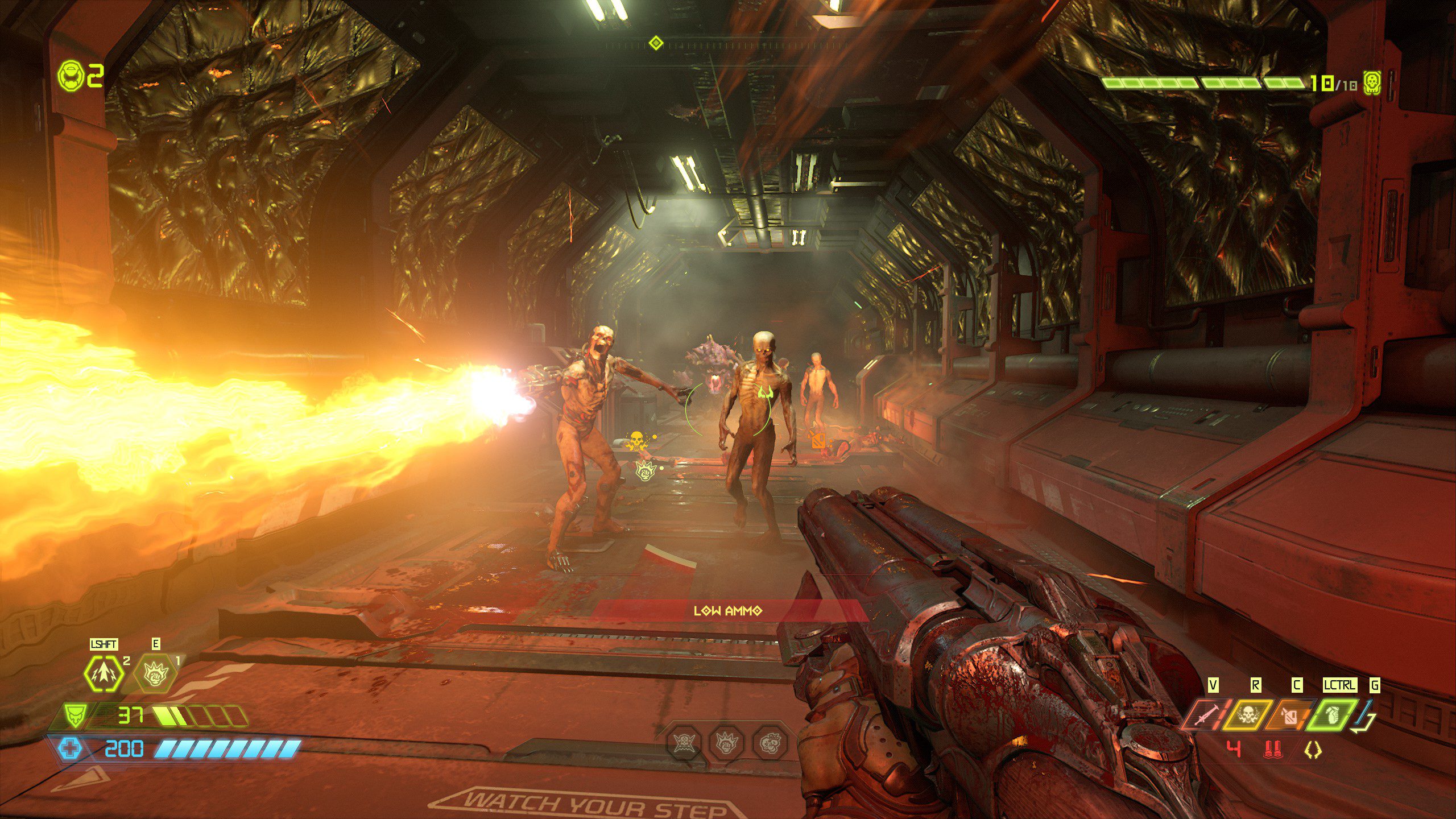 I’ve been a Doom fan since time immemorial. I remember being awestruck by it as I played on my uncle’s computer. A bit later, I played the hell out of the SNES version when my parents finally caved and got it for me. I recall having a High School friend turn his nose up at me when I said I’d rather play Doom than Halo. In college, I carried a copy of ZDoom around on a USB drive (a whopping 1GB of storage, this was 2004) and played it on the school’s computers in my spare time.

Doom 2016 was a dream come true. It washed away my skepticism and presented me something that wasn’t Doom but knew how to stick to the Doom philosophy. I fell in love with the new depiction of Doomguy, the little secrets and throwbacks, and just the game’s general attitude. It felt like a modernization of the old titles, embracing the ridiculousness of it and just trying to entertain.

Imagine what it would have been like if we got what was shown off in the Doom IV prototype instead; just another violent, brown/grey war shooter. Instead we got a fast-paced murder sprint that pushed the series forward and renewed it. 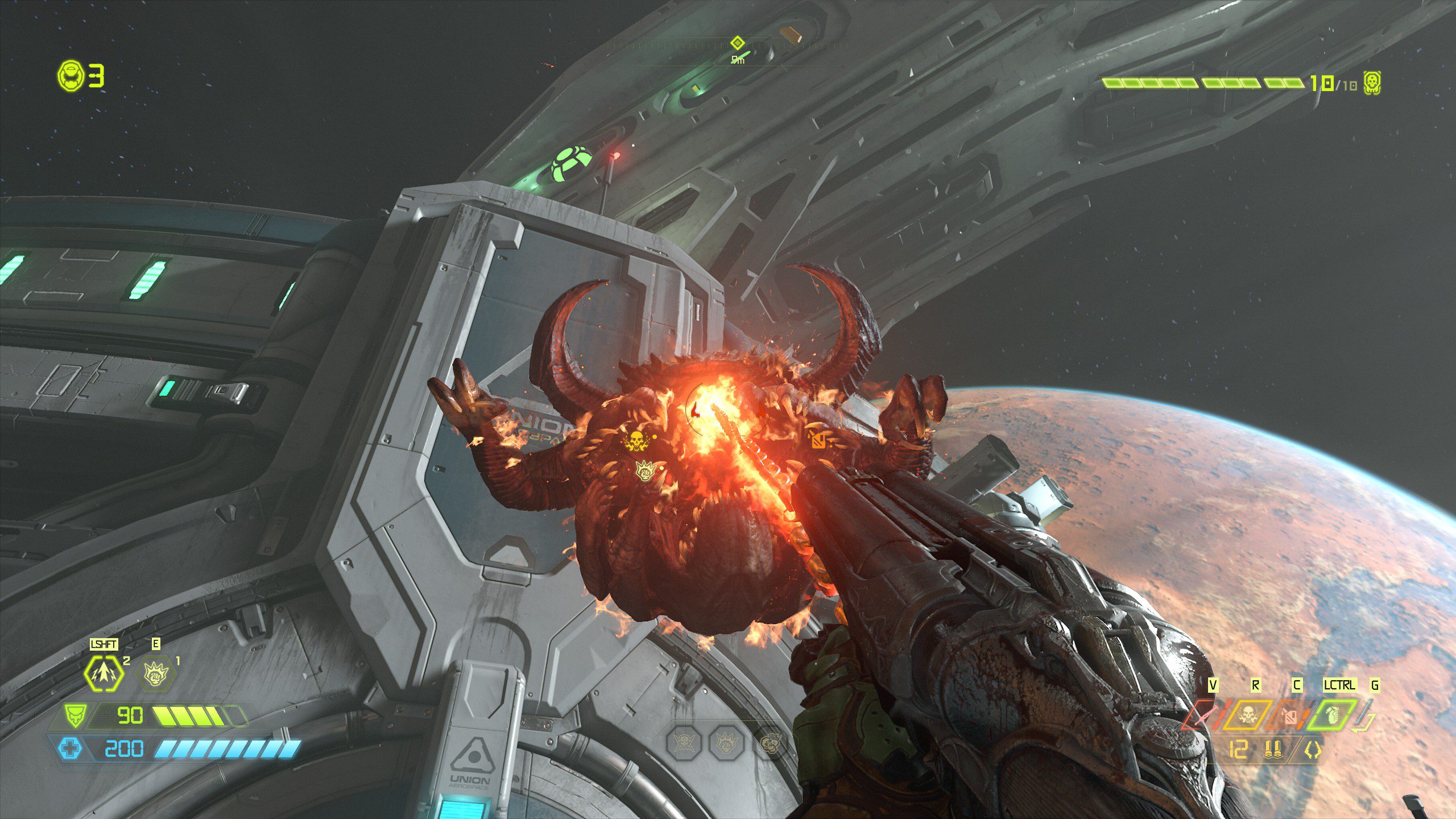 The first thing that struck me about Doom Eternal is how mechanical it felt. To be fair, both games have basically the same formula; corridors full of platforming and fodder demons separating open arenas against larger threats. Both of them took a level-based and largely linear approach with secrets interspersed around.

Something about Doom Eternal just felt like cement. While Doom 2016 had you progress from area to area, Doom Eternal has you teleport to the next level, essentially disconnecting everything. Likewise, it seemed a little less flexible in its placement of combat arenas. You can practically tell when you’re entering a heavy combat arena, since it contains ramps, jump pads, and pick-ups scattered in obvious spots. The demons start queuing up to spawn in, and it just feels a lot less organic.

Likewise, there’s a big tonal difference between the two games. You could hardly call Doom 2016 a horror game, but it did lift heavily from the darkened corridors of Doom 3 and still attempted the odd jump scare. By comparison, Doom Eternal feels very much like a comic book. The environments feel less threatening, and there’s more of a light-hearted feel in general. Some of the monsters seem downright goofy, and the environments are less believable.

Don’t get me wrong, Doom 2016 was a pretty far cry from reality, but it was more, I don’t know, grounded.

Perhaps my pettiest complaint was how they ruined Doomguy’s mystique. He’s still the unstoppable force of rage that he always was, but then in his Doomcave, he has a selection of guitars, toys, and a portrait of him and his bunny. People speak of him in awe, demon’s fear him, women want him (probably); he’s just been further inflated to the point where no imagination is needed to fill in the gaps. 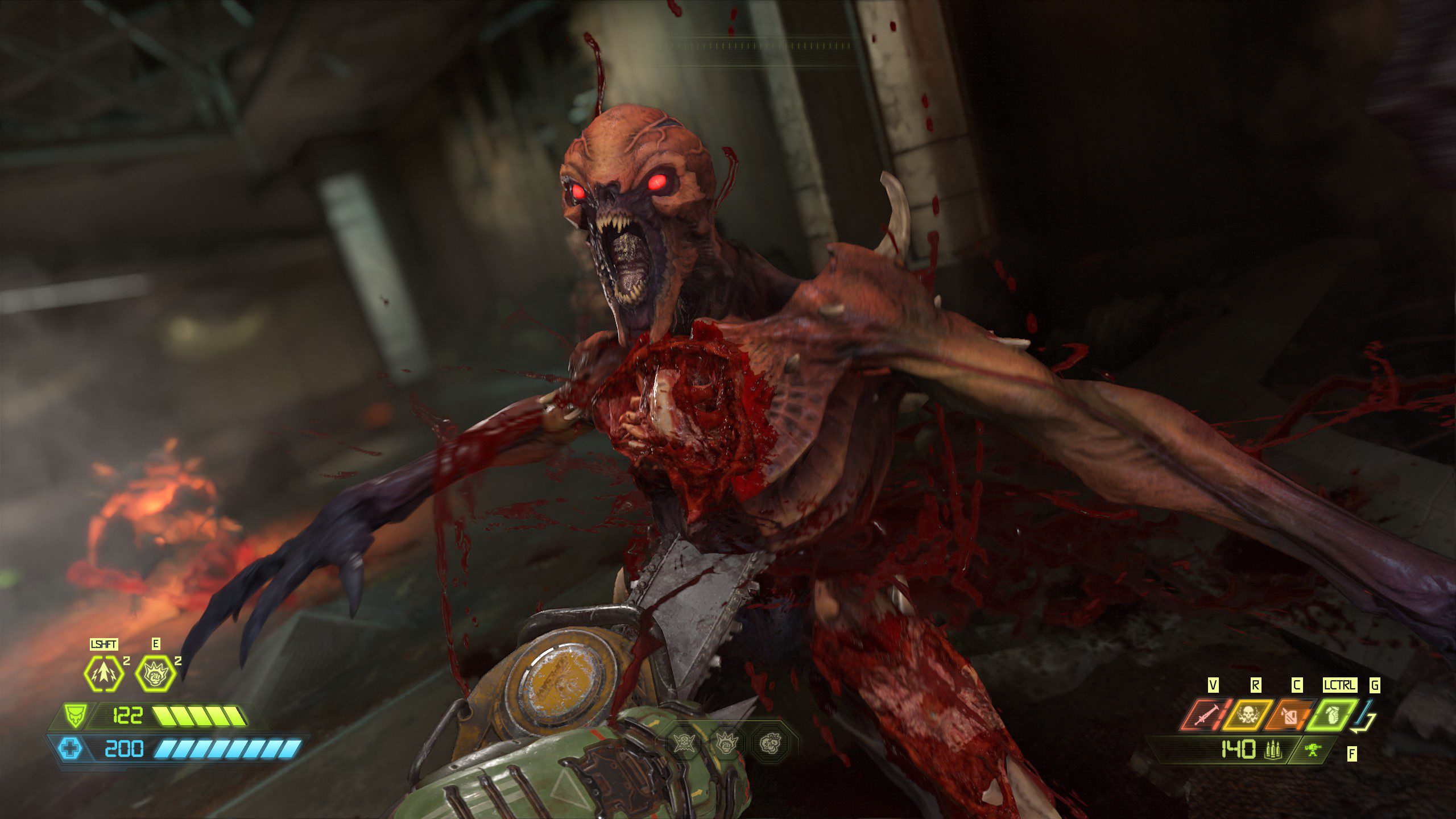 In retrospect, I don’t know why these things bothered me so much that I’d give up on the game and walk away. They didn’t even make an impact on my opinion this time, I was too busy kicking ass.

Suddenly, I was loving Doom Eternal’s enhanced mobility as I sped around the chaotic battlefields, shoving my Super Shotgun down the throats of the various demons. I was Doomguy, I was power incarnate. Rip through this demon with the minigun, run out of ammo and chainsaw that one, realize I’m running low on health, so I flame belch on another and blood punch the ones next to it. Fracture and eviscerate!

Even the platforming felt empowering as Doomguy would stick his big meaty paws in obviously communicated walls, then swing, double-jump and airdash to the next. I began laughing every time someone would tell Doomguy he couldn’t do something, only to have him immediately prove them wrong.

I loved taking down massive demons with instant kills, meat hooking across arenas to blast my shotgun right into the face of a bloated Mancubus. Prioritizing targets on the fly, there’s an Archvile about, it must die! I don’t have my blood punch charged to annihilate that cyber Mancubus, I’ll just dash to the other side of the arena, glory kill some fodder, then come back and wreck him.

There were so many combat options that it was difficult to keep track of them all (I rarely used grenades). I developed strategies for defeating particular crowds and alternate strategies for when I realized one of my weapons was out of ammo. By the end of the game, I was Doom Incarnate! 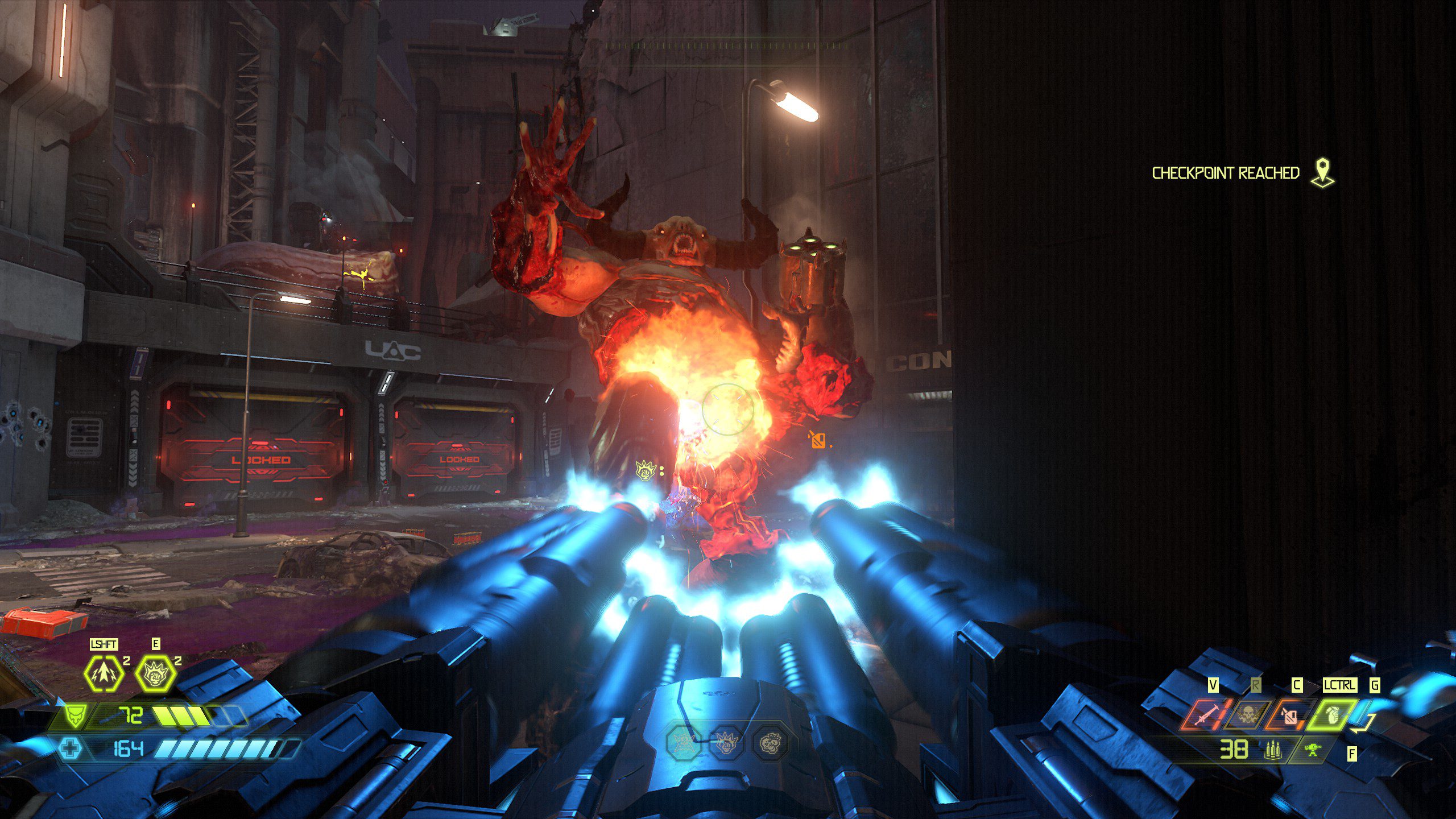 Let’s not kid ourselves: Doom Eternal was received enthusiastically. There were some complaints, and others, like me, didn’t click with it, but to say it was a failure would be inaccurate. Simply, based on my expectations, it wasn’t what I wanted.

Playing it again was an entirely different experience. I was so in love with it, I began thinking Doom 2016 would feel slow and lack impact by comparison. The combat was just so overwhelmingly exciting and satisfying. I still don’t think it’s perfect, make no mistake, but I feel I understand it better. Like Doom 2016, it knows what it is. It embraces its ridiculousness, and just tries to entertain. I don’t know why I took it so seriously before, but I’m glad I gave it a second chance.