Frankly, the word “football” — and we’re talking the rough and tumble American-style here, helmets and all — puts me to sleep. I understand the appeal, but wasn’t raised playing or spectating, so it’s never been able to hold my attention.

As a kid, I turned to videogames instead. So maybe you’d think the combination of “football” and “videogames” might arouse my interest. Not the case — I find the wildly popular digital versions of the game to be just as unappealing. To be clear, I know fans love them, and I admire that year after year developers churn out impressive productions and quality products. It’s just not my “thing.”

So why is it that I spent over an hour with NaturalMotion’s Backbreaker Vengeance for Xbox Live Arcade and didn’t want to stop? 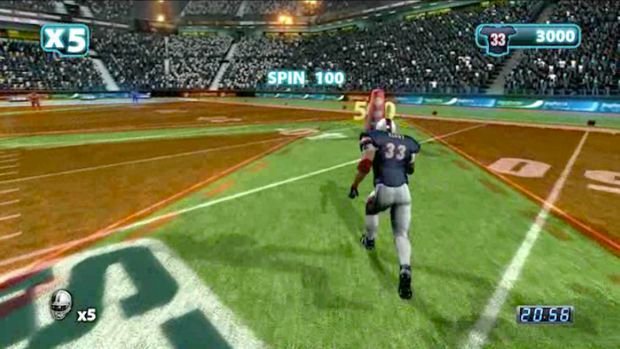 For starters, Backbreaker Vengeance isn’t your typical football game. It’s based in part on NaturalMotion’s Backbreaker title released last year for Xbox 360 and PlayStation 3. Difference here is that while that game was traditional in the sense that you’ve got your plays, your first downs and such, Vengeance approaches it from a different angle — pure action, no fat.

I got some exclusive hand-on with the game’s “Tackle Alley” mode (demoed in the above video) which has a single runner fighting to carry the pigskin across the end zone, a small army of defenders blocking his path. It’s not simply about survival, but about doing it style. You’ll get points for juking or dodging with the right analog stick, barging through those in your path, hopping over hurdles or defenders, and even sliding under players diving to take off your head. Stringing moves together builds up a combo multiplier, the more varied you are, the more points you’ll rack up when you hit that end zone.

Making it to the goal isn’t enough to rack up huge scores. Many of the challenges I faced (which come packaged as “waves,” not unlike Gears of War 2‘s “Horde” mode) had score patches scattered on the field. Hitting them would award me with upwards of 500 points, depending on the placement. Later waves had clearly marked boundaries, and stepping into them would result in immediate disqualification. 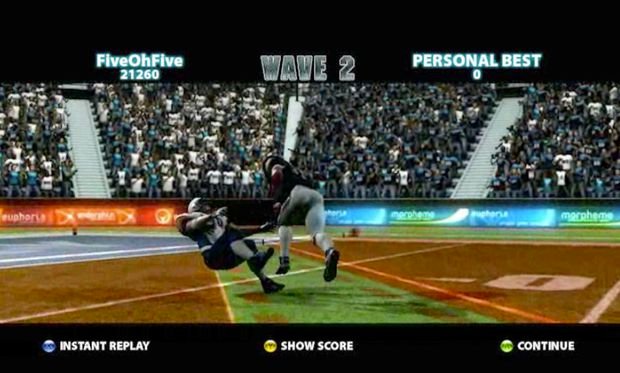 Between defenders, obstacles, score patches, and the delineated out of bounds markers, things started to feel more like an American Gladiators event than traditional football. Sizing up the best route prior to pushing through became key to getting higher and better scores. I even found myself going back to certain challenges in an attempt to eke out more points by finding new paths and varying my moves.

Showboating as you speed towards the end zone can also earn you additional points, but be careful: Vengeance is as much about getting brutally sacked as it is about getting from point A to point B. NaturalMotion’s euphoria animation engine calculates 3D animation and collision on the fly, resulting in some of the most impressively bone-crushing tackles I’ve seen in a videogame. These aren’t canned animations or some sloppy rag-doll collision; every sack had weight and a brutal intensity that had me wincing every time two players plowed into one another. Because of this, successful runs were all the more sweet, knowing that the alternative was some seriously vicious virtual pain.

With the scoring mechanics tied in so well with the fast-paced gameplay, Vengeance feels less like a conventional sports game, and something closer to Tony Hawk Pro Skater meets Gears of War‘s “Horde” mode. I went into the game with little knowledge of football gaming, and quickly found that it didn’t require it. While it has its origins in an established genre, Vengeance seems to be offering a pick-up-and-play experience that even non-sports gamers should be able to easily appreciate.

Backbreaker Vengeance is slated for release on Xbox Live Arcade this summer.