Can you ignore a Zelda release? I can’t. Sure, I’ve joined the “Ugh, another entry with the same formula?” army before, but after four years of speculation, I can’t very well ignore Skyward Sword.

There is something so enjoyable about the Zelda formula and watching it slowly evolve from title to title. It’s not strange to feel nostalgic for a certain Zelda because of its systems, art style, navigation, or particular world and story. Over the years, developers have taken notice of this and applied Nintendo’s magic formula to their own games.

This is a list of the greatest Zelda knock-offs of all time. Whether you want an NES-style Zelda or an epic adventure in HD, many options are available to ease the anticipation for Skyward Sword. Let’s explore beyond Hyrule for a short while longer. 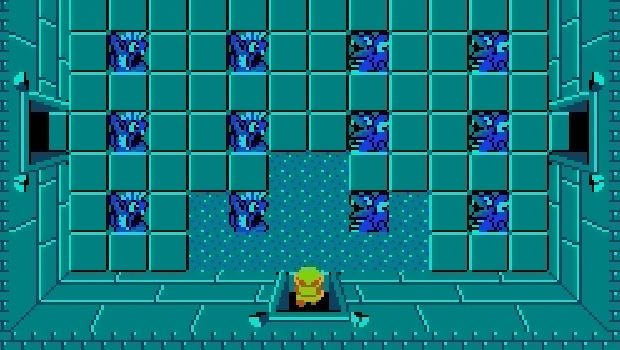 It’s hard these days to play a game involving action of any kind that doesn’t borrow many design elements originally found in The Legend of Zelda. Item collection, unlockable areas, world maps — there are so many ideas that were introduced through this influential game. Unlike its sequels, The Legend of Zelda primarily focused on battles and puzzle-solving within dungeons. Outside of a few hidden items, the overworld existed merely to connect the dungeons together. The games listed below follow the original’s structure and graphical style closely.

Before Batman: Arkham Asylum, we had James Bond 007. It was the first time an established pop culture icon made a jump into games by following the The Legend of Zelda template heavily, and damn if it wasn’t awesome! (Sure, Rambo on the NES copied Zelda II, but the less said about that one the better.) 007′s combat and bosses may be lacking in retrospect, but the game still managed to capture the adventure and romance of playing as Bond while channeling the magic of Zelda through exploration and gaining new gear. It’s hard to return to the Game Boy’s graphics these days, but this gem is worth it. 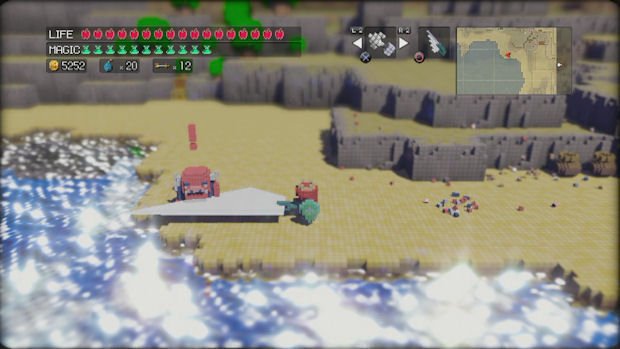 It’s hard to believe this charming, retro Zelda throwback is from the same guys who made Dark Souls. Then you get to the later dungeons and realize the final boss is f*ck-off hard! Even beyond its glorious LEGO-like visuals, 3D Dot Game Heroes is a fantastically designed game full of secrets, challenging dungeons, and tricky boss fights. Perhaps it’s blasphemy to say I prefer it to its source of influence, but I do. There is nothing more satisfying then clearing a room with a giant sword in one sweep, and nothing worse than losing that ability and getting your ass kicked because of it. 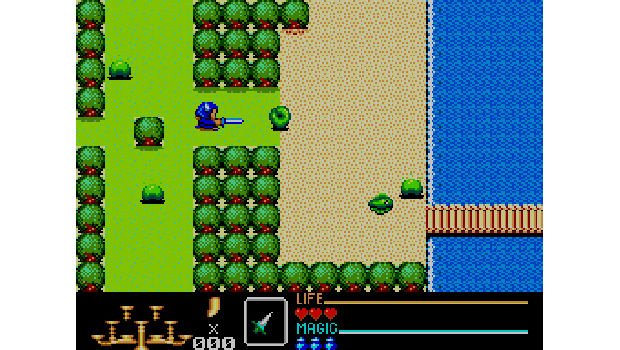 While I’d call the other games that populate this feature “Zelda-esque,” Golden Axe Warrior is a straight-up shameless clone. However, it’s a good one for a system that was in sore need of one. While it’s easy to write off Sega’s attempt at mimicking Nintendo’s winning formula, Golden Axe Warrior managed to appease both Golden Axe and Zelda fans. With superior visuals, audio, and a world populated by villages, Sega fans got the last laugh with this forgotten classic. If you are more of a Zelda II fan (weirdo!), make sure to check out the Game Gear sequel Ax Battler. 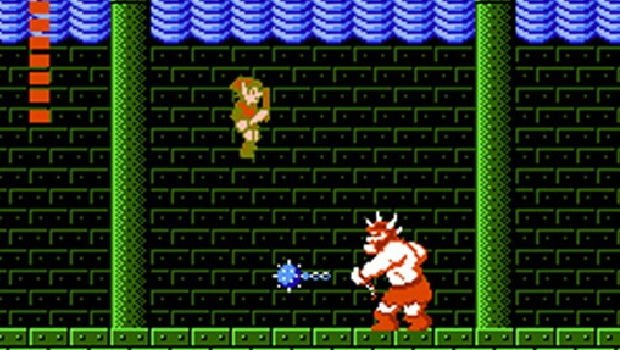 While Zelda II remains a divisive sequel among series fans, there is no arguing that it contains some brilliant ideas (regardless of how well they were executed). Between the addition of experience points, populated towns, and sidescrolling combat, Zelda II presented a unique experience that didn’t rest on the laurels of its predecessor. I personally wouldn’t touch the game with a ten-foot pole, but I’d happily play the great games it inspired. 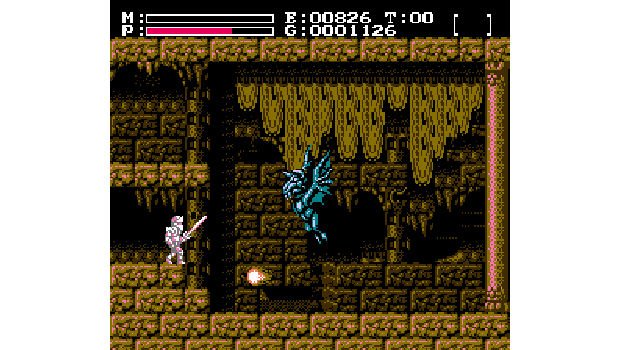 Much like Zelda II, Faxandu is a complete left-turn of a follow-up that leaves most of the hard RPG elements from the Japan-only Xanadu out of the picture. Instead, Faxandu favors side-scrolling action without forgoing item-hoarding and experience-grinding. The result is a much more gothic take on the Zelda II format that is well worth playing for its combat and haunting world. The game has received a cult following over the years, and it’s now available to a much wider audience via Virtual Console. 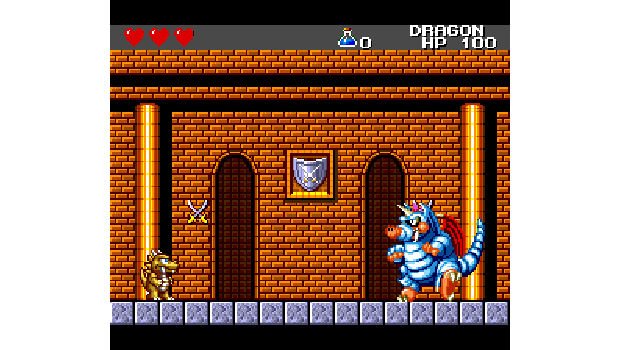 In stark contrast to Faxanadu, Wonder Boy III is a twee, colorful alternative to Zelda II. It lacks an overworld map, but in its place is a large non-linear world full of shops, enemies, and collectible items. Many consider Wonder Boy III an early example of a “Metroidvania,” since you need to acquire specific items to progress through certain areas. However, I liken the game to Demon’s Souls since most of this exploration is optional and mainly there to make battles easier. You can handle levels in order or jump ahead for a weapon that will help you out. This interesting approach, paired with the game’s gorgeous visuals, help it stand out as the best in its series (something that will always be contended). You can pick up both the original and the equally good TurboGrafx-16 port on Virtual Console. 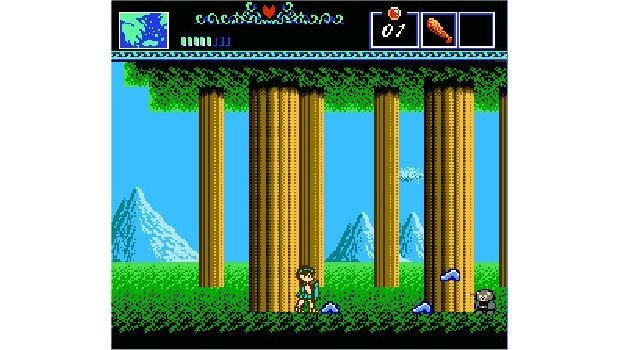 No other game copied the Zelda II formula as faithfully as The Battle of Olympus (also known as “The Adventure of Link in Greece”). Yet there is a strong argument to be made that this obscure, historically inaccurate title is superior to Link’s second outing. With improved combat and a compelling story — fans of mythology will especially appreciate this one — it’s easy to forgive Olympus‘ grueling difficulty and tiresome leveling. Unfortunately, you’ll need to hit up eBay for a $5-10 copy of this lost odyssey. 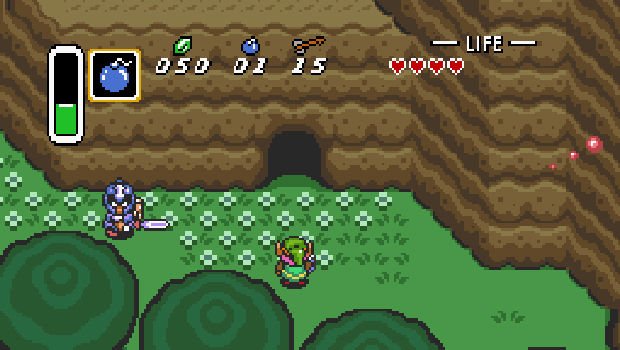 Link’s Super Nintendo sequel built upon the original while introducing a memorable plot twist, iconic items (the hookshot!), and a world full of details and secrets. It’s the first Zelda game that you could get lost in, and like many others, I did just that every day after school in second grade. It’s difficult to replicate the perfection of this game, but many attempted and a few came surprisingly close. 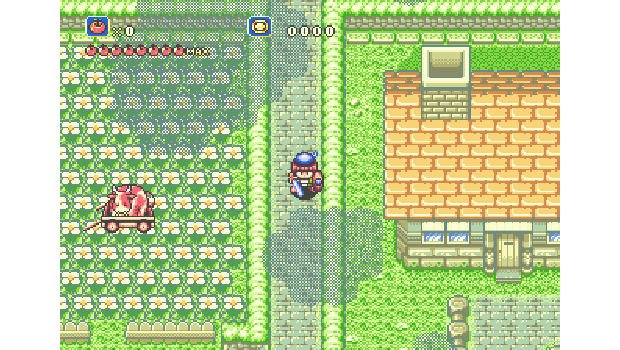 While Crusader of Centy is a much briefer adventure than A Link to the Past, it has its share of plot twists, secrets (Sonic the Hedgehog has a cameo), and mini-games (such as a top-down kart racer). It’s kind of amazing that developer Nextech was able to get such colorful, detailed graphics that mimic A Link to the Past quite well, despite the console’s limited hardware. Centy‘s unique combat system is entirely its own creation. Throughout the game, you collect animals that modulate your sword attacks and give you special abilities, and you can even combine them for different attacks. Centy lacks the epic scope of its SNES competitor, but it gave Genesis owners a little taste of Nintendo’s classic without feeling like a soulless clone. You’ll have to throw down ~$65 on eBay to play this one, though. 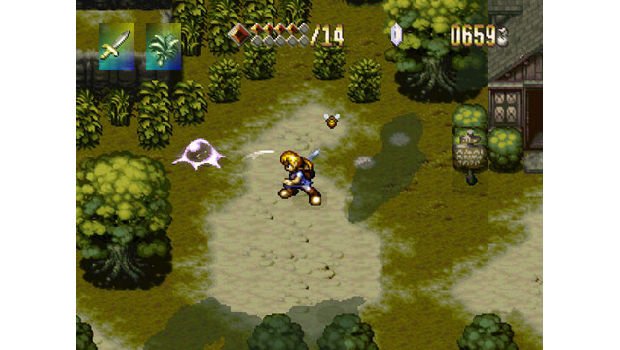 From its flashy anime cutscenes to its Chrono Trigger-esque visuals, Alundra is everything an old-school Zelda fan wanted in 1998. The story was more mature, the puzzles were more difficult, and the game oozed atmosphere. It’s a much different beast than A Link to the Past due to its focus on storytelling, platforming, and puzzles. As a result, the game has an intense fanbase that claims it to be superior to any of Link’s 2D adventures. Just don’t mention its awful sequel; it’s a real sore spot for them. Head to PlayStation Network if you want to see whether the hype is deserved. 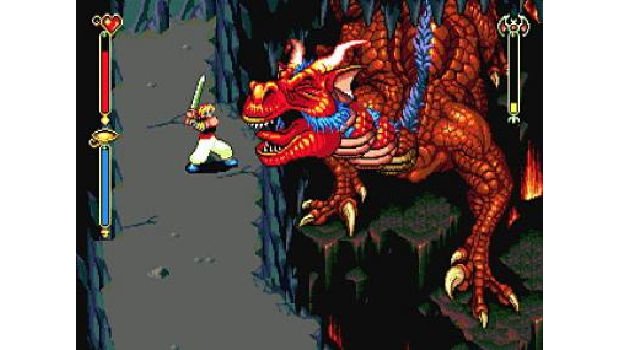 With its comic book visuals, Middle Eastern-inspired setting, and beat-’em-up combat, there is a lot to like about Beyond Oasis. Whereas Crusader of Centy gave Genesis owners a strong Zelda-inspired adventure, Beyond Oasis feels much more original and innovative. I personally enjoy Oasis‘ combat a lot more than A Link to the Past‘s and thought the boss fights were just as memorable, if not as clever. The game also includes a leveling mechanic that should satisfy Secret of Mana fans. It lacks the details and charm of A Link to the Past, but this is a great contemporary for the Genesis. Now Nintendo fanboys can play the game on Virtual Console or Sonic’s Ultimate Genesis Collection for PS3/Xbox 360. 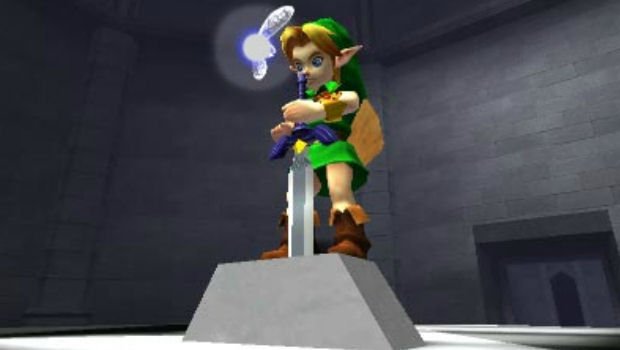 With the jump into 3D, Zelda increased its ambitions and scope. Now Zelda titles have multiple city hubs, tons of mini-games, and lock-on targeting. Not much has changed since then — a wolf, a boat, whatever — but the format for a modern Zelda is just as compelling as the structure that accompanied the 2D entries. If you are looking for a change in setting or some interesting twists on the format, look to these titles below. 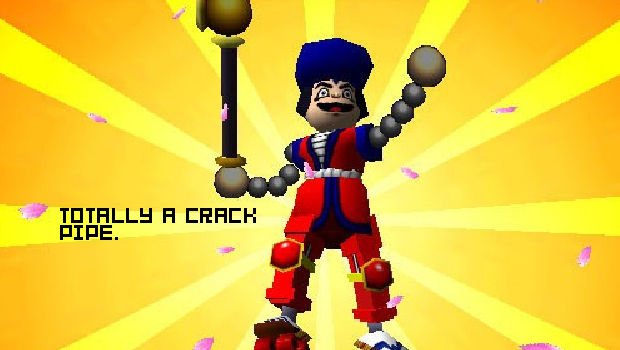 Mystical Ninja gave N64 owners something to make the long wait for Ocarina of Time easier — hell, Goemon even has a hookshot! Released six months before Link’s foray into 3D, Mystical Ninja gave us a taste for 3D action-adventure through one of Konami’s best series … that they often deprive Westerners of. Between Goemon’s golden crack pipe weapon and pointless inchworm crawl ability, he’s a lovable character despite not having much sway with American gamers. The game’s camera was frustrating, but the world was, nevertheless, a joy to explore due to its unique take on Japanese mythology (sprinkled with elements of sci-fi). Nothing about the game was refined, but it had spunk and many memorable surprises (mech battles!). If you don’t fall in love with its terrible theme song, you better move on. This is another game in sore need of a Virtual Console release. 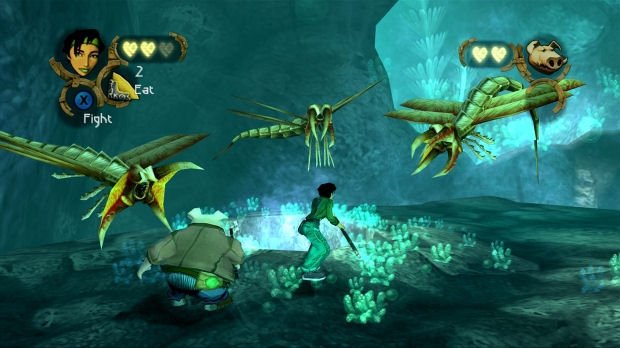 For those looking for a more cinematic and mature Wind Waker, Beyond Good & Evil should do the trick. In contrast to Wind Waker‘s intimidatingly large world and complex dungeons, Beyond Good & Evil streamlined the 3D Zelda approach into a memorable plot full of conspiracy theories, likable characters, and stunning set pieces. As evidenced by its recent HD re-release, the game holds up surprisingly well due to its focused pacing and attention to detail. Every time you revisit the game’s main city hub, there are subtle changes that reflect your accomplishments within the game’s varied “dungeons.” The focus on stealth and sea travel makes this especially worth seeking for Wind Waker fanatics. This is the perfect game to pick-up on PSN or XBLA to prepare you for Skyward Sword. 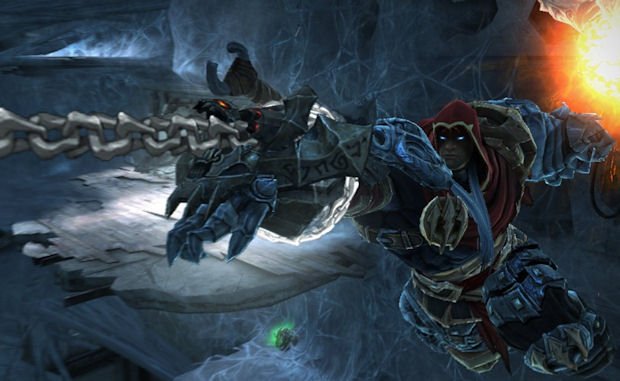 It’s ironic that Darksiders was written-off as being a shallow God of War clone before its release, as it was labelled a shallow Zelda clone afterward. If you hear someone say either, it’s because they haven’t actually played the game. While I find the game’s art direction appalling, the combat, puzzles, and world felt like an intelligent update to the 3D Zelda format. Instead of a circle slash, you have a relatively deep combo system. Instead of pushing blocks, you solve puzzles with a freakin’ portal gun! How cool is that? The game lacks the free-roaming aspect of a Zelda title, but it keeps the same dungeon and item-upgrade structure that gives comfort to many of us. Even Jim Sterling loved it, and as we all know, he doesn’t enjoy videogames at all!

How do you guys feel about the term “Zelda clone”?

Should we accept these games as merely entries in a genre and ignore their Zelda influence?

What’s your favorite “not Zelda but still a lot like Zelda” game?