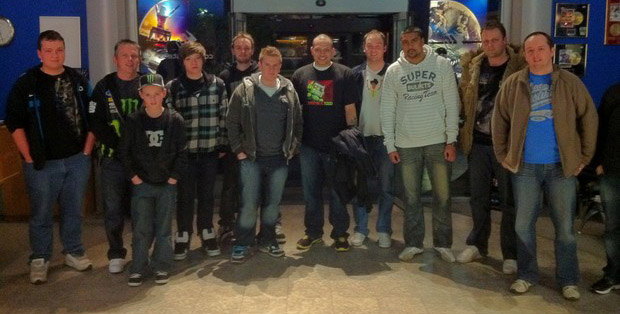 [Recently, UK community member Sexualchocolate got a chance to check out DiRT 3 over at the Codemasters headquarters. Read below for his experience touring the studio and getting a look at the game! — JRo]

One fine day in the world of Destructoid, the lovely Hollie Bennett (read: greatest community manager EVAR) send a DM that would create an opportunity never before seen in the life of Sexualchocolate.

Codemasters was running a play-test day for their latest game, DiRT 3, and Hollie, being awesome, remembered that I mentioned once living near the Codemasters compound and offered to arrange an invite.

A day booked off of work and a couple of emails later and I was set and sorted – the day couldn’t come soon enough.

Now, I’m not the biggest Rally game fan. In fact, the only bit of game-racing I ever really do is a little Gran Turismo here and there. I had played a couple of the old Colin McRae rally games, but other than a demo, hadn’t actually played a DiRT game. I was mostly looking forward to checking out the Codemasters compound (have driven past the gate since I was a little kid and always wondered what was beyond) and hopefully meeting some other Dtoiders in real life!

When the day finally came, I arrived at Codemasters, gave my name at the gate and was sent to the reception where I found Ben (sporting a sexy white pair of Astro A30s complete with DiRT 3 tags!) and Ian, the community managers, and perhaps 10-15 other gamers. After an introduction and a little chat from Paul Coleman (Senior Designer) and signing of NDAs, we got to the tour of the Studio. Yay!

I was totally blown away by the sheer size of the Codemasters compound, hell even just the main studio building! It’s like a labyrinth, with all the walls covered with big prints from Grid, Operation Flashpoint, and all the other varied games made there. We were led through room after room, each full — and I mean FULL — of PS3s, 360s, and triple screen monitors, and Paul would explain what each group of people were doing. Environment artists here, the vehicle graphics team there, the track layouts, the vehicle handling, and so forth. I was seriously impressed with just how many people work on a game like DiRT 3. I don’t know what I was expecting, but I was totally blown away.

Another thing that struck me was that these were just normal people, at work, doing their job. (I did notice how they were mostly all young and trendy people with the odd “old school nerd” thrown in for good measure.) it easily slipped your mind that these people were actually creating that which we hold so dear and in such high regard – video games!

As we were led through their workspace it was just like meeting a group of strangers in any other workplace, they looked at us, said hello, and went straight back to their complex-looking track design or their graphical tweaking. I was already jealous, as it made my job of sitting at a PC writing letters and emails seem so boring.

After a thorough and informative tour we were taken to a big room, full of DiRT 3 promotional artwork and banners etc, with 360 test kits (like a normal 360 with a big white block on the top) hooked up to TVs. Unfortunately, I didn’t notice what looked like a 32” at the back, so some other guy jumped on that one. I had to grab one of the little ones.

This was it, DiRT 3 was running on the systems already. Well, not quite, as the dev team were very eager to point out — this wasn’t actually DiRT 3, but a test build. The devs described it as being “in a state where normally no-one but us would see it.” I felt so privileged! The way we were treated as guests and getting our hands on far from finished games made it real easy to forget that WE were doing them the favour!

Then everything went quiet, except for the sound of 15 or so rally cars, as the title’s virtual host, Ken Block would put it “hooning” around tracks. It was glorious. Only after a good hour or two of solid racing (and the racing, even at this early stage was rock solid!) did I, and some others, notice the big table of snacks, canned drinks, Doritos etc. So soon enough it was a room of nerds, staring hard at their screens firmly gripping their sweaty controllers with Dorito-stained hands and game faces firmly on, only loosening their grip to chug fizzy pop. It. Was. Awesome.

I’m kinda glad that they didn’t want us wandering about on our own, and that either Ben or Ian had to escort us outside to smoke, as it gave me a chance to have a good chat with them one to one. It must have been a pain in the arse though, being made to come sit outside in the cold while we sucked on a cancer stick. But the guys were all totally helpful and made out like it wasn’t a problem.

You may notice I’m not saying a whole lot about the actual game it self — the Non Disclosure Agreements we signed prevent me from really talking about it. All I can really say is that the game is sweet. Pretty as hell too, even in its “far from finished” state, I would actually say, from the cockpit view, the graphics give Gran Turismo 5 a run for its money.

It’s got a whole lot of normal, stage based Rally runs, with some really nice authentic touches, alongside a whole raft of races, time trials, special stages (think Top Gear style challenges) and of course, the Gymkhana. I must admit, before arriving at Codiemasters i had never heard of Gymkhana, but it turns out it’s seriously fun! You may have seen a trailer for DiRT 3 involving Ken Block sliding a Ford Focus under some lorry trailers and doing doughnuts around a digger and such — that’s gymkhana, and it’s hella fun to play! It’s like you’re given a playground, a car, and told to just have fun and see what cool stuff you can find!

This is a feeling that totally extends well into the multiplayer, which is (at least in this build) packed with game types and options. Sure you can set up a basic rally with you and your mates, but you can also hit up some really interesting competitive multiplayer modes, the kind of stuff you would normally be doing in an FPS game … just in a rally car instead! There is plenty of chasing, crashing, hiding, etc. Hell, it makes you feel like you’re in one of those funky car adverts where the cars are playing hide and seek or something! I loved it. There were a couple of modes which were better than others, but the devs were keen to stress that these may or may not end up in the finished product and that changes were sure to be made to how each game type works.

During our short lunch break (read: still playing but eating killer sammiches that Codemasters provided at the same time) a dude approached me with that “who are you” look in his eye — he had noticed my Dtoid Tshirt (ordered specifically to wear for this event). He turned out to be fellow Dtoider Max — nice guy! Once I told him my Dtoid name he shook my hand and joked about me playing on an Xbox (got to love my PS3 fanboy reputation).

(Max is in the green – I hope you don’t mind me putting your pic up here dude!)

After a whole day of playing DiRT 3 and talking to Mike Chapman and the guys about our impressions and things we liked and didn’t like about the build (everyone was all over everything we said – I totally felt like all of our input was like gold to them. It mkese you feel real important!) they started taking people to “The D-Box.” Now, the D-Box isn’t some kind of torture device or a BDSM room or anything, it’s a race seat simulator, with 4 actuators which is, well, FUCKING AWESOME! I think the main response to the D-Box was, “I want one, where can I get one, how much does one cost?”

We were set with a nice sunny track , maybe in Kenya, and tasked to set lap times in the D-Box.

Wow! The thing is amazing. They had it hooked up to a 3 screen display which gave a seriously intense sense of speed, combined with the Rally seat throwing you around as you hit the throttle pedal or clipped a rock, it was just fantastic.

I managed to set a 01:52 which I was quite pleased with, but on the board next to the D-box they had our lap times next to the staff’s. Safe to say, the staff’s laptimes put ours to shame, but I’m fairly sure they had a “bit” more practice than us!

Being one of the last on the D-Box meant I missed a bit of the focus group discussions, but as it turns out by the time I got into the discussion everything I wanted to say had been said already. Again I was totally blown away by how Paul Coleman and the other devs had such open ears — everything from our suggestions on how you pick your cars to the smallest details about specific tracks were noted and you really got the impression they were ready to run off and fix these bits because of what WE said.

Once all that needed to be said had been said, we headed to the lobby for one last group photo, said our farewells to Ben and the guys, and headed back to real life. I felt kinda bad for the guys who had driven there the night before for 5+ hours and stopped in a hotel, or those who had gotten up at some ungodly hour in the morning to drive hundreds of miles to get there, I live about eight miles away, so I jumped in the car and, driving a lot like I was still playing DiRT 3, got home in less than ten minutes.

I can confidently say that I’m 100% sold on DiRT 3, even as someone who doesn’t often play racing games, it will be in my collection on launch day and I’ll keep it too, just to tell my son and anyone else who will listen, that “I was there when they made this and our suggestions shaped the final product.”

All there is left to do is to hope a similar opportunity arises again, and if any of you get the chance to do anything like this I highly recommend you do everything in your power to make sure you can go. Even if this had required an overnight drive, it would have been totally worth it.

Big thanks to Ben and Ian and all the Codemasters staff who made our day fantastic.

(There was no photography, obviously, so thanks to Ben Bateman for providing the pictures.)