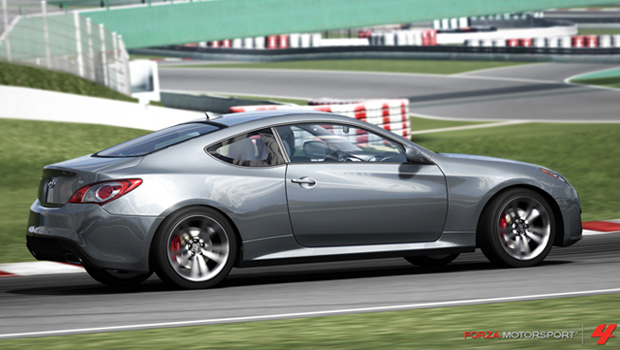 For all you Forza 4 fans that have been waiting for some more sweet rides to add to your collection, Hyundai has got your fix. The Hyundai Velostar Booster Pack has just dropped on Xbox Live and brings players two new cars for free: the 2013 Hyundai Velostar Turbo and the 2011 Rhy Millen Racing Hyundai Velostar.

The 2013 Hyundai Velostar Turbo, unveiled at the 2012 Detroit Auto Show, has a unique 3-door asymmetrical design and a tubro-charged 201 horses under the hood. Gear-heads will also be able to take a closer look at the Velostar Turbo in Autovista, allowing them to drool over every finely crafted curve and part. The 2011 Rhys Millen Racing Hyundai Velostar is an all-wheel drive, 2800 pound monster that can tackle any course with it’s 500 horsepower engine.

On top of this free DLC pack, if you happened to have downloaded the Hyundai registration pic on Xbox Live during the past two weeks and live in the United States, then you can enter the Hyundai Velostar: Forza Motosport 4 Time Trials. The event starts today and will go on over the next two months, giving players the chance to win a 2012 Hyundai Veloster Turbo.

The first part of the competition consists of players completing a time trial on specific track with any Hyundai car of their choosing. The top 1000 players will then move on to a three-week Rivals Mode tournament to find the best Forza 4 Hyundai driver in the United States.

I would really like to see Microsoft Studios sponsor a large international tournament, where the best Forza 4 players from around the world could really show off their skills. These kinds of tournaments have been going on for a really long time in the fighting game and first-person shooter communities, so why shouldn’t the racing game community join in on the action?