Like Rob Thomas and Santana, it is so smooth

It’s been more than two years since the pixelated masterpiece Hyper Light Drifter first graced PC. From developer Heart Machine, the passion project was long in the making and upon release it did not disappoint. Critics loved it, fans adored it and everyone was clamoring to get it every device they could. It was quickly ported to PlayStation 4 and Xbox One with Wii U and Vita version scheduled for sometime after.

Unfortunately, those versions were canceled in Fall of 2016. Because the game was developed using GameMaker, it couldn’t port natively to either system. Vita fans were out of luck, but any Wii U owners who migrated to Switch were thrown a bone earlier this year when Heart Machine and Abylight Studios announced they were porting the game to the system. Thanks to recent moves by YoYo Games to get GameMaker working on Switch, any Nintendo fans who missed out on this indie classic will get a second chance later this summer when it launches in the eShop.

Earlier this week, I got a chance to try out the game for myself. In a small office in San Francisco, I was joined by Eva Gaspar and Miguel Corchero of Abylight Studios to talk about the process of not only bringing Hyper Light Drifter to Switch, but making it the definitive version of the game.

Right away, the smoothness of the game draws me in. It’s fucking gorgeous on the Switch screen. As I start playing Gaspar informs me the port will run at 60 frames per second in both docked and handheld mode and will include Switch exclusive features. Most of what is new remains a mystery. There will be new areas and weapons, but the only Nintendo-exclusive inclusion detailed during my session with the game is the new dual-sword weapon.

Inspired by a scrapped idea from the original game’s development, the dual-sword are used for both close and distant combat. I can quickly slash my enemies as I roll dodge their attacks, or I can throw the sword and have it boomerang back to me. Throwing the sword costs ammunition like the standard gun in the game, but using the technique in tandem with the slash-and-dash attacks I utilize to survive this often crushing adventure opens the combat up for some pretty creative bouts. Testing out the new sword in the arena has me approaching combat in ways I never did before.

While the other previous versions of the game were solely the work of Heart Machine, the Switch port is largely being handled by Abylight Studio. The company has a history of publishing games on Nintendo platforms that have been challenging for other studios to accomplish. If you’ve played Cursed Castilla EX on the 3DS or the chipper Momonga Pinball Adventure on Wii U, this is the studio that made those games happen. Getting those games working on their respective consoles took time and effort to accomplish, but getting Hyper Light Drifter running as smooth as it runs on Switch — and it is flawless from what I can see — has been a beast all its own.

“It wasn’t easy to achieve that,” Corchero tells me after I die for the sixth time in 10 minutes “because if you’re comparing this with platforms with more specs, this version required more hard work to achieve that performance.”

“We have a lot of support from Yo-Yo on this,” Gaspar adds “but it takes a lot of effort on our part to get to that result. But it’s been worth it. Everyone involved with this project has had the goal that the game should run as you see it right now.”

As of right now, it looks like Hyper Light Drifter will be the first GameMaker title to hit Nintendo Switch since it was announced the software would be supporting the platform as an export option. Nidhogg 2 is also on its way as is Undertale. Those are launching later in the year or sometime after, making Drifter the standard bearer for GameMaker titles on Switch. By the time it does release, Gaspar says the staff of roughly seven will have spent six months on the port. Along the way, Nintendo of Europe has been there keeping tabs on development. 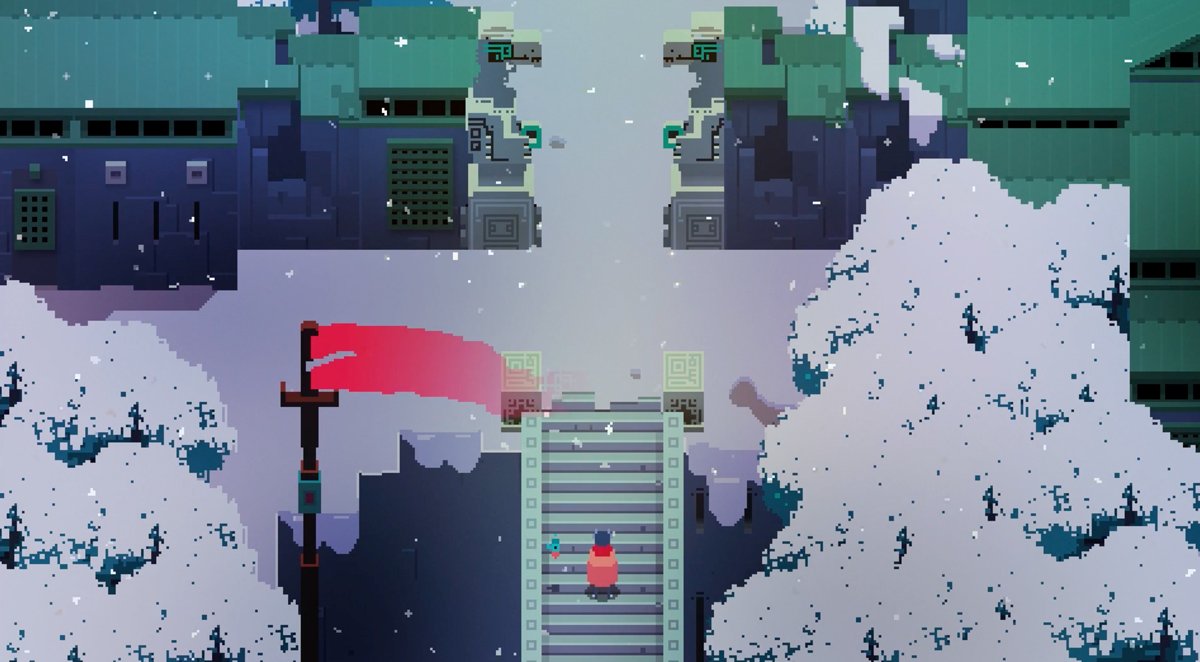 During our interview, they both constantly note the Switch port is going to be the best version of the game we can experience. Part of that is because of the platform its on and all the possibilities that come with it. Local co-op will be available with each player using a single Joy-Con and achievements from the previous versions of Drifter will be carried over in the port. There’s also all that new Nintendo content. I push Gaspar and Corchero for more information on it, but they remain tightlipped.

“This new content will have new areas, new weapons, and one other thing–,” Corchero starts to tell me before he’s cut off by Gaspar. “Let’s just say there are some other secrets that players will be able to discover. To talk about it now might ruin the surprise.”

“Heart Machine is very involved with the whole process,” Gaspar adds, a chuckle in her voice. “All of this exclusive content is original. We are in communication with Alex Preston and his team and everything we’re doing has his approval. He’s very strict and rigorous on how the game feels and what makes sense and what does not make sense. So the new content, when it comes out, will make it Hyper Light Drifter, the definitive game.”

One piece of new content that won’t be coming is a Drifter amiibo. I ask, because earlier in the day it’s confirmed Capcom will be producing a new Mega Man figure for Mega Man 11. Dark Souls is getting its own amiibo and Shovel Knight still has its three-pack on the way. While Abylight Studios would love to have it’s very own amiibo, it knows the approval process is quite extensive and, because it’s such a small team, it’d rather focus on just getting the game out.

I wrap up my session with the game as Corchero tosses out the cliche buzzwords “it’s like Zelda meets Dark Souls.” Forty minutes isn’t nearly long enough to fully appreciate the brilliance of this title, especially when you consider half of my time is spent dicking around in the arenas with the new dual-sword. But this is Hyper Light Drifter. I know this game is good, and from my experience with it on Switch, I can safely say any disappointed Wii U owners who waited it out are in for a treat. If the rest of it plays as well as my demonstration, it’ll no doubt set the stage for an absolute flood of fan-favorite GameMaker titles appearing on the platform.

Hyper Light Drifter is available now for PC, Mac, Linux, PlayStation 4 and Xbox One, and will release on Switch eShop sometime this summer.