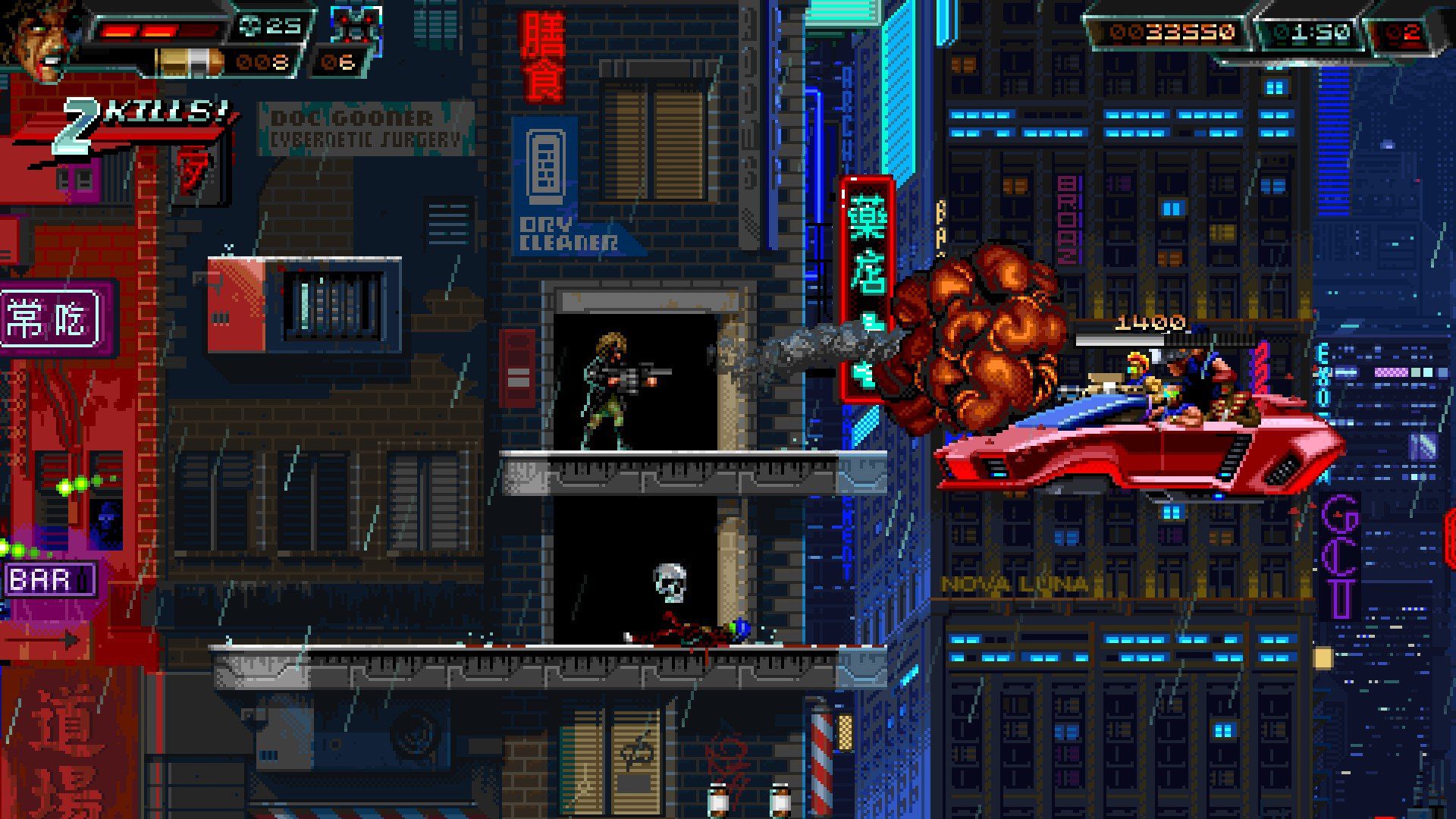 There’s no denying 2020 was an explosive year for video games. But among the mega-bucks, mega-marketed, mega-sellers of the industry, smaller titles were still keeping it real, making names for themselves off of the back of hard effort, great design, hard effort, and solid gameplay.

In this regard, Coffee Stain Publishing’s Huntdown completely won me over last spring, going on to become one of my most played games of the year. Developed in Unity by tiny Swedish outfit Easy Trigger Games, Huntdown overcame its budgetary shortcomings by accentuating its positives: awesome pixel graphics, a hard-hitting soundtrack, superb sound design, and raw, compelling, shamelessly violent gameplay. Huntdown is a dirty, dirty gem.

This week sees the challenging cyberpunk shmup finally make the leap from Epic Games Store to Steam. The Steam port is coming fully loaded for bear, featuring not only a full port of the original game, but also online co-op via Steam Remote Play, and an all-new “Arcade Mode”. Steam players will receive this update first as a limited-time exclusive — somewhat compensating users’ patience — before arriving on other platforms in the coming weeks.

I spent a few hours this past weekend hitting up Arcade Mode, which is designed with the veteran Huntdown sleazoid in mind. Standing apart from the main campaign, Arcade Mode is a full-on score attack/time attack endeavor, tasking our trio of gun-toting bounty hunters with clearing out each of the campaign’s four districts in one run. While the layout of each grim ‘n’ grimy district remains the same, enemy and weapon placement has been entirely reshuffled, with the player encouraged to move masterfully and economically from murder to murder, weapon to weapon, and boss to boss, becoming the living embodiment of a Cannon movie.

Brand new point pickups and bonus multipliers are awarded for all manner of stylish combos. These include the swift-switching of Huntdown‘s wardrobe of weaponry, instigating melee mayhem, tossing fire and explosives into the carnage, and keeping your mounting killstreak alive and kicking… or not, as the case may be. Arcade Mode is exhilarating and hard-as-nails, with a ticking clock pushing you ever forward into huge hordes of Bad Dudes. Additionally, players are afforded less health than the campaign’s standard mode, while score penalties are applied for every lead-assisted lie-down. So think fast, move swiftly, aim well, and put your man down… he’d do the same to you.

Huntdown‘s main campaign is relatively short — although the difficulty settings and few hidden secrets offer solid replay value — but the new Arcade Mode supplies Easy Trigger’s title with some real longevity. Thanks to the new online leaderboards, Huntdown is now in a position to become a great competitive game, which will hopefully see it pull in new fans, build a community, and make a slick segue into the mainstream speedrunning scene.

Whether enjoyed as an individual’s test against their own abilities, an aficionado’s record-breaking run, or just a simple, sick, and shameless dose of bombastic catharsis, Huntdown remains — in each instance — gaming in its purest form, offering impactful bursts of fast & furious gameplay, stained with old-school visuals and backed by a wicked score. If you’re yet to check out its raw, unapologetic action, maybe it’s time to step away from the bright lights and big bucks of gaming’s Hollywood endeavors and come out to play-ay in the bad part of town.

Huntdown launches on Steam May 12. It is out now on PS4, Xbox One, Switch and Epic Games Store.