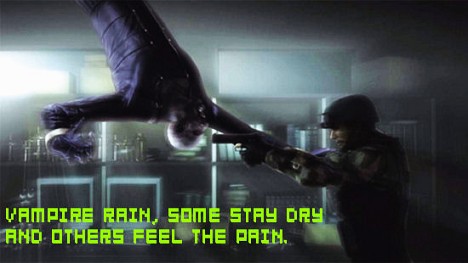 That’s it boys, the console war is finally over. You can roll out the red carpet and welcome your new king, as publisher AQ interactive confirms that Vampire Rain, up until now a hot Xbox 360 exclusive, is coming to the PlayStation 3.

For the past year, Sony and Microsoft have tussled over those all-important exclusives. Sony would love Gears of War, while Microsoft would consider Metal Gear Solid quite the coup. However, the latter company has always had the edge thanks to Vampire Rain. The horror game is a unique blend of underpowered weaponry and shoddily stitched together stealth that gamers found irresistible. Quite simply, it is the best game the 360 has ever had, and losing its exclusivity is going to be devastating for the company.

While analysts are not predicting total bankruptcy for Microsoft, it is rumored that this announcement will be a financial nightmare, and could very likely see MS selling its games division to Kentucky Fried Chicken. Once the renamed Vampire Rain: Altered Species hits the PlayStation 3, it is believed that Sony stock will rise so high that Wall Street will actually bleed — real blood will seep from building walls and paving slabs as the location itself hemorrhages under the pressure of pure concentrated profit.

Hope you enjoyed the console war while it lasted. At least the dream of a Windows Vista blended with eleven herbs and spices will now be a reality.

Filed under... #Controversy#Does it suck?