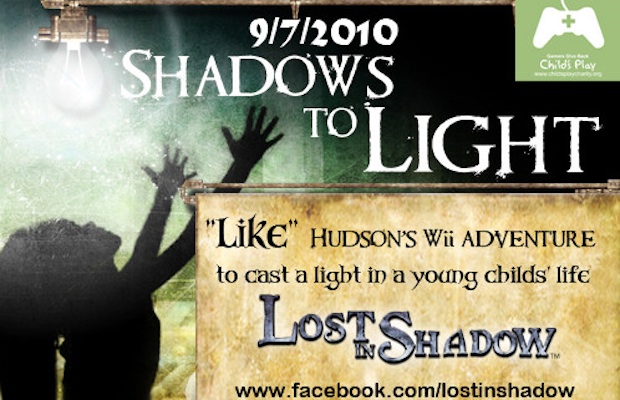 Wanna feel good about yourself? Head on over to Hudson’s Lost in Shadow page on Facebook and “like” it. Why would that make you feel good? Hudson is donating 10 cents for every new “like” they get on this page to the Child’s Play charity. That’s about the easiest thing you could do to help this popular gaming charity. If you haven’t heard of it yet, Penny Arcade’s Child’s Play gives games, toys and more to sick kids stuck in hospitals across America.

If you’re feeling even more charitable, change your profile picture to a picture of a shadow. For this, Hudson will donate $1 to Child’s Play. All the “likes” and shadow pictures will be tallied on Shadows to Light Day, September 7th.

Speaking of Penny Arcade and Hudson, Hudson will be there this week at PAX and they’ll have Lost in Shadow on the show floor for you to play. It will be released on the Wii on January 4th of next year.