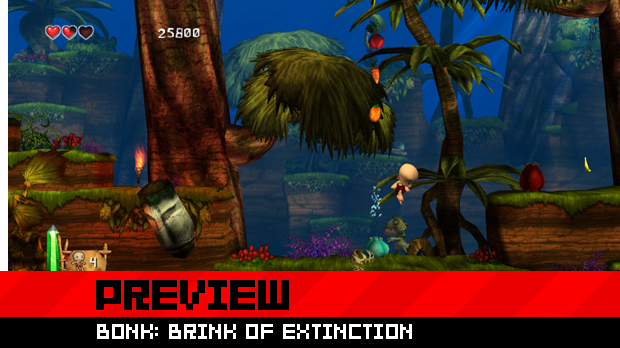 Most gamers can remember the so-called console wars of the 16-bit generation. At the time, each of the console competitors used every advantage they could to show how their system was the right system to own. Along with graphics and other features, companies leveraged the coolness factor of their system’s mascots. Nintendo had cemented Mario early on, while Sega finally got around to creating Sonic, and the TurboGrafix-16 wisely dropped Keith Courage in favor of a more marketable and all around better mascot, Bonk.

Sadly, the TG-16 did not gain enough market share to warrant a follow-up system in the states, and minus the few outings Bonk had for Nintendo handhelds, he is still fondly thought of as a mascot of days gone by. Now here would be the sentence in which I would say “until now.” You know what, that sentence will do just fine. Hudson Entertainment is bringing back Bonk and his platforming ways. To Bonk fans everywhere that’s good news, but unfortunately that’s the only good news.

From the ground up, what was shown and playable of Bonk: Brink of Extinction had the right mix of game elements you would need to bring an old platforming franchise back for old and new fans alike. The 2D levels are in place, but now with 3D character models. There’s a world map to traverse instead of having to play the whole game at once. There are online and co-op modes so you and friends can retro game together to your heart’s content. And you get the same old Bonk as before, but now with many new abilities.

Except, it doesn’t really feel like the same old Bonk. The Bonk of old had a certain charm to him that doesn’t come through in this version. What made Bonk so adorable back in the day was that he was a little guy who was being tough, not a tough guy who was little. In this version he’s just a cute little guy. By no means is that a bad thing, it’s just that there’s no personality to the character other than the cuteness.

As far as the levels go, you can see from the screen shots that the bright colorful nature of the series has remained in tact. Many old franchises that relaunch seem to forget that the bright colors and snappy graphics of yesteryear were an important part of the attraction (looking at you, Rocket Knight). The new Bonk certainly comes through in this department, but it falls a little flat in its level design. Although pretty to look at, the levels are wide open with little challenge in way of enemy placement and physical layout. It’s as if the level design was initially geared towards the co-op play as opposed to a solid single player experience, and because of that there really wasn’t much in the way of fun or challenge when played alone.

Regardless of whether you’re playing alone or with friends, you will notice that the controls also need some work. Bonk’s signature moves, the headbutt and the spinning aerial headbutt, look like they’re missing some frames of animation and feel very disconnected from player input. Overall, the whole controlling aspect of the game felt loose, especially with respect to Bonk’s controls, and this will need to be addressed to appease any fans of the original series.

Which at least brings me to some good news for those fans! I’m informed that Bonk: Brink of Extinction is still very much a work in progress, and what was shown is not indicative if the final product. This is very, very good news since it will give the developers and Hudson time to make Bonk’s return a triumphant one. Too many companies who bring back old platformers make the mistake of thinking a platformer is just “walk to the right and jump.” Considering how well the Bomberman franchise has been treated over the years, it would be a shame to see Bonk get this treatment. Especially since there are plenty of gamers out there that want to see him succeed.

Filed under... #Destructoid on assignment#Hudson#PSN#WiiWare