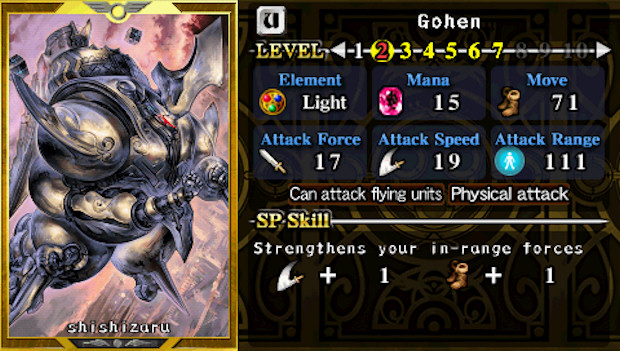 Is it just me, or is the tower defense genre becoming the latest overly-exploited trend in the videogame industry? I guess since they’re so easy to design and the concept is something that anybody can grasp, it’s hardly surprising that so many have been popping up, especially on portable platforms. Speaking of which, here’s Hudson with Creature Defense for the PSP.

Creature Defense does things a little differently by bringing in another exploited videogame trope — card games. Yes, Japan’s obsession with cards has also been crammed into Creature Defense, lending more strategy to the usual “build towers, wait for monsters” gameplay by letting players draw cards that will affect the course of each stage. Special skills, attacks and monsters will all appear during a stage and players will need to deal with them as and when they appear.

So, Creature Defense may be cobbled together from well-worn game ideas, but they’ve not been blended together before so it may just work out well. Also, the game looks really quite pretty so far, and the monster designs are quite awesome. We’ll have to wait and see whether or not this is a worthy edition to the tower defense genre.

San Mateo, Calif. – Oct. 16, 2009 – PSP™ owners will get a taste of something new and addictive this Fall with the downloadable strategy title Creature Defense. Set to be published by Hudson Entertainment, the North and South American publishing arm of HUDSON SOFT, Creature Defense will take the best elements of both the growingly popular “Tower Defense” simulation game and add in card-based gaming fundamentals to create a new challenge in strategy games.

“Creature Defense comes along when Tower Defense games are taking off in prominence and fantasy card games are beginning to be integrated into videogames,” said Mike Pepe, director of marketing of Hudson Entertainment. “Strategy gamers will love the combination of these two popular gameplay aspects encapsulated into one challenging title.”

Creature Defense will place gamers in a variety of stunningly illustrated worlds where they will be tasked with defending their land from invading attackers. After creating a deck where players take into consideration the types, tolerability and elements of the enemy, the onslaught begins and continues until adversaries are defeated, or the land falls. Special skills and attacks are added to the player’s arsenal as the game goes along. With new levels and attributes to explore, as well as 50 types of Monster Cards drawn by well known illustrators available for download, Creature Defense is an ongoing adventure for strategic minded gamers.

For more information on Creature Defense, as well as other titles from Hudson Entertainment, please visit www.hudsonent.com.