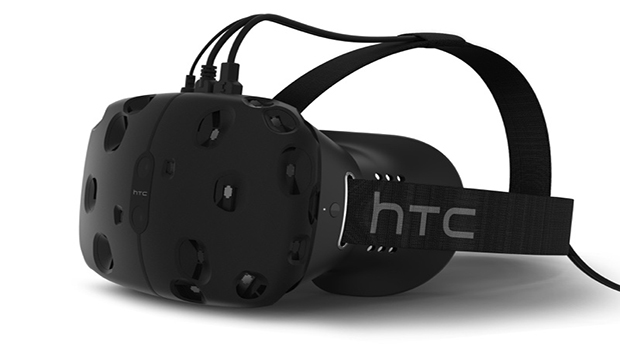 HTC is partnering with Valve on a VR headset, revealed today as the Vive. The Vive will be “powered by Steam VR,” which seems to be a software solution created by Valve for VR headsets. It is unclear at this time if Steam VR will support other devices or just the Vive.

The Vive will have dual 1200 x 1080 screens; that is a lot of pixels for each eye! The screens will also run at 90 frames per second and are said to “display photorealistic imagery.” The headset also works with base stations that can track users in a 15 x 15 foot space. For comparison, the current version of the Oculus Rift is 900 x 1080 and 75 frames per second. Audio-wise, you’ll have to plug in your own headphones to the dedicated jack, so it will be up to you to decide how “next-gen” your sound experience will be. Thankfully, the Vive package is a little more generous on the controller front. It comes with two, one for each hand.

No games have been officially announced supporting the Vive, but the official site points to the website for The Gallery Six Elements. The Gallery‘s site states it is being released “when VR hardware goes public,” and that the Vive is aiming to be in consumer hands this holiday season. Check out the opening sequence for The Gallery below, and just imagine what the future holds!