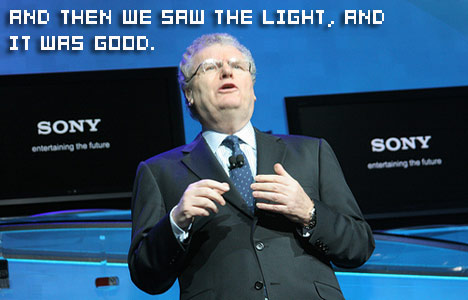 Looking back, it’s all to easy to point to the launch of the PlayStation 3 as the low point in Sony’s otherwise domineering position in the console landscape. However, it’s a bit of uncharted waters to hear the CEO of Sony himself, Howard Stringer, finally admit to the bleak outlook of the PS3 at the time.

While speaking at the Wall Street Journal’s D6 conference, Stringer commented that although the PS3 seems to be smelling like a rose at the moment, it wasn’t all that long ago when the console was very much on the ropes — and basically on life-support. Thanks to games like GTA IV, and other unmentioned titles that tapped into the PS3’s powerful architecture (Uncharted comes to mind), things have been on the up and up for them ever since.

That, and the eventual success of the Blu-ray format, kept the PS3 alive long enough for developers to release the games that would make the console relevant in the eyes of consumers. All too aware of what was riding on the battle against HD-DVD (and Sony’s previous record of proprietary formats), Stringer joked that had Blu-ray lost this battle, “Betamax 2” would be etched on his tombstone.

For once, it’s nice to see Sony admit the obvious, and having it come from the top-tier is a great start. Let’s just hope that they keep this information (their missteps) filed away in the back of their minds, so that we don’t end up with a repeat of a part of what nearly killed a dominant brand in the first place — smoke and mirrors.