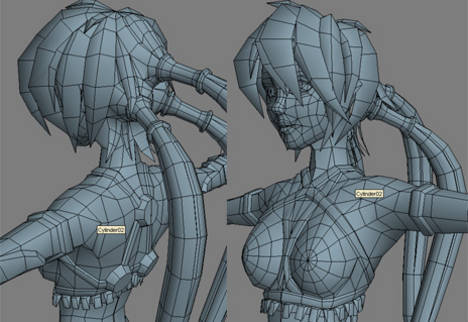 With X-Blades released and a full review forthcoming, we felt that our oversaturated coverage just wasn’t complete without one more teary-eyed look back at the most important thing this game has to offer — half-naked women with their arses hanging out.

We have made a great deal of fuss about main character Ayumi and her choice of clothes — or lack thereof. What better way to celebrate the game’s release, then, than with some exclusive concept art and a little chat with European publisher Topware to see just how far this sword-swinging slutbag has come? There is NO better way, so this is what we’re going to do.

Read on for some X-Blades imagery that, for once, is more than just a batch of screenshots. Oh and be warned … a few pictures might be considered a little NSFW.

Destructoid: Ayumi has an interesting quasi-anime look to her. How was that decided upon. Was that a look you consciously went for, or was that something occurred naturally?

Topware: Gaijaan Entertainment, the developer of X-Blades, has become well known over the years for the high level of detail and graphical depth in their games, especially in regards to the acclaimed IL2 flight simulation franchise.  A couple years back they decided to embark on a title that was a bit more “fun”, and make a game that the team could really get into and enjoy creating.  After kicking around a few ideas, they decided to develop a game that was somewhat of a tribute to their collective fascination with classic anime/manga art and stories.  With that in mind they set out to essentially create their interpretation of what a Russian model might look like in an anime series, with the result being Ayumi.  She went through a number of phases before arriving on the final design that was implemented into the game, but throughout the process there was a definite conscious attempt towards this idea.

Destructoid: The clothing is obviously very risque’ and not exactly protective when it comes to fighting hordes of monsters. Again, was this a deliberate attempt at sexing up the game, or is is there a valid justification for the knickers?

Topware: It’s really neither one nor the other.  When looking at all the anime and manga that the develop team had grown to love over the years, there is a definite trend in the animation style to the physical appearance of female characters, and their respective battle attire.  So it wasn’t really an attempt to sex her look up, but there isn’t some story or functionality validation for the outfit either, just a product of their attempt at the animation style and their tribute to it.

Destructoid: I see some of the original concept art has Ayumi wearing nothing at all, and I was told (by Nick) that she was actually intended to be nude until it was pointed out that videogame characters need clothes. Was there seriously consideration for nudity?

Topware: Haha no, she was always intended to be clothed in the long run, those concept drawings were more an inside joke attempting to poke fun at how skimpy and over the top some female anime characters are depicted, even when compared to Ayumi’s end result.

Destructoid: What drove the decision to have a female lead character in the first place?

Topware: The development team had a special fascination with those anime series that enlisted a rude, rough & tough yet sexy female character.  After debating a number of different possibilities for a lead character, the idea of the anime Russian model came up, and the team just kind of ran with it.

Destructoid: How do you make a female character stand out with iconic heroines like Lara Croft and Samus Aran providing recognizable competition? Did you take any inspiration from these famous female leads when creating Ayumi?

Topware: Absolutely, both Lara and Samus are timeless game characters that in their owns ways helped forge the path that allows characters like Ayumi, Aya Brea (Parasite Eve), Joanna Dark (Perfect Dark), and so on to see the light of day.  The big thing all these female leads have in common is their fierce attitude and self confidence, which prevents them from simply being something curvy to look at throughout their respective game.