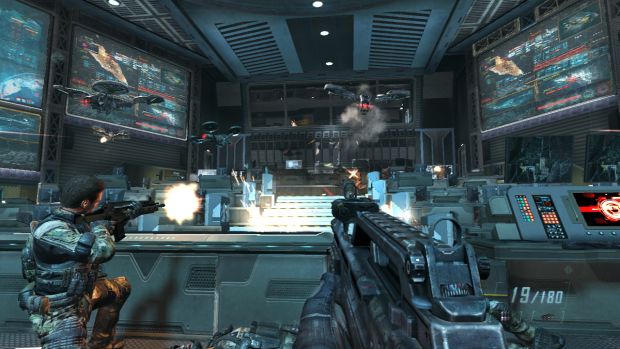 Up until now, Treyarch had history to play with in crafting their stories. History is given an entertainment spin to fit their needs, sure, but a lot of what you see and do in their games are grounded in reality, to some extent. Black Ops II, however, is a first for the studio as it’s a tale of the unknown future intertwined with the past. Dave Anthony, Head of Story at Treyarch, still wanted to present a realistic story, so he used a resource that governments all around the world use to craft the game’s 2025 setting.

“The thing that was most important for me working on this thing is that I wanted it to feel real,” David told me. “I didn’t want it to feel like it was Star Wars or something. Star Wars is a great movie, but it has a certain feel to it. It’s all shiny and laser beams everywhere, and it’s very very far in the future. I didn’t want it to feel like that. I wanted it to feel grounded, gritty, and authentic like it could actually be an extension to what could happen to today’s world. We take the real world, and we either present stories which happened in the real world that you weren’t aware of or we extrapolate the real world outwards. And then present what we think that looks like.

“The first place we started was I worked with a consultant called Peter Singer. He’s an amazing guy, a Senior fellow at the Brookings Institute in Washington. That is essentially a think tank for the US Government. In a weird way, it’s funny when you think about it in these terms, it’ll sound a little bizarre, but it’s actually true — the Government kind of has the same problem as I do, or I did when I started making this game. The Government needs to know what’s going to happen to the world in the next 10-15 years. Because that’s how they’re planning what’s going to happen to the country. That’s how they plan military budget, and defense strategies, and those kinds of things. So who do they go to when figuring out what to do? They don’t know themselves, they actually use consultants.”

“The person they go to, is actually Peter at Brookings,” David continued. “He meets with world leaders all the time — literally meets with world leaders. That’s benefit number one with Peter. The second thing is that before we even started working on this game, he’s an author and he wrote this book called Wired for War — which is just awesome, you should read it, it’s an easy read based around what’s technology going to look like in the next 10-15 years, weapons, robotics, all that kind of stuff. So he’s an expert in that. He’s also an expert in geopolitics. What’s happening politically with the world right now, where is the world trending in the next 10-15 years. So we get the benefit of the technology with him: weapons and vehicles, and that sort of thing. Plus he can actually describe to us what our world is going to look like in 15 years — what is the conflict going to be over?

“In fact, the funny thing was, in March of this year, President Obama gave a live telecast saying how he’s filing a case with the World Trade Organization against China — live on CNN, because they are monopolizing rare earth elements. So we’d actually started working on this a year before that. We’re into the story and excited about it, and I’m watching this thing on CNN and I’m just like …’What the fuck is going on?!’ It’s all unfolding around us, while we’re writing this story that’s based in this conflict around rare earth elements between America and China.”

David wouldn’t be surprised if the Obama administration had consulted Peter directly about this issue. “That’s how this game I think is rooted in authenticity. The best way to do it is to get someone who lives it. And that’s what we did with Peter.”

Check back tomorrow for an in-depth interview with David on how the story of Black Ops II was created.