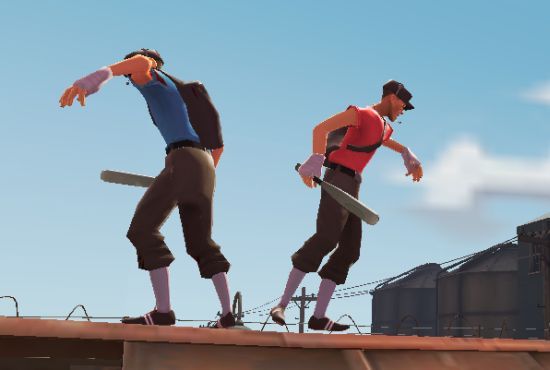 Welcome, one and all, to the first installment of our ten-part “How to not look like an idiot in Team Fortress 2” series. Starting today, and working up to the official launch of The Orange Box, we’ll be dishing out (mildly questionable) advice for every class in the game, as well as some general tips that remain common to all characters.

Today’s spotlighted character is the Scout: quick, nimble, and armed with the most powerful shotgun in the game, the Scout is a heck of a lot more powerful today than he was in the olden days of Team Fortress Classic. But how to properly use him to your advantage? And how to effectively defeat a Scout, should you ever come face-to-face with one?

If there’s one thing the Scout has an abundance of, it is speed. They move nearly twice as fast as most of the other classes, which comes in useful for quickly capturing points and nabbing flags (more on that later). Therefore, when a Scout is forced into combat, it only makes sense to continue using that very speed against the enemy.

You’ll never hear anyone complaining about bunnyhoppers in TF2; if you’ve gotta fight somebody as a Scout, do so whilst running around in seemingly random patterns and double-jumping through the air whenever and wherever possible. Of particular note is the Scout’s ability to change direction in midair; jumping forward, then double-jumping to the side, confuses the hell out of enemies. Bad guys can’t kill what they can’t hit.

It may take a while to get used to accurately aiming at your enemies whilst running around in this extraordinary manner, but with enough practice, you’ll have the ability to simultaneously dodge enemy fire and accurately fire shell after shell into your opponents.

-Don’t be afraid to retreat

As the Scout has the lowest HP level of any of the classes, every bit of damage he takes counts for quite a bit. Even a Medic, the weakest combat class, can kill a Scout with a good three or four seconds of sustained fire from his syringe-gun.

With that in mind, don’t be afraid to run away if things get hot. Health is sprinkled liberally throughout all of the current maps and the Scout is far too quick to be followed; should you find yourself dying, simply run away, regroup, and come back when you’re ready. The Scout moves quickly enough so that, on most maps, it’s actually quicker to retreat back to one’s spawn point and then sprint all the way back than it is to deal with the fifteen-second respawn time following a death.

Considering the Scout’s shotgun also takes a little while to reload, a quick and momentary retreat will provide the time you need to fully replenish your ammunition.

Additionally, while Scouts can hold their own in most types of one-on-one combat, they get positively raped in the simultaneous presence of two or more enemies. If a Scout runs into a room and sees two Pyros, a Heavy Weapons Guy, and a Soldier, he has every reason in the world to turn tail and find an alternate route. There’s no shame in running away — honest.

In control point maps — especially those with only one control point, a la tc_hydro — the Scout can be an invaluable tool for quickly and cheaply getting some quick territory captures. At the beginning of any given map, a Scout, or a group of Scouts, can easily sprint from their respawn point and capture the nearest control points (thus decreasing their team’s respawn time and, depending on the map, potentially moving their spawn location forward). The Scout’s speed, when combined with the fact that they capture control points twice as fast as any other class, makes them invaluable for quickly taking over the map.

It’s irritating, yes, but it’s also totally fair within the rules of the game, and serves as a quick way of increasing one’s score. Hey — at the end of the day, it’s the losing team’s fault if they couldn’t be arsed to mount a quick defense.

The Scout’s shotgun is essentially lethal at point-blank range when fired at an enemy’s back. Hiding behind corners and sneaking up on enemies might not seem like the most obvious strategy to use as the speedy Scout, but it can be remarkably effective when used correctly. If the enemy team hasn’t had to deal with too many spies thus far in the game, they’re probably not going to be paranoid enough to continually turn around to check their six o’ clocks. Use this to your advantage.

A lot of Scouts love to switch between shotgun and baseball bat, opting to ignore their pistol entirely. I don’t subscribe to this philosophy, for two reasons:

1. Switching to the baseball bat necessitates close-quarters combat — a bad idea for a character class with such low HP.

2. The pistol really isn’t that bad.

Yeah, it’s inaccurate, it has a very low max ammo capacity, and it’s kind of weak, but when fired repeatedly from a safe distance — say, far enough away so a Pyro can’t torch you, but close enough so the pistol’s inaccuracy becomes negligible — it can serve as a handy method of finishing off the opponents whom you emptied your shotgun into mere moments before.

At the very least, a Scout can combine a pistol attack with a retreat: simply face the enemy and run backwards whilst emptying clip after clip at them. It probably won’t result in a kill, but you’ll have at least done some damage, and provided some extra cover for your retreat.

-Get your “Super Mario” on

If you haven’t yet listened to the developer’s commentary, you probably haven’t yet realized that every single map has been specifically designed to cater to each of the different nine classes. Now, with most of the characters, these designs are pretty boring — high windows for Snipers, hidden corners for Pyros, etcetera — but the Scout’s are a hell of a lot of fun.

Essentially, every wide open area such as the bridge in ctf_2fort or the capture points in cp_gravelpit possess large platforms which can only be accessed by Scouts (or grenade-jumping Demomen, but they can’t really do much once they’re actually up there). As a Scout, it is possible to traverse an entire capture area without touching the ground even once — and I’ve seen it happen, multiple times.

Not only does it look cool as hell, and not only is it extremely fun to do, but it also puts you at a significant advantage over your enemies. Jumping from plateau to plateau makes it extremely difficult for long-range fighters like the Sniper to get a bead on you, and short-range weapons like the Pyro’s flamethrower can’t possibly reach you at that altitude. The expert Scout can jump like a demented squirrel from structure to structure, pause to make a quick capture, and then jump away again without taking a significant amount of damage.

-Try not to act like Rambo
For all the strengths and benefits of the Scout class, one must always remember that the Scout is not a great combat character. As said earlier, he can take most classes in a one-on-one fight, but the chances of only meeting lone enemies throughout the duration of a map are, to put it bluntly, pretty goddamned slim. The ideal Scout focuses on capturing points, stealing flags, and generally complicating things for the enemy — he prioritizes territory first, kills second.

Think of the old Muhammad Ali boxing cliche; “float like a butterfly, sting like a bee.” Scouts aren’t the guys used for large-scale attacks, but they can freely roam about the map, biding their time, before dealing critical damage to the enemy team.

Do not — I repeat — do not underestimate the Scout’s killing power. In the original TFC, the scout had about three HP and shot bullets made of candy, so it’s understandable that longtime players might brush the Scout off as the same harmless annoyance he used to be.

Seeing a Scout should instill roughly the same amount of fear one would experience when seeing a Heavy Weapons guy; you can handle him, yeah, but not very easily, and not without losing some health. Generally, you’ll want make sure the Scout can’t get too close to you, but considering his tremendous speed, this isn’t always an option.

If you find yourself unable to run from a Scout, make sure to move around as much as possible. As the Scout’s main weapon only has six shots, a crappy firing rate, and a worse reload time, your best best is to get him to waste his ammo as you plug away at him with a reliable short-range weapon. He’s got very little HP, so doing even an average amount of damage to him will either kill him, or force him to retreat (at which point you can run and get healing). Force the Scout to run around corners to get at you, then hit him with your most powerful weapon — this applies especially to the Pyro and the Soldier.

Engineer sentries are absolutely awesome in dealing with Scouts. If a Scout finds himself within the sights of a level one sentry for more than, say, two seconds, he’s dead. Placing a Sentry gun near your command point or flag makes it wholly impossible for the Scout to dominate the map on his own; the time it will take him to wait for a Soldier or a Spy to destroy your sentry gun will give you the extra time needed to take him out.

If you’re a Spy, don’t even bother engaging the Scout unless he’s standing relatively still, with his back to you. He’s too damn fast and your weapons are too damn weak. Just cloak, and run right past him.

If you’re a Heavy Weapons Guy, just make sure you’ve got your minigun rotating before the Scout shows up, and let loose on him the moment you see him. So long as you’re at relatively full health you’ll be able to kill him with no problem — just don’t let him get behind you, because then you’ll spend precious seconds turning to find him as he circle-strafes around your body, pumping it full of buckshot.