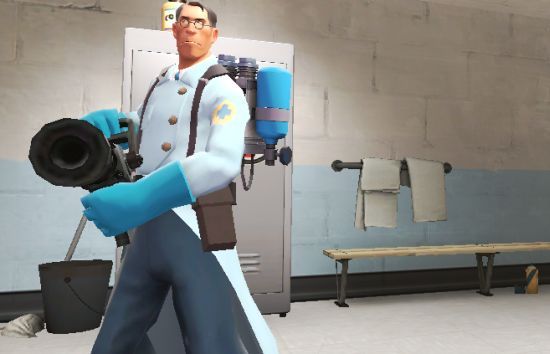 This is part seven of ten in our series, “How to not look like an idiot in Team Fortress 2” — yet, interestingly enough, it is the only installment which opens with a selection from a recent Doctor Who episode instead of a proper introduction.

“You chose it. Psychiatrist’s field day.”

“As you chose yours. ‘The man who makes people better’ — how sanctimonious is that?”

[Special thanks to Andr3x for posing in the above picture.]

The Ubercharge meter also happens to heal faster when you heal wounded teammates, versus perfectly healthy ones. Finding and healing your wounded comrades (unless you’re sticking with a Heavy, in which case you should probably stay near him and let your teammates come to you) is a win-win; they get healed to above 100% of their life bar, and you get closer and closer to the sought-after Ubercharge.

-Pay attention to cries of, “MEDIC!”

The “MEDIC!” button is a bit overused, thanks to its ease of access (just hit E) and its assumed usefulness. People hit E when they’re barely injured, or when they want someone to switch to the Medic class, or if they’re Spies and they want to try some complicated mind games on the enemy team.

As such, it’s pretty easy to ignore the “MEDIC!” cries, even when you are a medic. Even the large, colored icon which shows up whenever a teammate presses E can be easily ignored by distracted Medics. Still, it pays to be watchful: train yourself to immediately respond to “MEDIC!” calls, and try to notice when a healing request icon appears on screen. In short, just pay attention — nothing is more irritating than having only 2 HP left and running to a Medic, only to have to hit the E key over and over and over until the damned doctor turns around.

As mentioned in a previous guide, a Medic and a Heavy Weapons Guy are a match made in combat heaven. The Heavy fires, the Medic heals — simple.

As Medic, your job isn’t limited to just healing your large friend at all times. A good Medic partner also watches his Heavy’s back for Spies (far too often have I seen a gleeful Spy take down two Medics and a Heavy just because they all failed to turn around every once in a while as they ran forward), and should ideally communicate with his Heavy at all times concerning the status of his Ubercharge and his own personal health. Additionally, don’t hesitate to use the Heavy as a large, mobile piece of cover; feel free to crouch behind him to avoid enemy fire whenever the need arises. The relationship between Medic and Heavy should be mutualistic, not commensalistic: healing should beget protection, not just improved assault capabilities.

Either by using the voice command system or a headset, ideally. Typing is too slow.

The Ubercharge is extremely important to any good offense, and your Heavy partner needs to know exactly where and when you plan to use it; many a Medic I’ve played with have gotten their Ubercharges ready and then hastily activated them when there were almost no enemies in sight, thus wasting all our hard work.

The Ubercharge should ideally be used when attacking a room full of people or sentry guns, or when charging a major command point. It can also be used in a defensive capability, but this is much less effective as the attacking enemies will simply run away and wait for the Ubercharge to die down. If you primarily use the Ubercharge on offense, however, the enemies will either retreat away from a control point you wish to capture, or they’ll have nowhere to run at all.

-Be prepared for short-range combat

Many Medics wrongly assume that their secondary weapons — the syringe-gun and the bonesaw — should only be used as last resorts. These people probably haven’t run into too many Spies.

Always be ready to hit the Q (last weapon) key at the slightest sign of trouble. Yes, it’s important to continue healing your partner, but it’s even more important to make sure that you stay alive. Don’t hesitate to shoot syringes at approaching “teammates,” or to take a bonesaw to any opportunistic Pyros who might try to ambush you. That’s why the weapons are there, and they’re pretty darn powerful so long as you stay very, very close to your opponent (the syringe gun seems to have a range of roughly seven and a half inches).

Additionally, as Spies will often intentionally kill a Heavy and then run away without bothering to attack the Medic, consider it your personal duty to avenge your Heavy and kill the Spy. Not only will it make you feel better and net you some points, but it’ll also prevent the Spy from making the same gamble again. You’ll force him to be more careful next time, which means he’ll move slower, which means you might have a better chance of spotting him before he gets too close.

-Stay out of sight

In order to maintain a healing beam from his medigun, the Medic must (A) be relatively close to his target and (B) maintain a line of sight with him. He does not need to expose himself to the same dangers that his partner jumps headfirst into.

Staying the hell out of sight not only prevents you from dying (thereby making it much more difficult to enemies to kill the person you’re healing), but puts you in a good position to stay alert and keep an eye on your buddy’s back. It’s much, much easier to look out for enemy Spies when you don’t have to deal with rockets and bullets smacking around your body from all directions.

-Don’t forget to get some healing of your own

Medics slowly gain their health back over time. The key word in that sentence was “slowly.” The Medic’s self-healing powers* aren’t sufficient for long-term survival; a hardworking Medic will almost constantly be attacked, in some form or another, whenever he moves from place to place. As such, it becomes necessary to beg, borrow, or steal every piece of health you can get your hands on. As stated before: the longer you live, the longer your partner lives, the better the team performs. Which brings us to my next point:

Two Medics centering around a single offensive teammate not only makes said teammate much more difficult to kill, but expontentially increases the life expectancy of the Medics themselves.

Instead of having to stop healing the Heavy in order to run and find healing of your own or combat an incoming enemy Spy, these jobs can be left to only one Medic while the other continues to heal their assault buddy. When one Medic gets hurt, he can immediately be healed by the other; very much a win-win situation.

The hasty, dumber members of your team will always forget that “sudden death” means “you can’t refill your health at the goddamn spawn point anymore.” There’s a case to be made that these guys deserve to die if they can’t remember this fact after a few hours of continuous play, but remember the Hippocratic oath — do no harm.

During a sudden death round, your team needs at least one Medic and one Engineer, both of whom stay the hell back and support everyone else.

UPDATE: Nyteshade is way better at being a Medic than I am:

“One MAJOR trick I’ve learned as a Medic is to have a Soldier or Demo blow themselves up at the start of the stage. On any stage that starts with a 60 second “setup” phase, you can easily get an fully charged Uber before the round starts, leading to some massive early killing.

Just have the Soldier or Demo get their health low (stickys work best, but rockets are also good) and then keep it low while you heal them. The quickest way is to have the Demo or Soldier put their back to a corner and shoot the ground (or sticky). It’ll stop them from flying away and makes for a quick Uber. Remember, the lower the health, the faster the charge, if the Soldier/Demo is any good, they can reload between blasts and fire fast enough to keep their health in the red, and charging an Uber in under 30 seconds.

Another good Medic tactic is to dance… aka always keep moving. Not only can you “feel” an invisible spy by moving into him and being stopped, it makes it next to impossible for said evil spies get a back-stab on you. It also makes it harder for the Soldiers and Demos to get that lucky one shot gib (direct hit), leaving your Heavy for dead.

Yet another nifty trick I’ve learned spending way to much time as a Medic is taking down enemies/turrets from angles and distances that other classes have trouble with. The needles fired from the needle gun have a very fast downward arc, which can be used to take out people and turrets from over a barrier/wall, or from weird angles. You can also aim way up and take advantage of the arc and distance to take out turrets well out of their range. The needle gun is your friend.”

As the Medic doesn’t have a particularly high amount of health and that his own personal weapons, while good in a short-range fight, are intentionally weaker than the weapons of every other class, the real key is simply getting to him rather than learning how to best him in single combat. So long as you catch him by surprise and don’t let him bonesaw you to death, you should be okay.

To get to the Medic, a crafty Spy or a superfast Scout are useful, but risky. The Pyro may be the ideal class for taking out Medics; if you hide around a corner or behind a doorway and let the guy whom the Medic is healing walk through without firing at him, then the Medic will naturally assume that the way is perfectly safe and run right after him, thus giving you the chance to ambush and torch his ass.

Additionally, a cleverly placed Sniper — and I mean really cleverly placed — might be able to see into the nooks and crannies behind walls and doorways where Medics tend to hide whilst their Heavies are doing the dirty work for them.

It’s tough to write a lot about how to kill a Medic, as it really has more to do with training yourself to go after him first. He’s not powerful enough to withstand a sustained assault from anyone with a decent gun, so just find a way to get to him, and remember that you gank him first, then his friend. Unless you’re a Spy who feels that the potential damage caused by the Heavy he’s healing is more troublesome than the Medic himself, of course; in that case, just backstab the Heavy and either run for your life, or turn and face the Medic. You’ll probably die, but taking out the Heavy might have been worth your sacrifice.