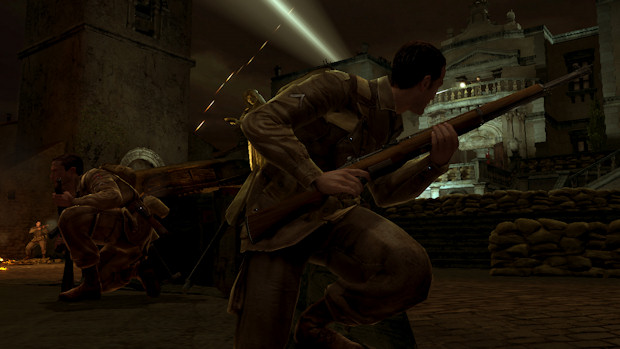 World War II games. Everybody’s played them, everybody’s sick of them. Unless they’re very easily pleased. The vast majority of us have stormed the beaches and liberated the cities so many times that we’re very much over the idea of bringing sweet Allied retribution to Fritz and his cackling Nazi chums.

Yes, the World War II “genre” is overdone and killing Germans just isn’t as fun as it used to be. This isn’t helped by the volume of WWII games that simply aren’t very good. If you make a World War II game these days, you have to stand out, you have to provide a memorable experience and, most importantly of all, you have to not suck.

Luckily, if you’re a budding developer hoping to make the next big war game, Destructoid is here to help. Read on (and be careful of a boob screenshot) to learn how to make a World War II game that doen’t suck.

Normandy? Done it. Stalingrad? No thanks. Berlin? It’s been done so many, many times.

A World War II shooter benefits from a setting not typically seen in a dozen other games of the same ilk. The fighting didn’t just take place in Russia, France and Germany, guys. Even if the game must be set in those three countries, at least try and shake things up a little by choosing places you just don’t see very often. A little French countryside, perhaps, or a small German village as opposed to Berlin. There are all sorts of locations that can be picked, and you don’t always have to make the main character a soldier during a big battle.

Pandemic’s upcoming WWII game The Saboteur is one such game that is trying a more unique setting. It’s set in Paris during the Nazi occupation, and players have to sneakily screw up German operations around the city. It’s a significant departure from the same old “guns n’ glory” battlefields that make up so many other war games. Simply changing the setting within the setting can make all the difference in the world.

You know, not every WWII game has to be a first-person-shooter. It seems to me that third-person-action games are severely under-represented within the WWII setting. We have a few, with the aforementioned Saboteur being among them, but it seems that — barring the occasional strategy game — nearly every WWII game feels the need to be some sort of first-person affair.

The FPS market has, itself, become incredibly saturated and I’m sure that the gameplay perspective is helping to make players feel sour about WWII titles. When I even say “World War II” game, what do you imagine first? Most of you surely think of Call of Duty, or Medal of Honor, or any number of other FPS games.

Very much like the setting, a simple alteration of perspective can make a dramatic difference to how a game is received.

What’s the deal with not having Adolf Hitler in WWII games? If the original Wolfenstein taught us anything, it’s that shooting Hitler is always good. Not enough games allow us to shovel bullets into the arse of one of history’s greatest monsters, and I want to know why. As far as I’m concerned, there’s nothing tasteless about repeatedly killing Hitler. Shooting simple Nazis, who were mostly just oblivious soldiers, really isn’t as satisfying or righteous as taking out Himmler, Mengele, or any of the other truly evil shits who were manipulating the Nazi war machine.

Why are we always punishing the faceless German soldiers when we could be shooting De Führer in the face with rockets? Any game that promotes the varied and brutal mutilation of Germany’s worst chancellor would instantly be hailed as a classic. At least by me. It’s a shame that most WWII games pussy out and make up some fictional German general who we’re supposed to hate more than Adolf bloody Hitler!

At least reference the Holocaust and/or other Nazi oppression:

Now hear me out, because I know that you’re instantly assuming this will be a tasteless and facetious suggestion. I’m being serious, though. It’s so easy to throw Nazis into a videogame and simply say, “These guys are evil, shoot them please!” However, we never see Nazis actually being very oppressive and evil in the games themselves, preferring instead to simply fulfill pre-packaged villain stereotypes that any other type of bad guy is capable of. While I’m obviously not suggesting we have massive interactive gas chamber sequences and scenes full of emaciated Jewish prisoners, I do think that WWII games would have a bit more weight and importance if they actually tried to touch upon some of the most horrific issues involving the Nazi regime.

For everything terrible that time-traveling shooter Darkest of Days did, it at least had one sequence that almost approached interesting. Late in the game, you’re taken prisoner by German soldiers and are led through a stark, isolated POW camp, full of barbed wire, searchlights and snapping dogs. It was truly oppressive and, had the game not looked like shit and been simply awful, it may have been a fantastic videogame moment. More games need to have these sorts of moments if they want to make a truly compelling World War II title.

At the moment, the only real difference between a WWII game and any other generic shooter is that the enemies shout, “Schnell!” The real Nazi regime was founded on racial hatred, resentment and the sense that some lives were more valid and worthy than others. It was an evil, brutal, twisted institution and that’s something that videogames don’t even try to capture. Perhaps it’s because it takes more effort than developers care to put into their games. That’s a real shame.

This always annoys me when it happens. The Germans never actually called themselves Nazis, so having a maniacal German general scream that “Ze Nazis vill finally conquer ze vorld,” really takes the immersion out of the moment. Germans referred to themselves as National Socialists after Hitler took power, and the word “Nazi” was almost completely wiped out from territories ruled by the Third Reich. In fact, in Austria the term was used only by opponents of the National Socialists and became a derogatory term.

So yeah, Germans shouldn’t be calling themselves Nazis. In fact, I don’t think I’ve ever heard the term “National Socialist” used in a WWII videogame. It displays a very blatant lack of basic research.

Ever since that evil German had his face melted off by the Arc of the Covenant in Indiana Jones, Nazism and Occultism have gone hand in hand. There’s just something very interesting about the idea of Nazis dabbling in the black arts, and adding a supernatural element to your average World War II game helps to keep things interesting. One perfect example would be Bloodrayne, a game that merged demons, vampires and the Third Reich in one of the stupidest, most ludicrous, shittily fun games of the last generation.

We’ve fired far too many sniper rifles and flamethrowers in WWII games. Wolfenstein manages to keep things fun with electric cannons and magical powers. Plus they throw in a few Nazis skellingtons as well. Say what you will about the latest Wolfenstein, it was far more interesting than the average World War II game. Nazi frigging skellingtons!

Protip: America did not single-handedly win the war:

Now, this is a bold move and one I wouldn’t actually expect any developer to ever have the balls to do, but if one were to successfully make a game where the player takes on the role of a German soldier as opposed to the typical American, gum-chewing hero, then I feel there would be potential for an amazingly impressive World War II videogame. It’s just so incredibly easy to make a game where the Germans are the baddies and the Americans are the saintly heroes, and I’d love to see a studio actually be creative enough to make a compelling Nazi campaign in anything that isn’t a disconnected and impersonal RTS.

Obviously you don’t have to be playing as a laughing SS officer who performs execution attacks on Jews and guns down gypsies. Perhaps a naive young German soldier who starts the game as an avid believer in the Hitler myth and slowly grows to learn how monstrous the regime is. The game could explore the “banality of evil” theory and the moral obligation of those soldiers who served Germany during the war. The wealth of themes that could be examined through such a game is staggering.

Sadly of course, this is one thing that will probably never happen. It’s not realistic to assume that any publisher would risk the controversy and backlash from a general public that often has severe difficulty issues when it comes to understand a different artistic approach. Most people seem ill-equipped to grasp the concept of unique and adult themes in videogames without jumping to conclusions. It’s really very sad, and while I am idealistic enough to believe a Nazi-focused videogame would work, I’m too realistic to believe that anybody would ever dare attempt it properly.

I guess unless that ever changes, it’s your typical, America-centric, beach-storming FPS affair for World War II games.