Longtime fans know the King’s Rock is a special item in Pokemon. On its own, it grants the Pokemon holding it a chance to make the enemy flinch with each attack. This is handy enough, but the King’s Rock also allows Slowpoke to evolve into Slowking if it is traded while holding one. This is the only way to get Slowking in-game without hoping to encounter it in a 5 Star or 6 Star Tera Raid Battle, so sooner than later you’ll want one.

Fortunately, Pokemon Scarlet & Violet gives you multiple opportunities to get a King’s Rock for yourself. In fact, you’ll automatically have one in your inventory if you play the postgame content! 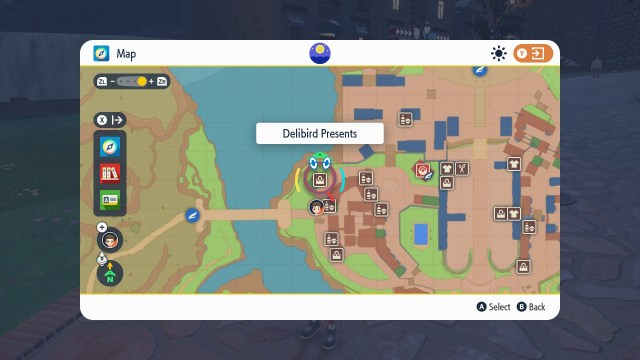 Where to find the King’s Rock

There are three different ways to get a King’s Rock in Scarlet & Violet.

The first and most straightforward option is at Delibird Presents in Mesagoza. After you defeat four Gym Leaders, you’ll be able to get a King’s Rock here for 10,000 Pokedollars. There are multiple Delibird Presents locations in Mesagoza, but I find the location on the western side of the map easiest to access (pictured above).

You can also get a King’s Rock by visiting the auctions in Porto Marinada. This is unlocked after defeating the Water-Type Gym Leader Kofu, who you’ll naturally fight fourth if you are completing Gym Battles in order. This makes auctions essentially equal to visiting Delibird Presents in viability, since both should unlock around the same time. The items available via auction change every day, so this route is a bit random as well.

In either case, you should have enough money in your pocket to afford a King’s Rock. If you need cash, look through your items to see if you have Nuggets or other items that exist to be sold. If that’s still not enough, consider getting the Amulet Coin and fighting some Pokemon Trainers.

That said, if you are in no rush to get Slowking, you can get a King’s Rock for free. In the postgame, you will have the option to challenge all the Gym Leaders again. These encounters shouldn’t make you sweat at this stage, so fly around and knock them out one-by-one. Your reward at the end of this questline is a King’s Rock. While 10,000 Pokedollars is a drop in the bucket considering the stacks of cash you’ll have by now, this is a good way to save a few bucks if you’d prefer. The choice is yours!