Become friends to the end

There is no “best Pokemon,” but Lucario is pretty great. With solid typing, great offensive stats, and a strong move pool, this is one monster worthy of being on your team. Evolving your Riolu into Lucario is a bit awkward though.

Like in previous Pokemon games, Riolu does not evolve at a set level. Rather, you need to build its friendship and level it up during the day. The latter part of this can be a little cumbersome since Scarlet & Violet have no method of changing the time of day at will. However, while you’re waiting for the right time of day, you can focus on making Riolu friendly towards you first. Here’s what you need to do. 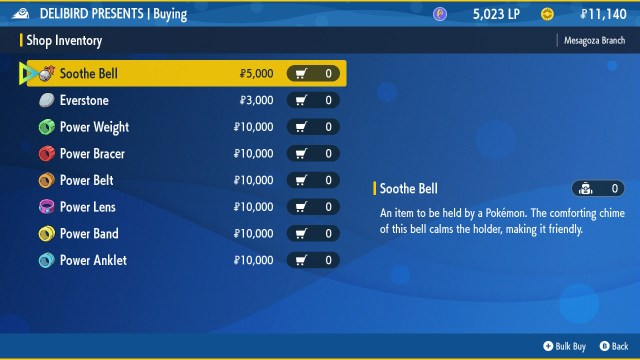 How to boost Riolu’s Friendship

Friendship is one of many hidden mechanics in the Pokemon franchise. If you’ve noticed Pokemon surviving with 1 HP or getting extra critical hits, that means its friendship with you is strong. In other words, you’ve probably boosted friendship with many Pokemon without even realizing it.

For starters, Pokemon will become friendly with you as you travel together. Leveling up through battling will increase a Pokemon’s friendship, while fainting will decrease it. Scarlet & Violet let you take a Pokemon out to auto-battle monsters by pressing R, which is another great way to keep that friendship building. Keep Riolu out while you’re exploring to passively nudge it closer to evolution!

There are several items that will help boost friendship as well. Items that raise and lower EVs boost friendship, like Calcium and Kelpsy Berries. That said, the most accessible tool you can find early game is the Soothe Bell. This held item boosts the rate at which a Pokemon accrues friendship and can be obtained at the very start of the game! In Mesagoza City, check out Delibird Presents. There are multiple locations in the city, though I find the shop near the Western Gate easiest to access (location pictured above). Once inside, select the “General Goods” category. You’ll find the Soothe Bell here for 5,000 Pokedollars, which you should have no problem obtaining even in the early game. Slap this on Riolu and you should have enough friendship to evolve it in no time.

That said, if you’re looking for Lucario strictly for Pokedex completion, you may not need to bother with any of this. Lucario can be found in the wild in North Province Area One, Area Two, and the Dalizapa Passage. As you hunt for wild Pokemon, there’s a good chance you’ll encounter Lucario naturally!