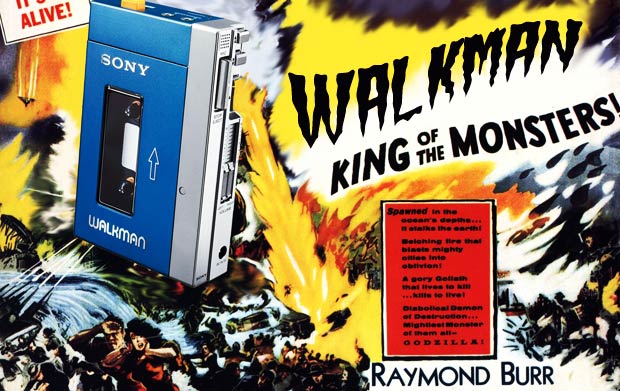 Yes, that Walkman. The trusty sidekick that kept you sane on the way to school in the ’80s and ’90s. We watched it evolve — becoming smaller, slimmer, more functional. Eventually it grew into a CD player, and not long afterward came the MiniDisc version. But much like Frankenstein’s creation and countless other well-intended experiments gone awry, Sony’s little device has now outgrown its skin and transformed into something not quite as benevolent as its masters had hoped.

Like a Kaiju monster awakened from its long slumber by the folly of a selfish mankind, the once-mighty Walkman has risen from the sea and now stands poised over the city that Sony built, ready to get … you know, stompy. The peaceful gaming paradise that Sony has constructed over the last two console generations now cowers in the shadow of an ancient beast that threatens to destroy it, and I’m not sure they’re even aware of its presence.

You might want to shift your gaze upward and get a look at what’s blocking out the sun, Sony. I’ll tell you why after the jump.

The enemy of my enemy is my friend.

Or he should be. If you were smart, you might at least invite him out for a beer. Let’s think hypothetically for a moment. Suppose there was some truth to all these recent rumors that Apple has been sitting poolside, thinking of dipping its feet into the console market. As far as we gamers are concerned, Sony’s biggest competitor and greatest threat is Microsoft, is it not?

Imagine, just for a moment, what might happen if Sony and Apple sat down over brunch together to discuss their common enemy. All sorts of wild ideas come to mind; visions of incredible devices that could change the electronic entertainment industry forever. It’s already been rumored that the next generation of PSP will boast a touch screen, and that Sony would like nothing more than to include some sort of cell functionality in order to take down the iPhone. Why?

What if they were the same device? I know it sounds absurd, but humor me. What if the new PSP and the next iPhone were the same product? Where does that leave Microsoft, who doesn’t even have a handheld? Or a phone? Wouldn’t iPhone gaming, which has already done a remarkable job on its own, benefit even further from involvement by the PlayStation brand? Wouldn’t the PSP, which has wasted so much time trying to be a media player, be better off with a little help from the people who make the most successful one out there?

Or to step away from gaming just a bit, both companies also take pride in their products that don’t fit in your pocket. Sony’s Vaio line, for instance, or their ultra-thin laptops. Apple TV. There are any number of products from both companies that could be combined or borrowed from to create something amazing. Something that would actually make Microsoft think twice. God knows Sony could use a little help in the internet connectivity and online services department, and why not take a few tips from, oh, I don’t know … a computer company that owns one of the biggest and most successful digital distribution services in history?

But that won’t happen. Why? Because the iPod banished the Walkman to the depths of the sea. Sony doesn’t want to get over this. Instead of taking their lumps and moving on, they keep clawing back with their MP3 players and phones; they try to cram too much functionality into a handheld gaming platform until it does everything but play games.

OS patriotism and cries of “LOLFAG” aside, there are quite a few people out there who use Macintosh computers, whether you like it or not, and whether or not it’s got anything to do with games. What if the PS3 could boast some kind of interconnectivity with OSX, something that the Xbox could never do? Gamers love nothing more than to hate on a Mac, but you have to admit, some kind of compatibility there would give Sony something. Because what can they say at the moment? Instead they’ve become the third wheel, the guy sitting on the bench because he doesn’t want to play for either team, but doesn’t have enough friends to start one of his own.

For the love of God, let it go. I liked my Walkman too, but it’s gone now. Leave it under the sea, it wants to sleep. I realize this all sounds a bit silly, but not quite as silly as throwing away the kind of opportunities and potential that Sony refuses to look into because it’s still butthurt about the fucking Walkman.

Not to say that Sony should undoubtedly join forces with Apple, but what if they did? What if? We’ll never know, will we? You can’t have it all. There comes a point when you have to admit defeat to one of your rivals so that you can join them in taking down the other. Which one makes more sense? I don’t know about you, but I sure don’t miss my Walkman as much as I’d miss my PlayStation.