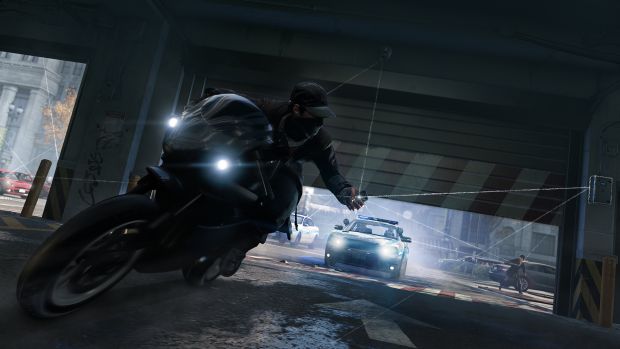 Plus, are there actual dogs in Watch Dogs?!?

Watch Dogs is giving us a huge open world full of life, all alongside some innovative new multiplayer concepts. And it’s all thanks to the new Disrupt engine. The team had some grand visions they wanted to pull off when they started work on a new engine over four years ago, and the technology they had at their disposal wouldn’t cut it.

“From the beginning we started building a new engine that we call the Disrupt engine, senior producer Dominic Guay told me. “Now we know a thing or two at Ubisoft Montreal about crafting game engines. We have the Anvil engine on Assassin’s Creed and the Dunia engine on Far Cry. We know it takes a while, so that’s why we started from the beginning.”

The Anvil and Dunia engines are quite relevant here as there are features that were taken from both of those engines and used in the construction of the Disrupt engine. So things like Assassin’s management of an open world city, and Far Cry’s vegetation and AI mechanics have been implemented in Disrupt.

That said, Disrupt has more new code than old, and most of it was built from scratch. They had to create specific tools to create their vision in efficient ways, like tools to build a modern day city like Chicago.

The preview Ubisoft offered to the press was shown on the PC, and what was on display was close to the quality one could expect out of the PlayStation 4. That said, don’t expect a major difference between current and next-gen visuals with Watch Dogs as they look pretty close to each other according to Dominic.

“Where we’re seeing a lot of difference is not just how it looks, but it’s also in the simulation. How many people are on the street, how smart is their decision making? Same thing for the drivers.”

So the game will push underlying tech more than visuals when it comes to next-gen. For instance there’s wave and wind simulations that offer a more realistic experience on the PlayStation 4 compared to the PlayStation 3.

Lastly, I just had to as Dominic if there were any actual dogs in Watch Dogs.

“No! Actually we made the conscious choice not to put dogs in there. You can’t hack into dogs for one, and they really didn’t bring much to the game at this point. And it’s really hard to pull off good looking dogs. We’ll keep that in mind for a sequel,” Dominic jokingly told me. Now I can rest easier at nights.