Talking with the developers ahead of its big launch

Any game releasing next week that isn’t a part of the big, shiny, new console generation faces the possibility of being forgotten as the industry focuses on the next-gen tech that everyone will be talking about. It would almost seem foolish to position yourself against such gladiators. But the developers at Edelweiss think their game has what it takes to stand out. Against an onslaught of sequels about to hit game stores, they’re pitching something unique with Sakuna: Of Rice and Ruin.

While many games come and go from my mind, Sakuna’s secured itself a nice, comfy spot in the back of my brain when I first saw a trailer for it back in 2018. I wasn’t familiar with the developer’s previous effort in Astebreed, but its enchanting scenery and rice farming footage made it stand out. At E3 2019, I got to try it out for myself and found it to be a charming action game with the makings of something spectacular.

At the very least, it’s different from almost everything else on the market. As I found out in an interview with Edelweiss, that’s one of the selling points they believe will keep it in the minds of gamers as it goes up against some heady competition.

As Nal, the director of Sakuna, explained to me, “There are many 2D platformer action games, but it’s rare for one to have a combat system based in fighting games, and combining this with rice-growing simulation based in Japanese fantasy makes for a completely unique experience.”

Of course, many developers promise that their game will be unique and unlike anything that came before it. Sakuna actually started out as something that wouldn’t be all that different from what we’ve seen previously from Edelweiss. After finishing development on Astebreed, the developers wanted to get away from the setting and gameplay of that game and decided to pursue a sequel to its previous title Fairy Bloom Freesia. That plan was dropped as the concept of Sakuna came together, but that doesn’t mean the two titles don’t still share a strong connection.

“All Edelweiss games are connected by the presence of the ‘World Tree’ or something similar,” CG Artist Koichi said, “so the setting of Sakuna: Of Rice and Ruin is also connected to Fairy Bloom Freesia and Astebreed. What we call ‘Yanato Mythology’ in this game, which references Japanese mythology, is founded on the existence of the World Tree.” 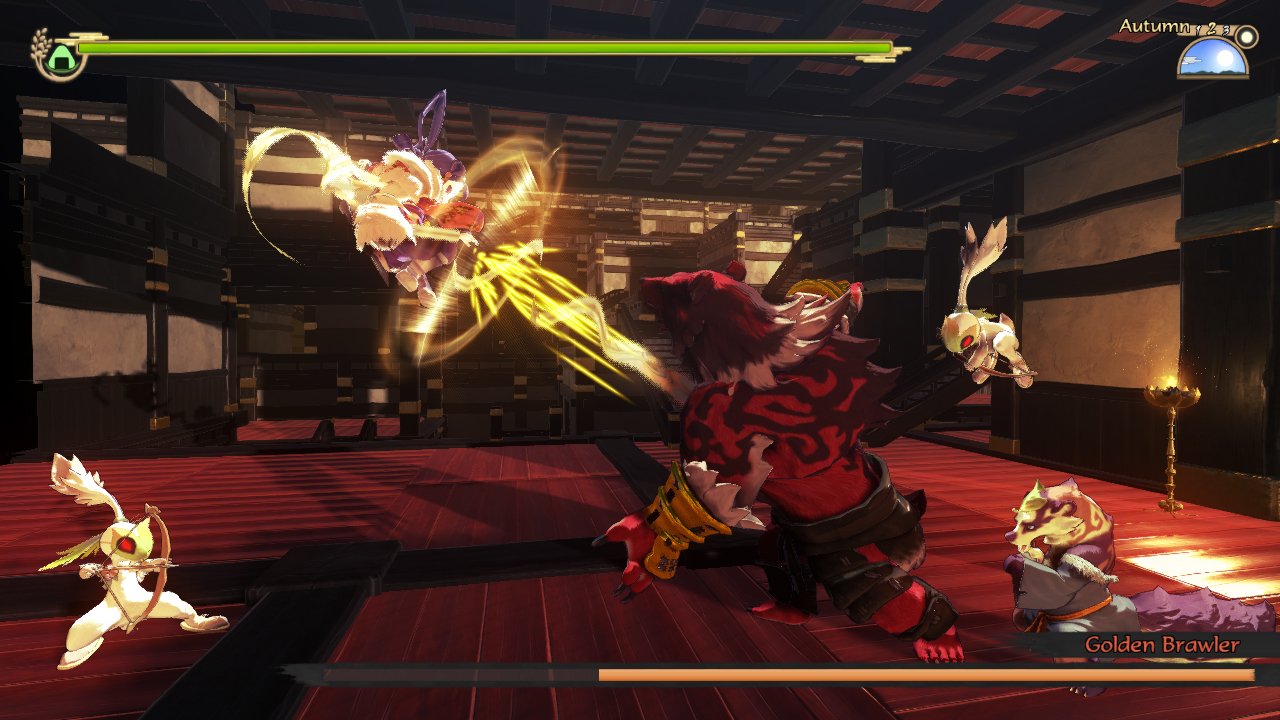 Beyond that tree, it’s easy to see Freesia‘s influence in Of Rice and Ruin. Both games feature mythical female protagonists and lightning-quick, combo-heavy combat. But for Sakuna, the developers set their sights even higher, aiming to make the action even more dynamic and unique. They’d need some sort of hook to drive home their vision for the title, and they found in Sakuna’s scarf.

That scarf, or what’s known as the “divine raiment” in the game, opens up a wide array of possibilities for combat and level traversal. Rather than limit their hero to simple blocks, dodges, and double jumps, Edelweiss gave Sakuna the ability to whip herself around her enemies and the stages at will using the power of her scarf. It’s a great concept, and it should be no surprise the inspiration for it came from a franchise that’s been influencing game designers for more than 30 years.

“The idea itself came from the hookshot in Zelda,” Nal said. “We had already refined the basic combo mechanics of the combat in our previous title Fairy Bloom Freesia, so I wanted to add a new pivotal element to expand on the existing system. A grappling hook that allowed the player to close distance or fly around enemies, pull enemies closer, or alter mid-air movements seemed like an interesting mechanic to achieve this goal.” 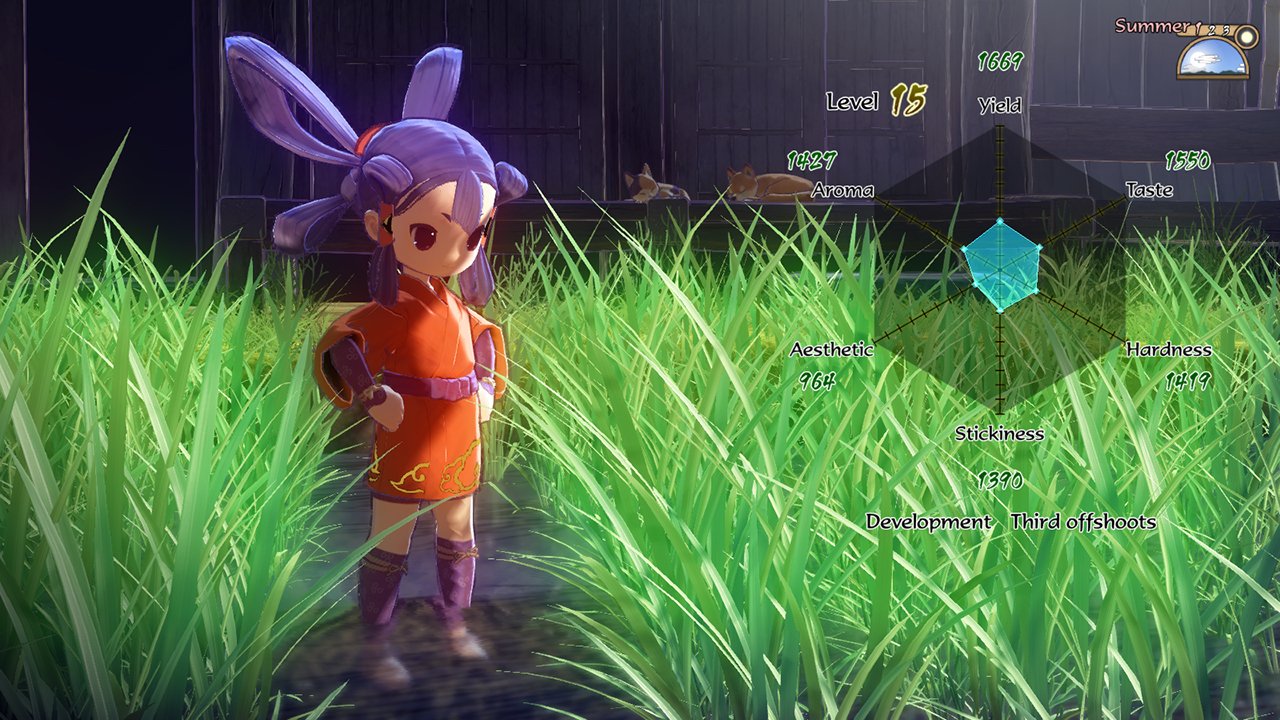 That action combat is all I’ve been able to experience in my sessions with Sakuna so far, and while it’s absolutely delicious, I think I might actually be more looking forward to tilling the rice paddies. The most recent trailer gave us our best look at the farming aspect yet, and compared to something like Story of Seasons, it looks pretty damn in-depth and accurate to real-life farming techniques. And that’s not an accident.

“We did actually grow rice ourselves and did fieldwork in faraway places,” Koichi explained. “All of the rice-growing elements ultimately needed to circle back to the action elements through Sakuna’s abilities. Because of this, the farm work in the game is comprised of ‘faithfully recreated,’ ‘based-on-reality,’ and ‘completely unreal’ elements that we chose and arranged to create the kind of gameplay that we were aiming for. When we studied real farm work, it was less to 100% accurately recreate that actual farm work in-game for its own sake, and more to determine how it should be implemented coherently within the game that we were making.”

We’ll know soon enough whether or not all that extra effort will be worth it. Sakuna: Of Rice and Ruin launches November 10 for Switch, PS4, and PC.