Spelunky by way of Macross…and Gundam

We’ve covered the “Spelunky by way of Macross” space shooting roguelike for a couple of years now and the follow-up from Skulls of the Shogun developer 17-bit is almost here, coming to PS4 August 4 and PC a few months down the line (regrettably, the Vita version was axed).

And despite this, despite it being playable at a number of different shows, the team managed to basically keep half of the game under wraps until just this week when 17-bit head Jake Kazdal stopped by my house to give a hands-on demo of Galak-Z‘s spaceship’s second mode, which is basically a Gundam. 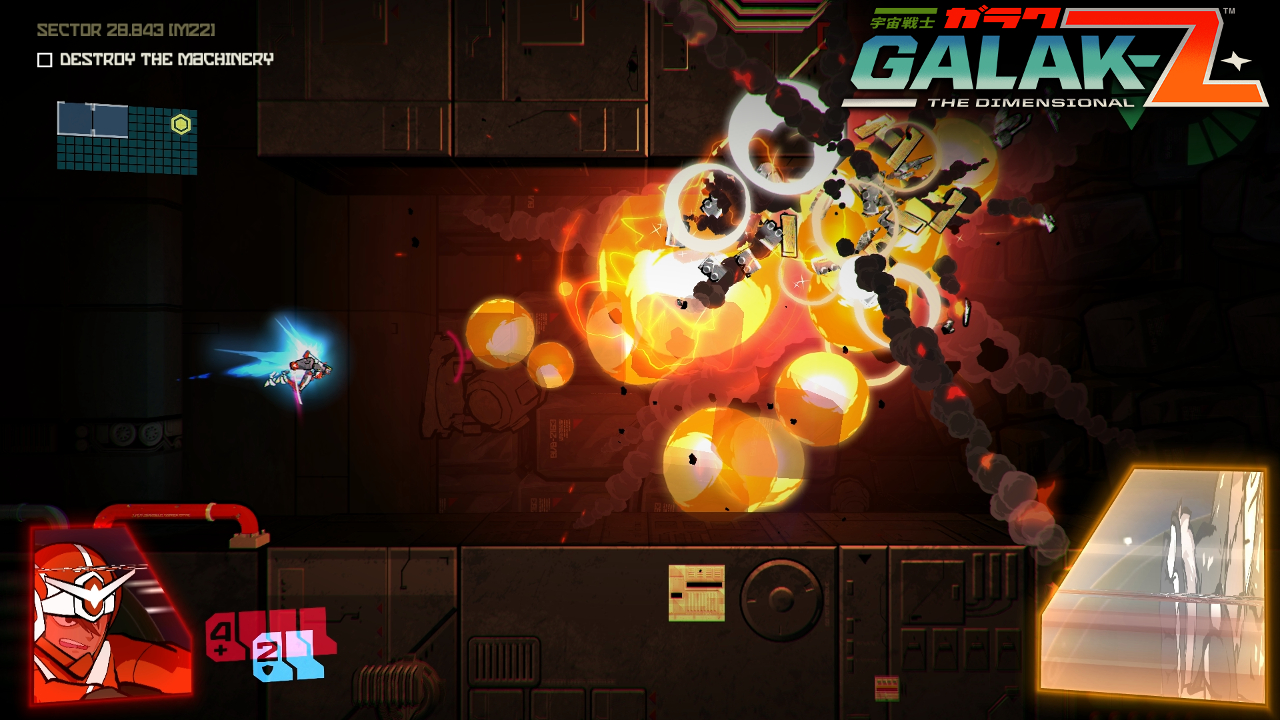 Let’s recap for a second if you haven’t been following along. Galak-Z is broken into five seasons each with five episodes. The fifth season will be added in for free post launch. This is one diversion from the typical roguelike set up, in that when you die, you don’t start all the way at the beginning of the game, but rather at the beginning of whichever “season” you’re on. “One of [Kazdal’s] pet peeves with roguelikes” is that playing very beginning segments over and over can get boring, so this blends that death-based need to replay with earned progression.

More typically, levels are randomly generated, and you get different fractions of story and dialogue every time. This way you won’t hear the same repeated bits death after death, but slowly glean more information until you finally get through the season.

The space shooting half we already knew about is not just a twin-stick shooter, either. The ship maps thrusters (and a boost) to the triggers. There’s also a backwards thruster so you can shoot and flee, a dodge thruster, and a a barrel roll (square) that juts the ship “toward” you like it’s coming out of the screen (and over incoming bullets on the 2D plane). You have your standard weapon and an Itano Circus missile salvo (limited, but you can buy more if you find the shop during levels).

You can morph the ship into the robot at any time with a smooth, Transformers-like animation and change up the playstyle completely. It has a beam sword, which can be charged for a stronger, wider attack, and a shield that has parry capabilities. Perhaps most fun, though, is the extending claw arm that can grab dangerous space junk and throw it at enemies, or grab enemies themselves, bringing them in close so you can start wailing on them with punches.

Keeping the mech locked up this long is impressive. The feature was locked off in the many public shows Galak-Z has been demoed at and no one slipped up about it. Kazdal tells me there were plans for a third, stealth-focused character, initially, but that it made for too many mental hoops in dealing with all the other things that could be happening at any given moment.

Galak-Z is smooth, feels great to play, and the mech is a welcomed addition, adding one more layer to the game. There are warring factions you can sometimes pit against each other, environmental hazards to be aware of (and sometimes use to your advantage — thanks alien trapdoor spider who saved my ass!), and instant shifts between ranged and close-quarters combat. It’s tough, gorgeous, encourages exploration (beyond mission goals, there are blueprints for new gear and other upgrades to find), and a ton of fun.