The Dead Space series features some of the grossest, most horrific creatures and scenes shown in gaming today. Visceral Games isn’t afraid to pull out all the stops when it comes to terrifying players with the Necromorphs, an alien entity that literally breaks bones and moves muscles around in whatever corpse it’s commandeered to create a new horrific form.

I went to visit Visceral Games recently and spoke with creative director Ben Want and art director Alex Muscat about how the team created new Necromorphs in order to keep the nightmare fresh for Dead Space 3. 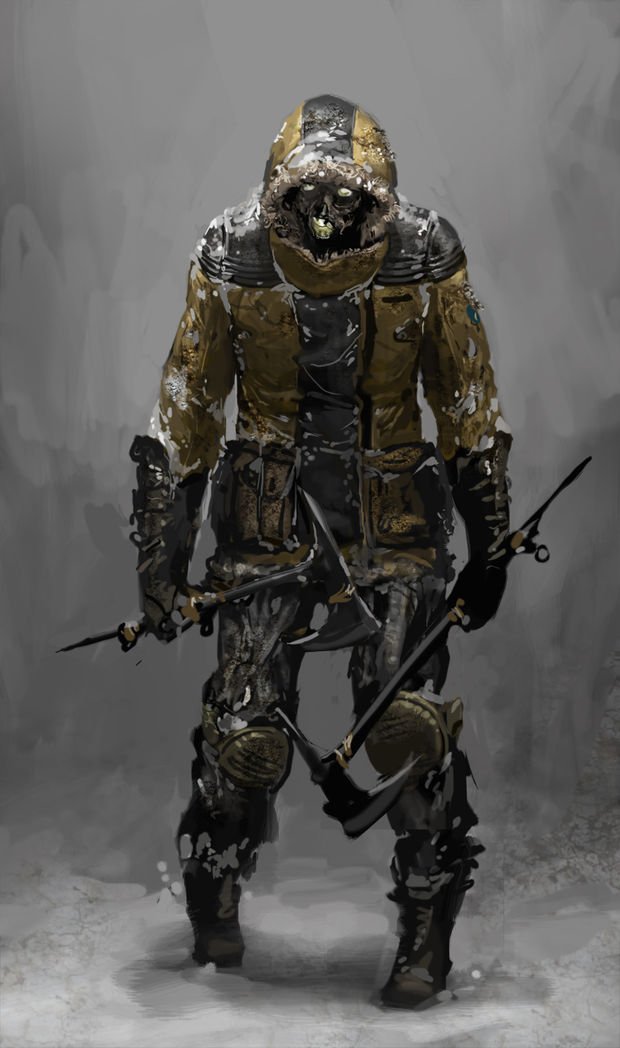 “So with those directions in mind I worked with a concept artist in LA, Brett Marting, who’s a really talented guy. He started to just kind of develop some ideas basically. I think he was originally going off the more of the alien feel, like what would be really ancient arcane alien kind of thing. So he did a bunch of key images that were interesting, and then at some point we started to gravitate towards this mummified look.”

Fodders are a new common form Necromorph that’s unique from past designs as they have the mummified look to them. The ice planet players will be exploring in Dead Space 3 was attacked by the Necromorphs long before the events of the original Dead Space, and you’ll be coming across these Fodders that have been dormant for centuries, hence the mummified look.

“So mummies are naturally pretty creepy in a different way then say the normal Necromorphs are where they’re kind of all guts and gore, and very fresh. I think it was a lot of fun to just explore what is freaky about mummies. They’re just really bizarre stretched faces and they just have a lot of interesting elements to them.”

The outside physical aspect of the Fodder is one part of the new creature. The team didn’t want to just create one basic repeated form, so you’ll be getting multiple variations of it depending on the corpse that’s used to create a new Necromorph.

That also extends to the type of weapon the Fodders will use. Yes, actual weapons, another first for Dead Space. There will be Fodders that use ice picks, fire axes, surgical saws, and so forth. While they are using melee weapons, it’s still pretty similar to fighting a Slasher. What’s striking about the Fodder compared to a Slasher, however, is what happens once you’ve dismembered it.

“At a certain point, we knew that we needed to develop the new baseline enemy,” Ben explained. “We’ve been using the Slasher for a couple of games as our main guy and we needed something as robust as that, but had a completely different dismemberment strategy. We started going back to paper and going ‘Okay, what do we want to see in this enemy? What would be the ideal version of it?’ We knew we wanted something that would transform so you would always be surprised no matter where you hit the enemy would react in a different way, and it would transform in a different way.

“With that in mind, we started just coming up with interesting forms that could evolve from a human being like if you had shot limbs off of it what would be the weirdest thing that could come out of it? The way the Fodder works is basically blow off its legs he’ll grow something down below and he’ll locomote in a completely different way. Shoot off his arms off and his whole top explodes, and something else happens.

“I love just long gangly things,” Ben continued. “I just think they’re naturally creepy so a lot of the initial concepts kind of echoed that. We knew that in its intact form we wanted this thing to be just a very intimating creepy figure. Just kind of an imposing thing that just wouldn’t say anything but looked human. You might see this thing swaying in the distance, looking at it and go ‘What the hell is going on?’ And then you realize too late that there’s actually a creature inside of it.” 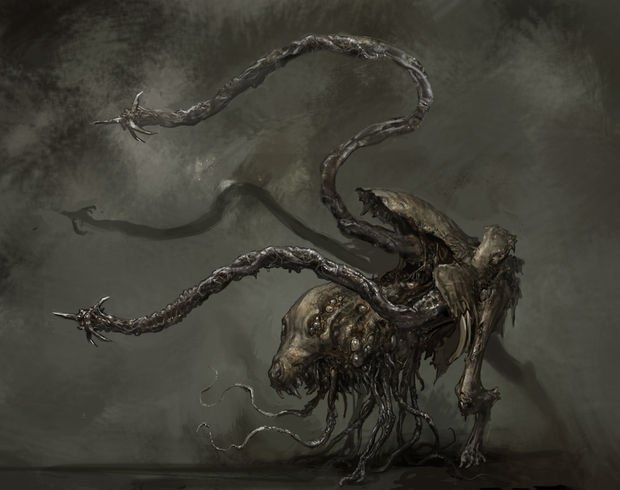 Another new enemy in Dead Space 3 are the updated Lurkers, Necromorph-infected dogs that are essentially the replacement of the baby and kid enemies from the last two games. No, they’re not getting rid of young hosts due to any controversy or the like. In fact, there were never any complaints about the fact you could stomp babies and kids to death. Go figure.

Rather, from a fiction standpoint, there were never any kids present in the world players will be exploring, but there were plenty of dogs. “They’re kind of like sled dogs,” Ben told me. “But they would use them for digging for artifacts, kind of like how you would have in an earthquake scenario where you have dogs trained to seek things out.

“That was the idea behind [the new Lurker], what would a dog version of that creature be? We tried a bunch of different things, some of them were less dog-like than others. But I really wanted to have a little bit of a dog identity to it so we ended up with something a lot more like this. It’s just this really dissected and deformed canine.”

The design is loosely based on a rottweiler, and other canine breeds you’d associate with finding things. Continuing with the fiction, the dogs that were taken with humans in space were on the small scale, as it’s tougher to keep a larger dog contained on a spaceship. And like the original Lurkers, you can expect these news ones to shoot out long, menacing tentacles.

One of the bigger creatures in Dead Space 3 is the Nexus. You first saw this creature in action at the end of the E3 demo, where the battle finished with the Nexus sucking up and swallowing players whole. Art director Alex Muscat described the process of creating this beast that went through 30 iterations before they settled on the final look.

“What we usually do is start off with something really loose, just a really vague idea. Then somebody will sketch something out and it will look like weird blobulous kind of thing. The second idea is well okay what is scary? Sometimes we try to get inspiration from things that we already know are terrifying. Insects and bugs are pretty gross to a lot of people. If you actually look at the Nexus it almost looks like some sort of insect.

“Visually we have some basic framework there that’s going on, and then we’ll sketch something out. Then we’ll start refining it over time. One of the things we do is we’ll start adding some of our look to the enemies. One of the themes we have in our games is ribbing [that] adds that element of scariness and grossness to it. We have this idea of open carcasses, the rib cage — you can actually see on the Nexus when he opens up his chest and his ribs and guts are exposed. We have that theme throughout all of Dead Space.” 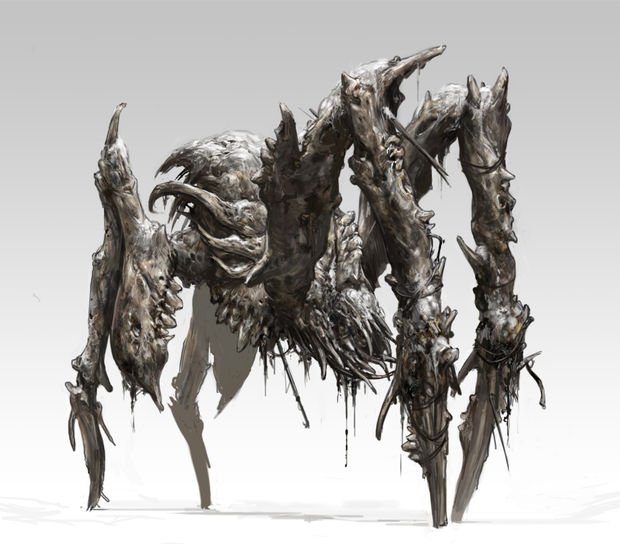 Slasher, Fodders, Nexus, Lurkers — there’s a ton of new enemies and a lot of returning ones that have all been rebooted. There are so many enemy types now that Dead Space 3 offers the most enemy variety of any of the past games. Creating so many creatures is no easy task, due to technical limitations, and some other factors.

“We tried all kinds of different stuff for the different forms that we create,” Ben told me. “A lot of this ends up you write some stuff on paper and then you go and you match that up to your document and you try and figure out which one of these concepts is going to best convey the different states that you need to have for the creature. A lot of times the concepts will inform the designs. So the designers will see something and go ‘Oh my god, that looks so cool! Can we make that happen?’ and we’ll come up with gameplay out of the concept.

“It’s kind of a mix and match. And then we usually we do a culling pass where engineering gets involved and they go ‘Okay, you can’t have 20 tentacles coming out of this thing cause we just can’t render that.’ And you start honing things down and trying to figure out what’s going to be the most effective use of the asset. We knew with the Fodder we wanted to have as many of them on screen as possible just to make them a challenge, and we had to at least be able to support the same number of them on screen as we had with the Slasher. It was a balancing act of ‘Do you really want this feature or do you want a whole bunch of them able to mob the player?’ There’s always that tradeoff but I think in the end, we ended up with a good mix of it.

“It’s always a challenge for every enemy to try and come up with something unique about them, something memorable,” Ben told me. “You want each enemy to leave a lasting impression on the players. Not only so they remember what kind of enemy it is so they know what strategy to use, but just so that it’s marked on their brain. That’s part of the horror aspect of it, just finding things that psychologically resonate with people as freaky.” 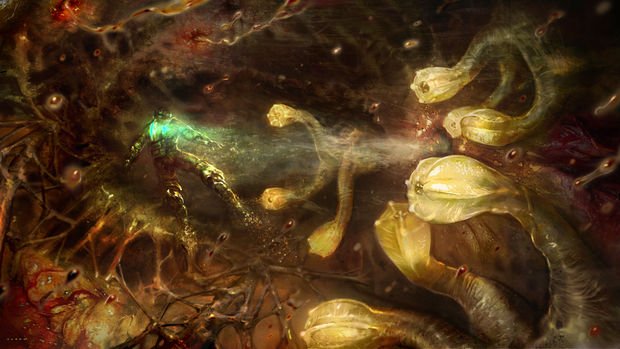 Dead Space 3 will be out on February 5, 2013 for the Xbox 360, PlayStation 3, and PC. Check out our Dead Space page to see everything you need to know about the new horror title.