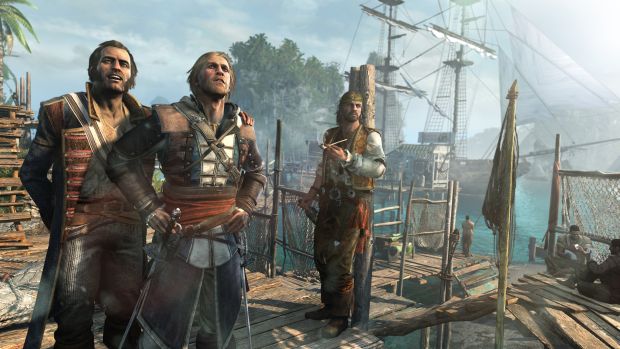 We’ve talked a lot about Assassin’s Creed IV over the year, and it’s not much longer now until the full game is released for all the major platforms. There’s a ton of new stuff, so what’s director on Black Flag Ashraf Ismail’s favorite feature out of all of it?

“I absolutely love the world structure that we have,” Ashraf told me. “I don’t know if you even noticed it, but effectively we have this hub, which is the naval, the ocean, and in the ocean we have these pockets of maps. Islands, caves, forts, cities, and I feel like it’s an really awesome way to consume content as a player.

“That you’re in this place, you’re sailing your ship, and then you get to an island. And the island, you know, it’s not huge, but it’s big enough that you know you can spend a good hour there consuming all the content, find all the collectibles, find the treasure chests, find cargo, do whatever hunting that you need to do, [etc].

“[Then] when you leave, it’s kind of like you hit a reset button and now you’re going to look for something new. You’re going to see new art, new content, and there’s going to be a new purpose to go into that place.”

Ashraf told me he feels that what they’ve done in Black Flag is the best way to create an open-world game, expressing pride for the team at Ubisoft in achieving all of the diversity and content in the world. The entire system has a lot of similarities to the Nintendo 64’s first Mario game in fact.

“The best reference I can say for this is this is effectively like Mario 64. Think about it. You have the castle, which is the ocean [in ACIV], and you have these portals that take you to these really unique worlds where you can come back to these worlds and do a bunch of things. Do collectibles, find stuff that has value for you. That’s effectively what it is, but we’ve taken a much more credible approach to it, obviously.

Ashraf noted that Mario 64 was a massive reference and that it’s one of his favorite games of all time. “This was the world we decided to build. We wanted a hub world with pockets of maps and it’s really different for [Assassin’s Creed].”