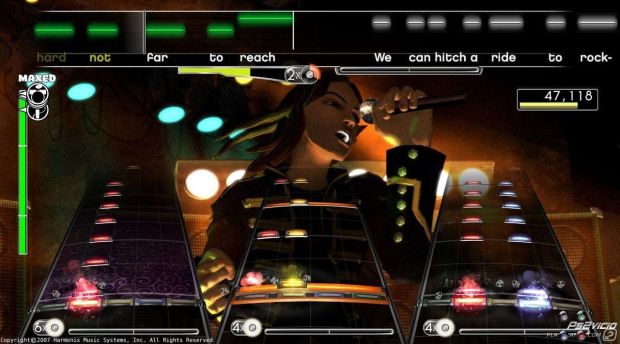 Why would a non-video gamer (and a professional drummer nonetheless) contribute an article to a game blog? To uncover the answer to this, let’s travel back in time about three years ago, when the first Rock Band game arrived.

In the August 2008 edition of Modern Drummer Magazine, I reported that one of my teenage drum students, Amanda, appeared at her weekly lesson with dramatic improvement in her hand/stick technique. After discovering that she had been playing Rock Band feverishly for many weeks, I decided to give Amanda an unusual drum lesson assignment. I told her to play Rock Band and practice “Say it Ain’t So” by Weezer until she mastered the song at an Expert Level.

When Amanda came in for her next lesson, I had placed in front of her a note-for-note transcription (often referred to as a drum score or drum chart) of the same song on a music stand. This was to see if Amanda’s mastery within Rock Band applied to reading and playing drumset music. To my amazement, she was able to assimilate this material much faster than any other method that we had tried.

Amanda then offered me a wise suggestion. She told me to use colored markers to highlight the noteheads in the chart. The highlighted notes would correspond to the colors found in Rock Band’s scrolling note chart and drum controller. This turned out to be an important piece to the puzzle for Amanda. Her confidence grew each lesson as she was able to draw upon her knowledge from the game to learn how to play the drums. I was so excited about this new teaching tool that I bought an Xbox 360 (and the game) to see for myself what this phenomena was all about.

I had fun playing Rock Band; I especially liked the positive feedback from the faux audience and the dynamic rock and roll graphics. However, I have to admit I was slightly annoyed by the plastic drum pads and unstable kick pedal. The scrolling note chart looked really cool, but made it especially hard to recognize complex rhythmic patterns.

Something about the Rock Band note chart did strike an especially familiar tone to me. After some experimentation, I suddenly realized why Amanda found it so easy to read the color-coded drumset music. With only a few alterations, Rock Band’s scrolling note charts could easily be transformed into standard drum notation. 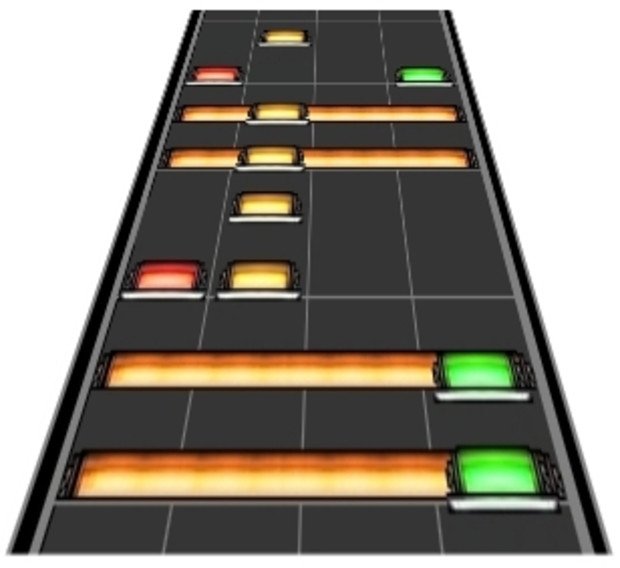 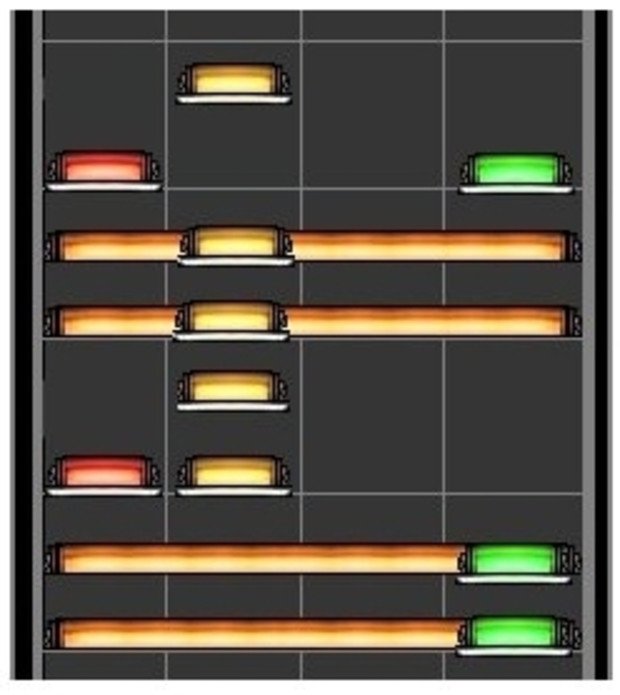 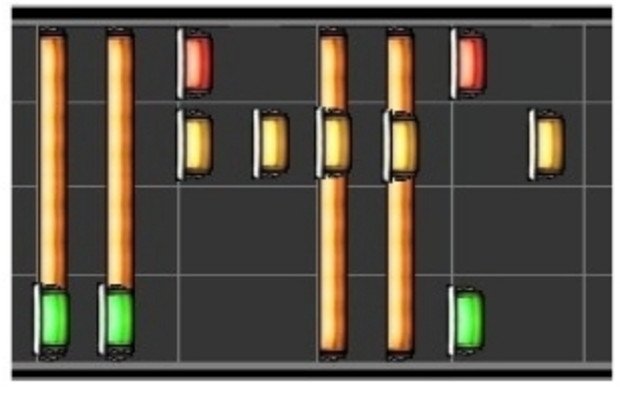 A white background replaces the black one, and the note positions are changed, now reflecting the positions of or relative pitches of the parts of an acoustic/electronic drumset. 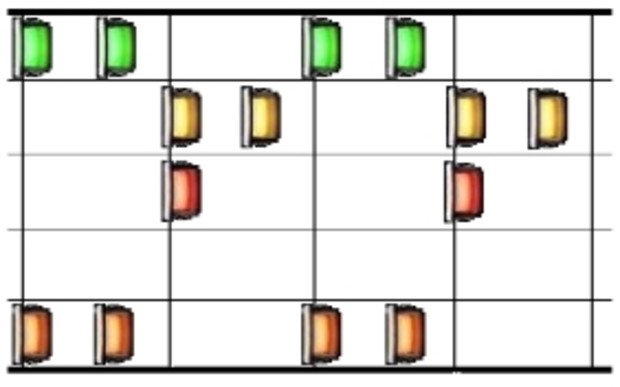 Notehead shapes now differentiate between drums and cymbals (regular noteheads and X’s).
Beams clearly define rhythms, stems serve to connect the noteheads, and the full staff (lines and spaces) is used for easier separation of notes. 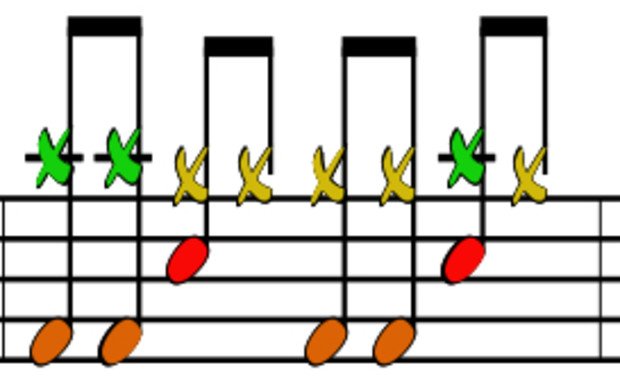 The four levels of difficulty in Rock Band make for an ideal for drum method. The Easy Level requires very little coordination from the player, while the Hard and Expert Levels demand increased coordination. Also, because the Expert Level is, for the most part, a note-for-note transcription of the actual drum part, it allows the learner to get inside the style of each drummer that they are imitating. This is a powerful way to begin to forge your own musical style.

The following colored drum notation examples are plucked from the bridge of Vasoline by Stone Temple Pilots.

I believe that stationary, colored drum notation, as I’ve presented here, is the missing link. It bridges the gap between playing a game and learning how to play the drums. As useful as this tool is, however, it isn’t enough to turn Rock Banders into would-be rock stars. Gamers would be best served to follow these steps:

• Use Rock Band to its fullest educational potential. Practice mode (in each version of the game) plus the Tutorial Mode in the first game, the Drum Trainer mode in Rock Band 2 and Green Day Rock Band, and the “Drum Lessons’ and “Beatle Beats” in The Beatles Rock Band are all extremely well done and provide plenty of practical tips and practice opportunities. Recently, for Rock Band 3, Harmonix has enlisted the help of the Berkley College of Music to make lessons that go along with 60 to 80 songs as part of the Drum Trainer.

• Consider buying some of the add-ons that make the Rock Band playing experience even more realistic. For instance, Mad Catz makes an expansion pack that plugs into the controller from Rock Band 2 (and beyond). It allows for up to three additional cymbals and an additional pedal for double bass drum playing. The Ion Rocker (by Alesis) is a premium drum set controller that doubles as a real electronic kit with the addition of a drum brain.

• If you don’t own an Ion Rocker, then you will need to buy an acoustic or electronic drumset.

• Hire a qualified drum instructor. Your teacher will most probably recommend additional books, DVD’s, etc., that will help you learn drumming basics.

• Purchase a music stand so that you can put the drum charts off to the side while playing the Rock Band drum controller or the real drumset.

• Join a drummer’s website such as Drummer Café and/or subscribe to a drummer magazine such as Modern Drummer.

What I’ve offered here is a fairly low-tech answer to a high-tech question. This makes sense, because, in my opinion, old-fashioned methods will always play a part in learning musical instruments. One-on-one human interaction between a teacher and student, especially when you have the correct teaching tool in place, is priceless. However, the ultimate on-the-job training will only take place when you join your first band and begin to rock out with your bandmates.

I hope to see you out there on a real rock and roll stage!

Andy Ziker is a drum instructor and free-lance performer in the Phoenix area. Besides authoring several several instructional books, he has written articles for Modern Drummer Magazine and the Drummer Café website. Unofficial colored drumcharts transcribed from Rock Band are available on www.andyziker.com.