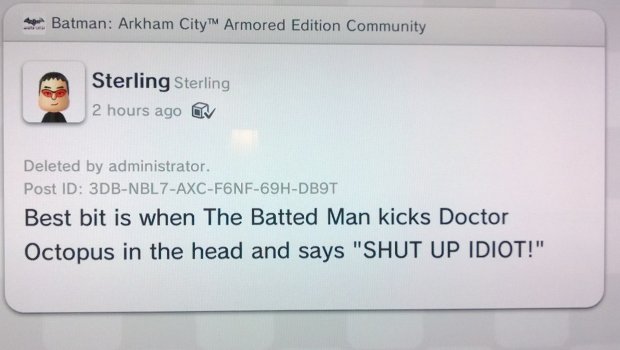 The (possibly) first person to be modded on Miiverse speaks out!

[Update: It seems Nintendo has given the deleted post in question further review and decided that it was okay.

“We have checked the reported content and determined that it is not in violation of the Miiverse Code of Conduct,” reads the notification sent via Miiverse. “The content has been reposted, and all restrictions have been lifted.”

Perhaps this means reported content is automatically removed, to be reviewed later? Or maybe the pressure from the oppressed proletariat moved the powers into action! Who knows? All I know is, I’m drinking the sweet fluid of freedom. Freedom Fluid!]

Look at the image above. What do you see? You should see a very accurate review of Batman: Arkham City that I posted to the Armored Edition community on Miiverse, the social networking feature found on the newly launched Wii U.

A review that, it turns out, is too risque for the likes of Nintendo and its stringent administration policies. Like the Eye of Sauron, it casts its steely gaze down on our Miiverse postings, responding to reports of misconduct with swift retribution. How swift? Well, the admins deleted my above post before the system was even sold to the public — within two hours of its appearance, in fact.

Your humble narrator may now hold the dubious honor of being Miiverse’s first ever moderated user, his post having been removed for that Nintendo calls, “Violent Content.” Violent content. In a community for a game in which arms are broken, people are shot, and Catwoman is called a “bitch” roughly ten thousand times.

Is this Obama’s America? Is this the police state we have signed up for? Oh Nintendo, your oppression knows no bounds. I AM NOT A NUMBER, NINTENDO! I AM A MAN!

But hey, now we know exactly how moderated Miiverse is going to be.