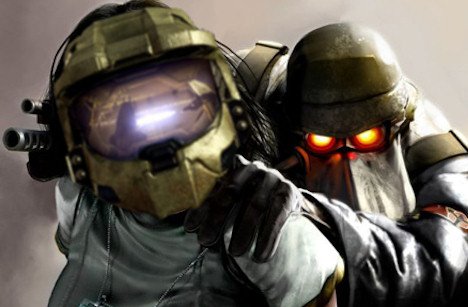 Killzone 2 launched exclusively for the PlayStation 3 this Friday, generating much bias from biased people who are biased. It also sold quite a few copies and has been setting the PlayStation Network afire with grenade spam and shotgun rampages. It is a great game.

It is also blatantly better than Halo 3.

Because one good thing cannot exist in this world without something else being absolutely rubbish, we present our concise and thoughtful argument explaining exactly how Killzone 2 is blatantly better than Halo 3. 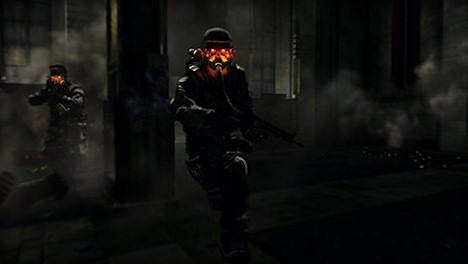 Sean Pertwee is in it:

Any game with Sean Pertwee in it is better than any game without. By this token, Primal is also far superior to Halo 3, as are the original Killzone and Warhammer 40,000: Fire Warrior. Every multiplayer game needs Sean Pertwee’s rasping Englishness barking orders through a gas mask, and if you disagree then you are obviously a casual gamer, which is why you love Halo so much. Halo players are so stupid.

Sean Pertwee was in Event Horizon, which is the best film ever made about a space ship and starring a man who played Merlin. His appearance makes everything better. Better than Halo 3, at least.

You can throw blood packs:

I shouldn’t really have to explain this one, but since you probably play Halo 3 and are therefore a moron, I suppose I’ll lower myself to speaking like a grade school teacher. In Killzone 2‘s multiplayer, there’s a class system, and you can choose to be a Medic. If you level up the Medic enough, you gain the ability to throw blood packs on the floor and walk over them to quickly regain health. This is fantastic.

Throwing blood packs on the floor and stamping on them to suck the blood up through your boots is more realistic than some magic white box with a red cross on it like inferior FPSes have. I in fact saw a man recover from getting shot in the stomach because doctors pushed blood up through the soles of his feet. He looked at me when they did it, which proves it happened.

The main character is a midget:

A few people have whined and complained that the camera angle of Killzone 2 seems to indicate that the main character, Sgt. Sev Betterthanhalo, is some sort of midget. It’s really held low to the ground and you need to look up to see any of the characters. Obviously the only people who complain about that are whiny Microshitting Fagtart fanboys who are trying to protect their precious Halo 3, which is not as good as Killzone 2. Their bad journalism and bias disgusts me.

The reason why the camera angle is so low is because Guerrilla Games is trying to demonstrate that those of smaller stature still have a valuable contribution to society, since they can be trained into heartless killing machines and used to defend our planet. This is possible because their experience as social pariahs has allowed them to dehumanize themselves to great degrees, allowing them to end another person’s life with cold-blooded and ruthless efficiency.

Compare that to Halo 3‘s bigoted anti-midget stance and I think you’ll agree that Killzone 2 comes out on top every time. This shameless glorification of the tall needs to end. 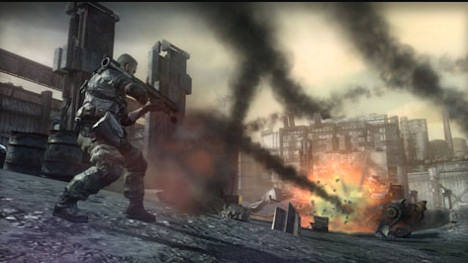 You can bring people to life with a zappy gun:

Again, this has received some criticism from casual frat boy Xbox Live gamers who don’t even own a PS3 so they don’t know what they’re talking about, but in Killzone 2 you can bring downed allies back to life by shooting them with a magical zappy gun that heals all their wounds. Some “people” have a problem with this.

The magical zappy gun of eternal life is better than anything in Halo 3 because it gives us hope for the future. It tells us that if we work hard enough, we too may unlock the secrets of eternal life with a cheap-looking gun that shoots static electricity, and that’s a better message to kids than “one day religious aliens will probably kill us all and there is no God,” which is what Halo 3 definitely says.

You may think that allowing 32 players to simultaneously talk on their headsets in a game lobby would generate an obnoxiously loud cacophony of indecipherable and excruciating gibberish interspersed with the phrase “Helghast nigga,” and you’d be right — if you’re an IDIOT!

32-player voice chat works because it’s a metaphorical and scathing satire on the reality of war. War is, in and of itself, a painful mess of miscommunication and a breakdown of human sensibility. War is unintelligible and illogical, something that cannot be understood by man, especially those stuck doing the fighting. A far cry from Halo 3‘s obnoxiously shallow premise of “War is great,” Killzone 2 is a deep game with a morally relevant message for our times. Those who say Killzone 2 has no story obviously missed the whole point. 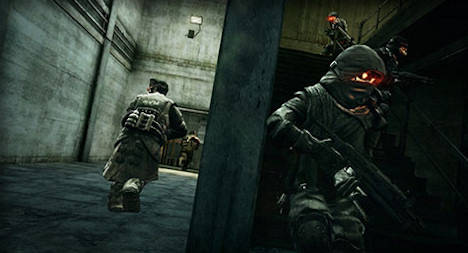 Master Chief is a pedophile:

While this is never explicitly mentioned in Halo 3, Bungie has since confirmed that, like Dumbledore in Harry Potter, Master Chief is a pedophile. We don’t have a link to where Bungie said this, but Bungie definitely said it, which is the point. There aren’t any pedophiles in Killzone 2, and if there were, they would not be portrayed as heroes like Bungie’s man/boy-love propaganda, Halo 3. You’d get to shoot them instead, which is better.

“Master Chief is a pedophile,” we think Bungie probably said once. “He is one. We even drew some pictures of him doing it, and that means he is one.”

This would also explain why 100% of the people who play Halo 3 are, without exception, gay pedophiles. Meanwhile, Killzone 2 players have lots of sex with adult women, except for the two women who play it, who can’t be pedophiles anyway because there’s no such thing as a girl pedo. 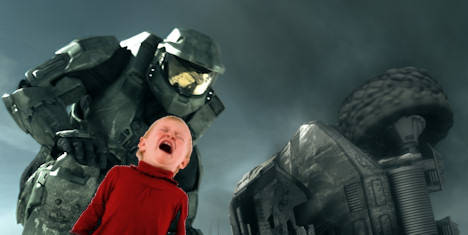 The controls are superior:

First of all, everybody knows that the Xbox 360 controller is shit, worse than even PC controls, which are notoriously horrible for shooting games. The PS3 Sixaxis Dual Analog Next Gen Interactive Hand Device 3 is the definitive way to enjoy an FPS, and anybody who says otherwise is an Al-Qaeda sympathizer.

A few total nobody imbeciles have moaned like bitches that the controls are too hard for their clueless Halo-loving minds to comprehend, and that there is too much sluggish lag because they can’t understand actual tactics in a game. Yes, it’s not just jumping around firing Spartan Needlers and driving in Pumbaas, pal! Killzone 2‘s controls are better because of reasons, and you can’t argue with reasons.

Also, it would be a crime for me to not point out the realism of the controls, which makes Killzone 2 a way more immersive game than Master Chief’s Stupid Adventure Which Isn’t Very Immersive Actually. Just ask any real-life soldier who has fought in a real-life war. He’ll tell you that Killzone 2 is just like an actual conflict. Real soldiers have to wait a second to turn around after pushing their left analog stick, and Guerrilla has captured that perfectly.

Killzone 2 is obviously better because I like it, and if I like it then that means Halo 3 sucks and anybody who likes it is wrong.

So there you have it, we have proven with facts that Killzone 2 is better than Halo 3. If you choose to disagree with the completely irrefutable argument presented, then you are literally a moron. Now fuck off, I need to go play Doom.