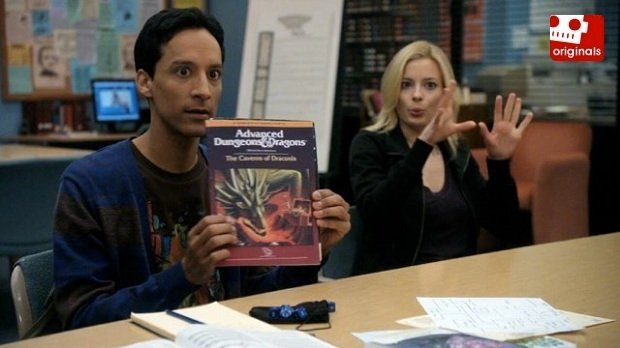 I love role-playing. I like being a half-elf, half-demon on a bloody rampage; I like being a sci-fi ex-black ops badass on a quest to rescue his daughter; I love being a naughty schoolgir — wait, sorry — wrong kind of role-playing. What’s funny is that the more I play tabletop role-playing games like Dungeons & Dragons, Pathfinder, CthulhuTech, or Ironclaw, the more I appreciate the influence such systems have on the games we display on our televisions.

It could be said I first got into gaming when I was very young (around 5 or 6) and my brothers would play their fancy schmancy NES and Genesis while I was around. I would whine that I wanted to play too, and sometimes of their own accord, sometimes of divine, parental intervention, I would be allowed a controller. I’d say I became a gamer at age 10, with Metal Gear Solid, as I would spend evenings either playing it, drawing characters, or writing out my wonderful fifth grade screenplay adaptation.

But it wasn’t until age 20 that I was introduced to tabletop role-playing. I would hang out with my friends and do homework while they gathered around a table and rolled dice. I asked them what they were doing, and how to play. Soon enough, I was right back to age 6, begging to give it a try.

I had played Baldur’s Gate on PC when it first came out, in an age of CRT display iMacs with handles embedded in their neon-colored plastic cases. I loved it, but I never realized how much the game was a translation of D&D 2nd edition rules, or that it took place in an official D&D setting. When my friends finally had an opening in their role-playing group, it was decided the next campaign would take place in Forgotten Realms, along the coast, just north of, yes, Baldur’s Gate.

“Wait a minute,” I said. “They took the game from however long ago and made it into this?” The group looked at me as though I had just asked what inning the Super Bowl was in, and how many free throws the Green Bay Packers needed to beat the Calgary Flames. It was kindly explained to me that the legacy of D&D traces back far, far earlier than any digital video game, and that Baldur’s Gate the game was in fact based on Forgotten Realms, not the other way around.

I sunk my teeth into Dungeons & Dragons like I never had any of my other hobbies. I read every book on my friend’s shelf. I learned all I could about the rules and creatures and magic and items. My first character was a Fey’Ri rogue/sorcerer combo, and to this day I often use her name for avatars or screen names on forums. No luck on the Xbox LIVE gamertag though. Boo.

Soon, D&D wasn’t enough. I learned there were all manner of role-playing systems, including the often-mocked live-action role-playing game, such as World of Darkness. A professional at Iowa State University and personal friend turned out to be not just an avid player of Vampire: The Masquerade, but the local prince of vampires. He gave me a taste of his Camarilla persona, and I was legitimately terrified. Make fun of LARP-ing all you want, but that shit was scary.

I bought my own map, my own books, my own dice. I sketched out characters. I was neck-deep and loving it. The funny thing is, the more absorbed I became in tabletop, the more I recognized the legacy of D&D in modern systems and games. Skyrim may have a collision detection method of combat, but hit points and mana points are still there. Knights of the Old Republic was governed by D&D 3rd edition rules, and it’s considered one of the best roleplaying games of all time. Guild Wars 2 is a huge step forward for MMOs, but you’re still basically targeting a creature’s AC and utilizing abilities, much as you would in a tabletop system.

Not only that, but my deeper connection and understanding of tabletop led me to a deeper understanding of gamer and nerd culture. Believe it or not, some nerds just aren’t as into video games as you or I. They might prefer pen and paper role-playing, LARP-ing, comic books, or television. If you only have one thing to connect on and the other person doesn’t share that interest, you’ve lost an opportunity to learn and grow. Now that I could talk D&D, I could meet new people and share new interests, learn new things.

Getting into tabletop gaming fostered my creativity. Jesse Plumb, the same friend who introduced me to Forgotten Realms revealed that he had been working on his own setting, called StarBlazer. StarBlazer was every sci-fi trope and nerd fantasy come true, slammed together and put together to form a coherent whole. The Empire? They’re around. Xenomophs? They’ve got stats. Grammaton Clerics? They’re a base class. Samus’ Varia Suit? It’s wearable.

StarBlazer symbolized the cycle of creativity: It took two things my friend loved, role-playing and nerd culture, and created something fresh, with its own classes, rules, and systems. Dungeons & Dragons likewise took from Tolkien, Lewis Carroll, Poul Anderson, even the Bible and television show Kolchak: The Night Stalker. Now I’ve tried my hand at creation, with my own base class based on Naked Snake, designed to fit within Pathfinder rules. (Warning: It’s incredibly unbalanced, I know. Like I said: first attempt.)

But why tell you all this? For one, I hope you can learn as I did to appreciate things you may not have tried before, and seek out those new experiences. We’re not just gamers, we’re part of a culture, and that culture intersects at so many crossroads and waypoints along the way it behooves you to learn as much as you can. Second, there is a film being made about Gary Gygax and the legacy he created with D&D, and I’d like your eyes turned to them for a moment. The D&D documentary Kickstarter just closed last weekend, and they just barely met their goal.

I want to see these men and projects like these supported. I want more people to see Dungeons & Dragons and tabletop role-playing as I have come to see it: as a wonderful influence on even our most modern gaming experiences, one we too often take for granted. I want people to see things the way I’ve seen them and then be inspired. Are you excited for Bioshock Infinite? Do you love Borderlands 2? Name the game, and it can be translated to the tabletop medium. All you have to do is try. At the very worst, you fail and wasted some of your time.

But you did it trying to create something, and it will have given you a new perspective on this little hobby of ours we call gaming. Whether our controllers are handheld constructions or a combination of dice and paper, we’re all gamers.