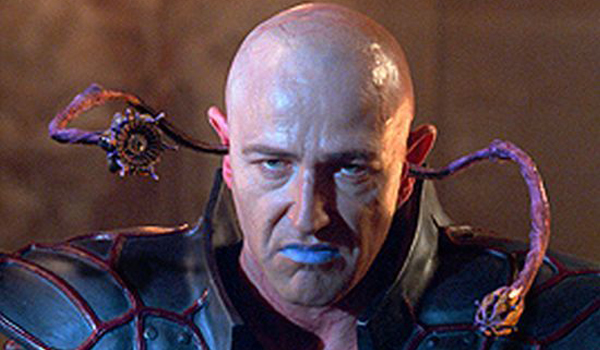 [Dtoid community blogger RedHeadPeak gives us part 3 of his look into the historical accuracy of the Witcher. These are so much fun!  Want to see your own writing appear on the front page? Go write something! –Occams Electric Toothbrush]

Compared to other RPGs I’ve played, The Witcher is a very intimate game. Even counting the segments of the city of Vizima as separate locations, the list of places I’ve seen so far is very small. The cast of the game is also quite lean. Both of these conditions are hardly negatives; it gives a feeling of familiarity and makes the interactions more personal. It also helps to enrich the story, in my opinion at least.

This intimate setup has impacted on my observations. Whilst with Skyrim I could skip about, cherry picking historic details, this games narrower landscape has led me to make a more specific consideration of the world. 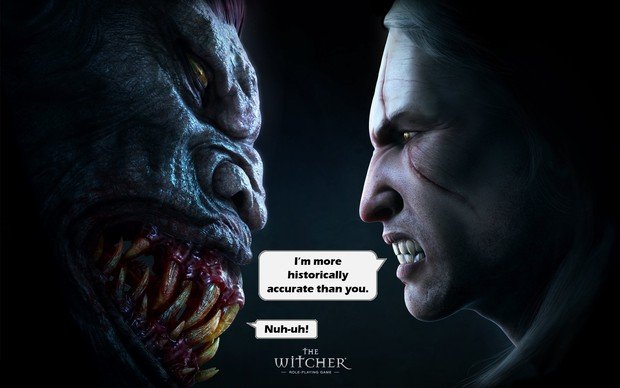 In the third instalment of my ‘grown-up’ look at the historical accuracy of this fantasy adventure game, I’ve picked out one feature of the main character and two features of the city to analyse. The field of discussion is quite specific, though the history addressed is quite varied. Let’s start with a piece of history that has had one foot in fantasy for a long time.

I’ve often seen Alchemy as the uncle, rather than the father, of Science. Science looked up to Alchemy in its early years. Most people thought Alchemy was strange or even dangerous. However, Alchemy always said its work was based in the ‘good magic’ found in the physical world, rather than the ‘dark magic’ witches gain from unholy alliances.

Alchemy inspired Science to try new things, but its parents kept it more grounded. Science would use the clear, conical flasks developed by Alchemy, and borrowed various other techniques but would stay grounded in the pursuit of knowledge. Once Science was a little older, it came to realise just how kooky Alchemy was. The quests to turn lead into gold, and the creation of the Philosophers’ Stone and Elixir of Life led Science to mock and chastise their older counterpart. Modern Science owes a great deal to Alchemy, though it doesn’t like to admit it. 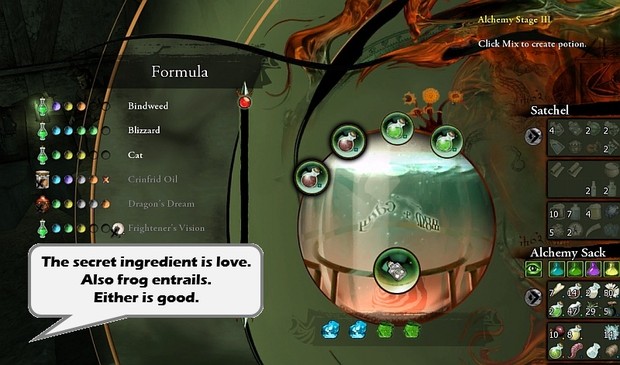 Going back and forth from marshes to city and back again, I’ve had lots of time to try out Geralt’s alchemy skills. Alchemy is a broad and elusive topic, of which I only have a rudimentary grasp, but the references to the craft in The Witcher have elements of reality. Geralt himself makes snide remarks in reference to Alchemists who waste time searching for the Philosopher’s Stone. The basic elements of Alchemy in the game are natural chemicals from animals or plants, a suitable flask over a flame, and meditation. Given that real world alchemy is a combination of basic chemistry, magic and deep spirituality, The Witcher gives a decent (if oversimplified) representation of the practice.

Whilst I have yet to make bombs in the game, I know from ingredients in my inventory that I will have that ability. Real life Alchemy in the Far East is often accredited with the discovery and perfection of gunpowder. Another bi-product of attempts to transmute basic materials was the creation of liquor, which is complimented by the use of alcohol in alchemy in the The Witcher.Given that the Elixir of Life was one of the grander goals of historic alchemy, it makes sense that the game has you making restorative potions.

I didn’t have the best first impressions of the first major city in The Witcher. It has nothing to do with historical accuracy; it’s hard to warm to a location when you start off in its sewers…

Whilst these tunnels make an awesome, eerie place for battling ghouls, the existence of such incredibly developed, expansive sewers is an oddity. Sewer networks like these are commonplace in fantasy – huge portions of role-playing campaigns can take place inside nests of sludge-filled corridors – but throughout history the man-made sewer is a rarer thing. 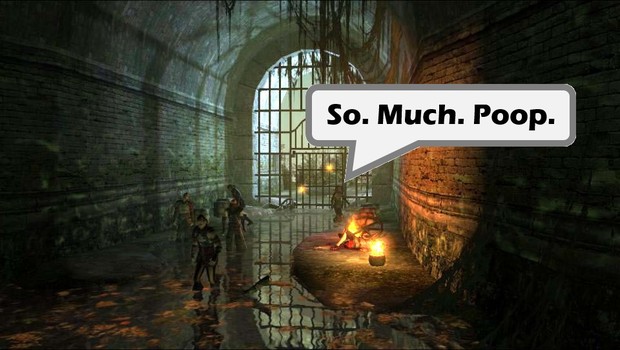 The inclusion of large, underground sewers is not just an historic discrepancy, but a conceptual one. We as modern peoples rely on sewers to take our leavings away, for our convenience and our hygiene. We also rely on sewers to take away the waste water away from our daily cleaning rituals. But medieval homes (and the historically inspired homesteads in The Witcher) have very little room for hygiene. Even the homes of the rich and powerful in fiction/reality have very little need for a gigantic sewer beneath them. People from the middle ages did wash quite regularly (the Elizabeth I once-a-year bathing thing is a myth) but the average city would be devoid of such an elaborate sanitation network.

Sewers existed, and had existed for centuries before the era that The Witcher is partly motivated by. The Romans are as famous for their advance stone waterways as they are for continental domination. The ancient Roman sewer is a more modest contraption than the tunnels from most fantasy games, but they were usually wide enough for a person to clear any pesky blockages.

Even the grandest, most famous cities went without proper sewerage for a very long time. Paris for example relied on natural rivers and streams to take waste away. In the fourteenth century, drains were added to the road and a basic ring sewer system was added to one part of the city, but that was mainly there to deal with rain water. The leaders of the city outright refused to improve the sewers in the 1700’s, despite the excellent advice of local scientists. It wasn’t until the 18th century that Napoleon III cleaned the place up. 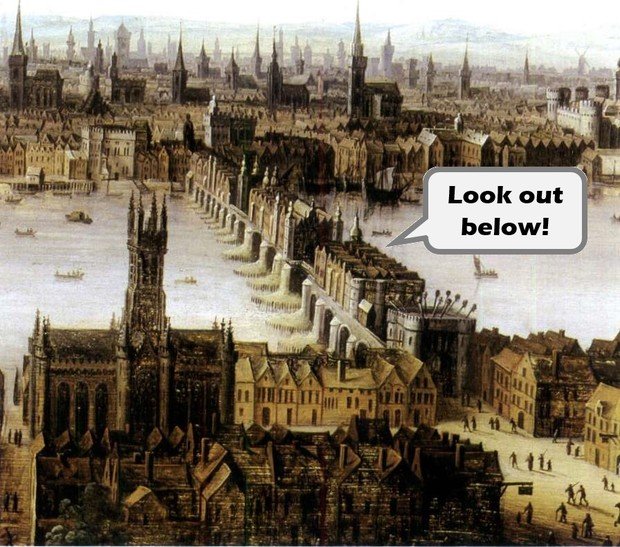 Cities in the medieval to early modern eras cared about how human waste was cleared out of the streets, but taking the time and money to build sewers rarely received popular support. In seventeenth century Berlin, a law was passed that forced visiting peasants to clear garbage away when they left. The people of London were content with ditches that oozed human detritus out into the Thames River. If your house was built on London Bridge, gravity was all that was required to transport your waste to the river.

In summary: the people of Vizima don’t know how lucky they are.

The Law of the Shiny Metal Men with Pointy Sticks

Once out of the Drowner-infested uber-sewers, the locals did little to improve my impression of the city. First, a group of thugs turned on me after I tried to help them fight a monster that had pounce them at their campfire. Second, a group of hired goons ambushed me as I was leaving a NPC’s house. So distrustful of the local populous was I, that I nearly took a swing at a city guard.

It was his only fault really. The spear-wielding soldier came rushing around the corner of a house, apparently trying to catch up with the two other guards he was patrolling with. I don’t know if Geralt can attack friendly NPCs (I haven’t tried) but it felt like a close call. 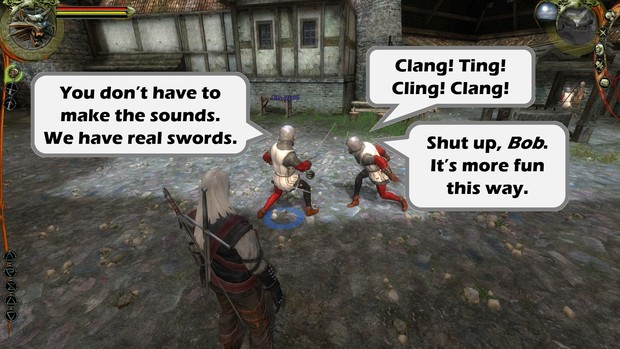 It’s not that a force like this, policing the mean streets of Vizima, is entirely alien to history. It is however more historically common to see the local populace take control of their security. Town and peasant folk alike would often band together to form law enforcing groups with varied levels of royal support. Brotherhoods (known as ‘Hermandades’) cropped up all over Spain whenever a region collectively decided to tackle local bandits, leading to the eventual creation of the Santa Hermandad, a national brotherhood in the 15th century.

It was therefore up to the people to form and enforce the law. Whilst a king or lord could afford to use the local forces in times of emergency (The Witcher story line alludes to several major concerns), it would be impossible to police a bustling, thriving, ever-expanding medieval city. There was certainly no practical way of policing all the small villages and towns across the kingdom. The sovereign could appoint a magistrate, justice of the peace or judge to provide rulings on accusations of criminal behaviour, but using the army to enforce law and order was an expensive practice.

Crime prevention was not prevented by a physical presence, but with the very real threat of brutality. 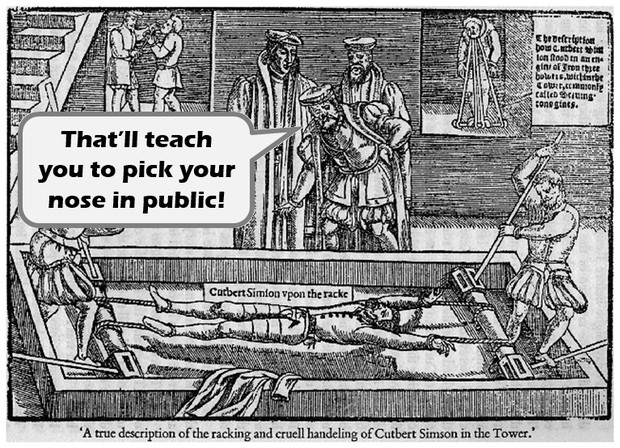 I’ve spoken before about the vulgar and visceral nature of crime and punishment throughout history. Until relatively recent human history, the promise of mutilation or evisceration was the main deterrent for those wishing to assault their neighbours. The nature of the brutal death or disfigurement often depended on the whim of the local judge, the nature of the crime and even the criminal’s gender; woman who committed murdered were often strangled to death in 13thcentury Europe.

If you were foolish enough to ignore the blood-splattered warning signs, but were of a social step above peasant, you might be put to a trial. Not a fair trial though; in the Middle Ages a trial was usually a chance for the wronged to get revenge. The accused could be sentenced to one of many colourful ‘ordeals’. One such practice was the Ordeal by Water, the infamous practice of hog-tying the accused and throwing them into the river to see if they drown or float. Most people might know this as a way to weed out witchcraft, but you could go through this ordeal if you were caught or accused of poaching too.

If someone sank, and were therefore guilty, but were dragged out alive, don’t worry: they’d be hanged drawn and quartered afterwards. Hooray.

In Part 2, I was kinder to the historical side of The Witcher. It is therefore essential to provide balance. So while the alchemist element is a reasonable representation of something historic, and the city itself bulges with historic inspiration, the picture is not without its faults. Vizima is a marvellous looking city, but from my perspective it seems culturally impossible and dangerously expensive. Whoever designed the cities underbelly was either mad, insanely rich or both. The people running the city now are also burning money to ensure an unusually high level of security.

I have more to say about the city and its surroundings, but that can wait until Part 4. By then, I will no doubt have explored further, spotting new historical (in)accuracies, and I won’t have space to include those aspects until I get to Part 5… and so… on…

Until then, what aspects of The Witcher do you feel have real historic grounding? Are there any parts based on misconceptions of history or mythology? Feel free to add to or correct any of my observations too.