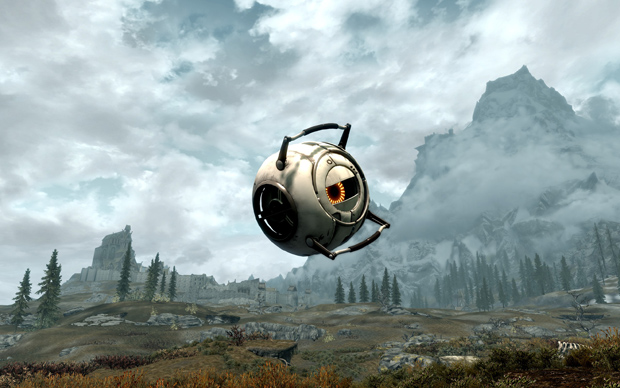 [Dtoid community blogger RedHeadPeak follows up his well received and delightfully educational blog about historical accuracy in Skyrim with an equally interesting part 2. What a long sentence. Want to see your own writing appear on the front page? Go write something! –Occams Electric Toothbrush]

You know, the more I play Skyrim, the more I begin to realize that historical accuracy isn’t the main point of the game…and I’d be very disappointed if I wasn’t too busy Fus-Ro-Dahing the local wildlife across the landscape.

A few weeks ago I began to play Elder Scrolls V, and almost immediately began to spot the many ways that History has influenced the game. The Vikings are the main inspiration, whilst other ideas are taken from various points in the middle ages. Three weeks ago I shared these observations. Some parts of the game show accurate references to historic details, whilst other features were based on misunderstandings of the past. The majority of readers seemed to enjoy the makeshift history lesson, so here we are at Part 2.

Another collection of observations lie below. Whilst each Elder Scrolls game becomes more fanciful and magical as the story develops, there are still aspects of the game that make absolute historical sense and other aspects that don’t quite fit.

The Dragon in History

Skyrim begins with your execution. Luckily for you, the execution is interrupted. This is very fortunate; decapitation would really spoil all that time spent getting your hair just right in the character creator. Your execution is postponed by the arrival of a big ol’ dragon. And yes, there’s historical accuracy here.

Fire breathing dragons did not exist in the Middle Ages (I know, I’m upset too) but the belief in dragons has been very much alive for a very long time. In fact, the concept of dragons has existed in Europe for eighteen thousand years (and twice that in Asia). For example, take a look at this extract from the Anglo-Saxon Chronicles:

“This year came dreadful fore-warnings over the land of the Northumbrians, terrifying the people most woefully: these were immense sheets of light rushing through the air, and whirlwinds, and fiery, dragons flying across the firmament.”

This extract is old school propaganda. The monk that produced this piece was intending to emphasize all the evils that signal the arrival of Viking raiders. Their message is brutally clear: where there are Norsemen, there are dragons.

The European folklore on dragons isn’t too different from what you see perched on the castle towers and rooftops around Skyrim: armored hide; wings; fire-breathing were all accepted ‘truths’. Unfortunately, there are two major inaccuracies. Firstly, a ‘historically accurate’ dragon has four legs and wings on its back. What you see in Skyrim are in fact known as Wyverns. Secondly, most medieval literature and artwork suggests that dragons are operate on a slightly smaller scale…

This is Saint George, the Patron Saint of (way more than just) England dealing with a dragon. In almost every depiction of this scene, he’s fighting a beast the same size, or smaller than, the horse he’s riding. Sorry Skyrim dragons, it’s doesn’t matter how hard your roar; you’re not a real dragon and you know it.

There are several varieties of horned and spiky armor in the lands of Elder Scrolls. The horned helmet is especially prevalent in this installment. Whilst these items carry a distinct level of visual bad-assery, in reality the horned helmet is a ridiculous as it is entirely illogical.

The horned helmet is no more than Wagner’s attempt to make his opera, Der Ring des Nibelungen, slightly more visually striking. The stereotype became ingrained in the public’s imagination. Not only has their never been a Viking helmet found with horns attached, there is only one complete Viking helmet in existence. It looks a great deal more straightforward than the stereotype, but no less impressive:

And then there’s the lack of logic. If a warrior walked onto a medieval battlefield with horns on their head, they are either going to find themselves dragged to the ground by the make-shift handles, or their opponent is going to grab the horns, lift the helmet off their head and beat them to death with it. Needless to say, my character won’t be wearing one. I won’t allow it.

Having said that, it’s not like there aren’t examples of headwear and armor from History that substitute practicality for fabulousness. The Roman centurion sported a giant Mohican-like brush atop their helmets so that they could be easily identified. Whilst the majority of helmets in Skyrim follow the Viking and Saxon practice of leaving most of the face uncovered, we’ve all seen how knights from the 15th century would encase their heads almost completely in metal. Not to mention the spiked ‘Pickelhaube’ helmet that the German army was still sporting in 1914.

How many glasses of water has your character drunk in Skyrim? That’s right, none. How about alcohol? I’ll bet you’ve seen plenty of wine and mead lying around, and that isn’t too far from reality. We enjoy running water courtesy of an advanced network of plumbing, and water sealed in bottles. In medieval times, water was a difficult thing to keep fresh. Anglo-Saxon villagers would drink substantially more weak beer than water, because the former is easier to store. Wine is a drink usually consumed by the higher class of medieval society; it’s something that Europe has been producing since the Roman era.

Wherever you enter the main hall of the castle keep, you can expect to find a vast table covered in fine foods. This is another (mostly) accurate reference to the life of nobility in the middle ages. A king and his council could consume up to 6,000 calories in a day. Three times more than what is needed. The fattening effects of this luxurious lifestyle where counteracted by the very physical hobbies men would have during this time. Wrestling, jousting, hunting, dancing and other sports kept the nobility lean. When they were feeling particularly bored, they could declare war on a neighboring kingdom. A fight to the death can do wonders for your waistline.

There’s is at least one unfortunate inaccuracy with these scenes of plentiful food: way too many vegetables. Why would a king eat a turnip? Not only is it nowhere near as scrumptious as fresh porpoise or peacock, but vegetables are peasant food. Medieval kings had no concept of healthy eating. They also didn’t appreciate how a diet of meat, cheese and alcohol can lead to gout and diabetes…

So when you wander into a villager’s home and find nothing but veg and berries, you know that’s historically accurate. If you find deer meat amongst their possessions, that’s a bad sign. If a peasant was found hunting deer during William the Conqueror’s reign they’d have a hand cut off. If they were stupid enough to try hunting a second time, they’d be blinded. A tad unfair, to be sure.

Skyrim continues to take inspiration from History, and most of that fantasy elements are based or ideas and beliefs from the pages of History. It’s important to remember that almost every creature or monster you see in a fantasy game can be traced back to an idea or belief that is centuries old. Even though the horned helmet is an historical misconception, we can still use history to explain where that misunderstanding came from. Even the most basic ingredients in the game, like the foods lying on banquet tables, have grounding in reality. Skyrim might be a game that lets you throw lightning at dragons, but there’s no denying that it owes a lot to the awesome nature of History.