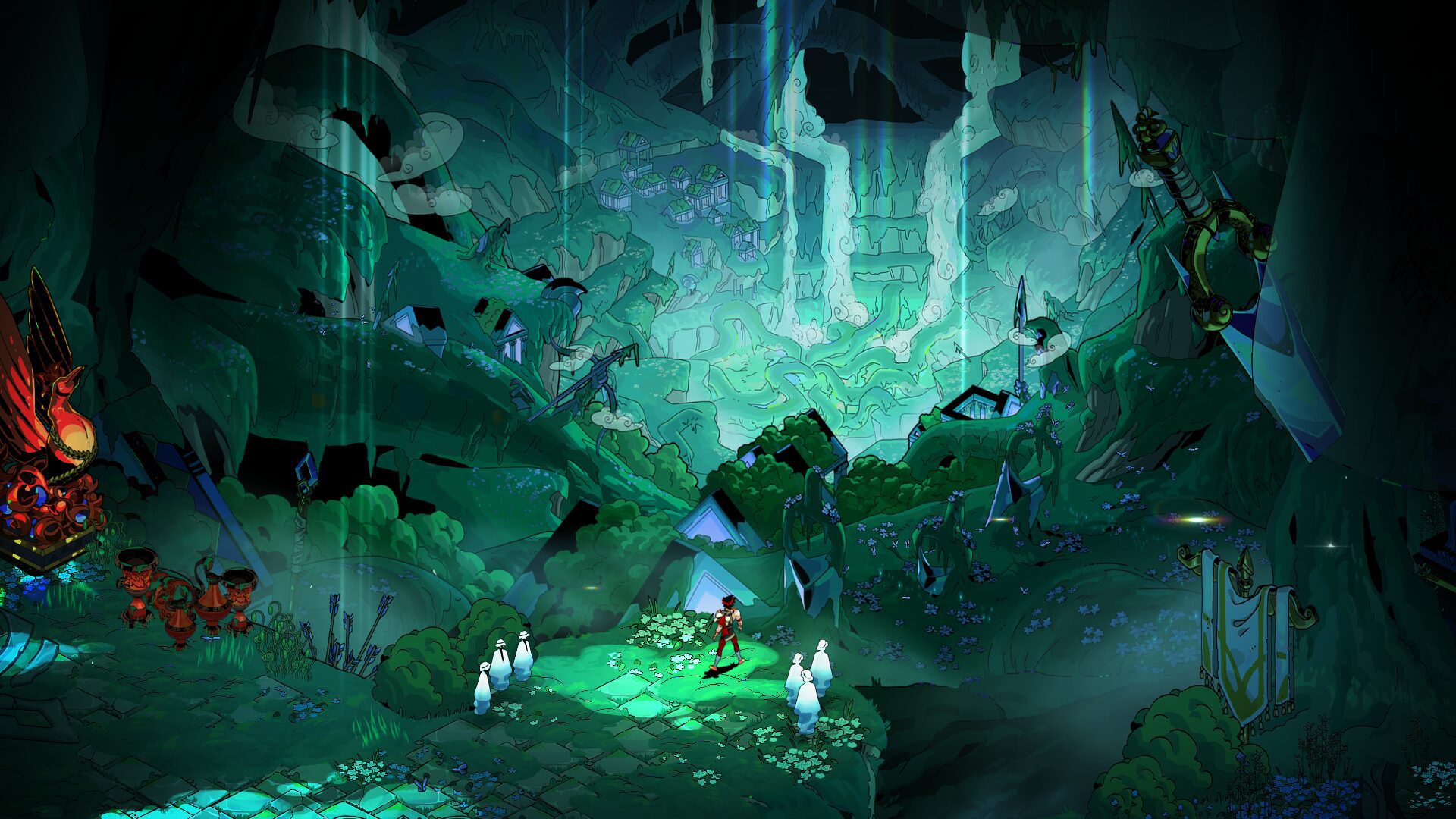 Between pandemic lockdowns and uncontrollable fires changing the color of the sky, it’s easy to slip into the thrall of learned helplessness. Twenty-twenty has been suffocating, but playing Hades gave me a breadth of insight.

We’ve all had a rough year isolated from the life we previously took for granted. Maybe you miss getting sloshed at a bar with your pals. Maybe you long for a lost loved one. This year altered the context in which we all live our lives, and now, in that new context of living, Hades provides fascinating parallels to a world forever changed.

Playing Hades provides an escape from the hell of today, but it wasn’t always like that. I’ve been playing since its Early Access release in late 2018; our world was different back then, as was Hades’s Underworld. But change comes with time, and themes of isolation began to surface in my playthroughs as 2020 started pulling its bullshit.

The dread of separation is weaved throughout Hades. Everyone’s going through their own personal hell. They might not all be getting their insides picked apart, but they may as well be as Zagreus ruthlessly murders shade after shade in his attempts to reach the surface beyond the Underworld. The codex (written by Achilles) fleshes out the mythology of each shade—they came from somewhere and were once more alive than Zag himself.

Each enemy you face is doomed to damnation of eternal slaughter by the Prince’s hand, just as each ally you meet along the way is resigned to a hell all their own.

Sisyphus makes the best of his situation. His optimism shines bright in the dark depths of Tartarus. He makes the best of things regardless of his eternal tribulations, and he genuinely gets excited when he’s lucky enough to see Zag. But he has Bouldy, a giant boulder with a face pounded into it, to keep him company when the Prince isn’t around. Even if inanimate, Sisyphus’s relationship with Bouldy is the only thing keeping him peaceful and sane and able to bear the weight of his own existence as he endures eternal damnation.

Isolation echoes through the halls of Hades’s house and bleeds through each level of the Underworld. When visiting Patroclus in Elysium, Zag’s presence goes unnoticed at first. Before he’s approached, Zag can overhear Patroclus practicing what he’ll say to Achilles if they were to ever reunite. Questions unasked. Feelings unresolved. Everyone has their own hell they’re going through in real life—alone—just as they do in Hades, but it wasn’t until I reunited Orpheus and Eurydice that it hit me. The context of their world had changed.

“Well, you’re a real sweetheart, hon,” said Eurydice. “You’ll still be seeing Orphy all the time around your House, but now, I get to see him, too. Nice having something to look forward to, you know? Bet someone out there feels that about you.”

Now, Orpheus’s absence in the house is a reminder that his presence graces someone somewhere else. Fellow hell-traversing folk have their own solitary doom looming over their heads, but Zag’s perpetual treks through the Underworld helps them find peace and purpose as he ascends, re-emerges from the Pool of Styx, and ascends again.

As Zag tugs at the threads of others’ fated torment, he tends to his own struggles. His attempts to break out of his father’s realm only serve to bring them closer together over time. Now, more than ever, Hades is giving his son attention, however violent and disdainful it may be. These moments coalesce into fleeting shows of kinship whenever Zag reaches the surface. While father-son bonding time isn’t Zag’s initial intention, his fate bound by Nyx’s daughters is inescapable. There is nothing Zag can do to rewrite fate. He is the Prince of the Underworld, and there he must reside.

“Don’t you see, boy?” Hades reminds his son, still wet with blood from emerging out of the Pool of Styx. “You’re trapped.”

The Olympian gods have little influence in Hades’s realm, but anyone who’s played Hades knows exactly how much of a difference one boon can make in a build. One single gift from the gods might seem arbitrary at first, but over time it can synergize with another god’s contribution to create unrehearsed tactics in battle. Change doesn’t come all at once, despite it appearing that way. You rarely know what build you’re going for while playing, but boon by boon you end up, eventually, with a winning combination.

Conversations with the Olympians feel inherently different than with those bound to Hades’s realm. Talking to Zeus feels like a prayer; talking to Asterius feels like a bond. Dionysus talks to Zag like he’s there, but there’s no real back-and-forth banter. It’s one-way communication—telegraphed vocalizations of the gods’ intentions and emotional sways as they bicker about who gets to aid the little godling Zagreus. The lack of physical presence cripples Zag’s budding relationships with his lost family from on high, but their ability to shift the context of any one escape attempt becomes concrete when you’re looking at the “Victory!” screen at the end of a run.

While playing Hades, I don’t really feel alone until I’m not, which makes moments like encountering Thanatos outside of the house so palpable. I’m traversing hell alone with nothing but a weapon and a keepsake, and just those two components can make each escape attempt feel unique in both mechanics and narrative without divine intervention. Context for Zagreus that I, the player, can control.

One of my most memorable runs was with the Pierced Butterfly, a keepsake from Thanatos that permanently buffs the damage Zag does so long as he doesn’t get hit. Running into Than usually precedes a competition to see who can kill the most shades, but this time was different. Than noticed my choice of keepsake—his keepsake, and knowing what its effect was told me to stay back so I wouldn’t take damage. As the competition began, I fled, allowing Than “the win.” The relationship between Zag and Than doesn’t just evolve and reveal itself over time, it sculpts reprieve from the depths of hell. The context may change, but the excitement to see Than never does.

Zagreus is an inspirational addition to the gods’ roster by having the unique power to change others’ perspectives—a far cry from the belligerent theatrics of his Olympian family. The simplest interactions with your fellow hellbound relatives can lead to subtle yet monumental paradigm shifts.

Sometimes we isolate ourselves. Sometimes the world does it for us. We might not be a demigod, but we have something Zagreus does not. Time. A metric that does not exist through the lens of eternity. Our mortal minds can play quite the trick on us after twelve months of 2020. This dark cloud of a year is about to pass, but things will improve over time so long as we endure our own ascension. Being able to see Hades’ characters change their perspectives over time and alter the context of their world helped me realize that our current landscape isn’t a permanent one, no matter how eternal it may seem.

Slow as entropy may be, change is coming, and if we can alter just the tiniest bit of it in a single day (read: run), who knows how big of an impact that could have on ourselves and those around us. I can’t say myself. Neither can Zag, but that doesn’t stop him from fighting through the darkness.