This August is a real treat for metroidvania fans. We already have a handful of great new releases like Dead Cells, Hollow Knight‘s next expansion is on the horizon, and Guacamelee 2 is just around the corner. It’s always a thrill to explore new exotic lands and constantly hone a unique set of skills against an array of baddies, and a solid metroidvania scratches both itches. Fewer still scratch as well as Guacamelee, and even within the flood of them, Guacamelee remains one of the most distinctive in the genre.

A class of games with origins as ancient as the NES and such popularity among modern indie developers can be a tight crowd. It’s one of those genres so overstuffed with quality releases that anyone with reasonably limited money and free time can only keep up with a fraction of them. Yet despite its dated memes, Juan the luchador’s quest to suplex an army of skeletons remains one of the most fondly remembered journeys among that crowd. And not just because it’s about a luchador suplexing an army of skeletons, though that’s probably a part of it. 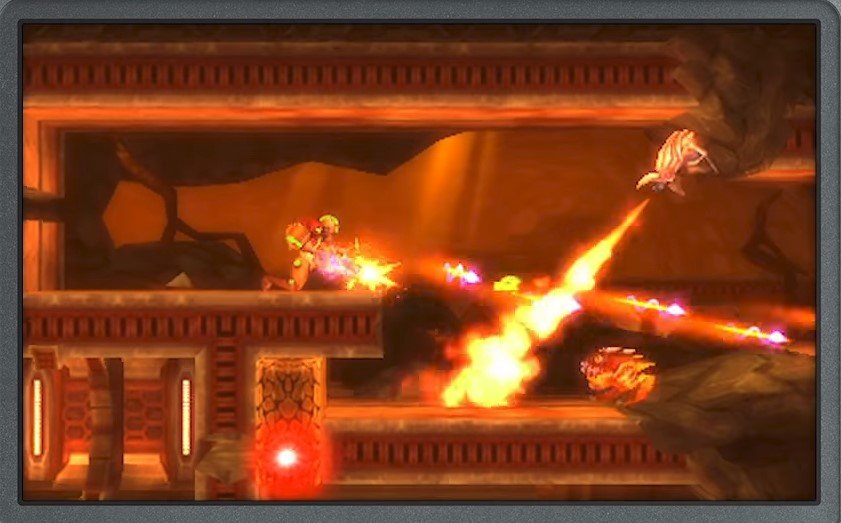 To start off, we might as well define “that crowd” with an abridged look at the history of metroidvanias. This genre is a type of game where you explore a single massive level (usually but not always in a sidescrolling platformer), emphasizing exploration through acquiring new abilities that open new routes and secrets. Some also claim it is defined by an eerie and lonely atmosphere, not unlike a horror game. That is a big part of what made the original Metroid games so iconic, and that tone compliments the tension of exploring unknown landscapes. While categorizing the entire genre as such is extremely limiting, tonally similar games like Axiom Verge, Xeodrifter, and Hollow Knight attract a share of praise by that virtue. So to some extent, this is considered a norm.

Naturally, that is no true rule. We’ve since seen countless games explore softer and lighter tones with zero horror elements, from the cartoonish Shantae series to the beautiful Ori and the Blind Forest and the colorful Iconoclasts (… okay, that one isn’t so light or soft, but it has that bad guy who only speaks by shouting a single word a line and he’s hilarious). Still, more have further stretched the genre’s gameplay conventions, such as Kirby and the Amazing Mirror’s sprawling map without persistent character upgrades or Yoku’s Island Express’s pinball mechanics. While there is a certain image of what a faithful metroidvania is among hardcore aficionados, this is a loose definition that dozens of examples have already rebelled against. In order to stand out from this large crowd, it takes something special. 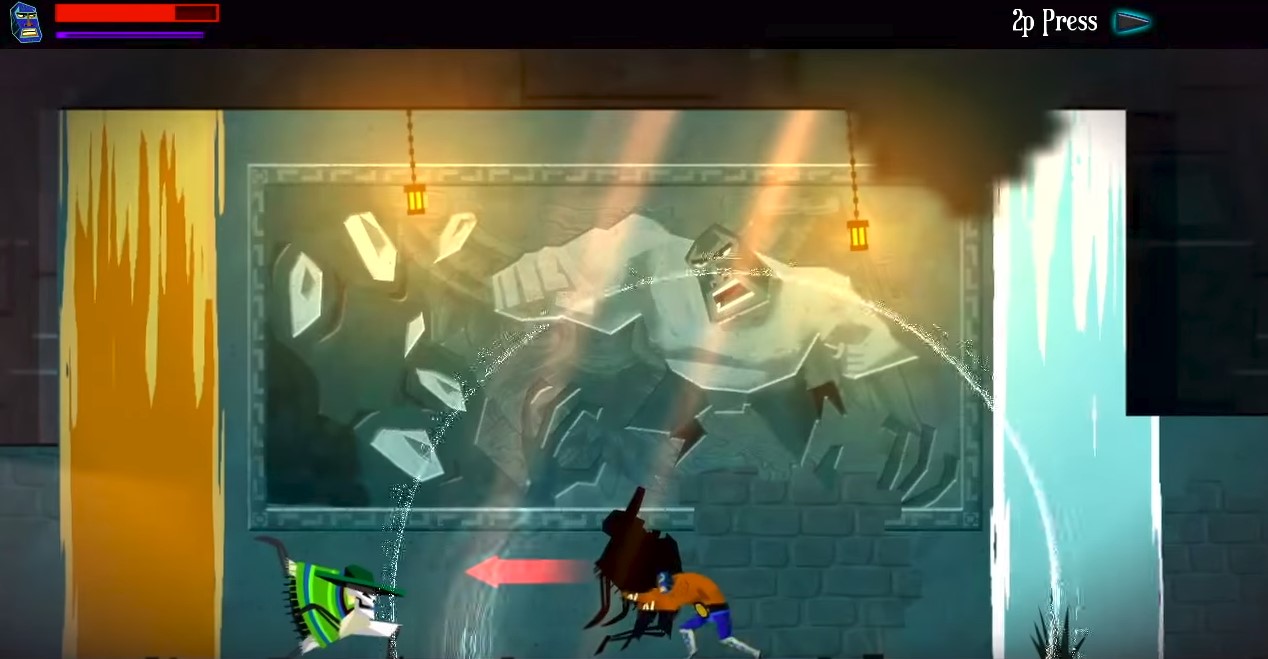 Guacamelee doesn’t only rebel against that ominous image, it revels in the inverse. Combat is fast and frantic, rewarding stylishness and extraneous combos with currency for power-ups. Secrets lie aplenty, but a transparently designed map makes it easy to uncover them, thus making exploration faster and more about execution than patience. A second player (or third/fourth) can join the festivities, embracing the camaraderie and ludicrous banter that any good couch co-op session brings. These mechanics are built around enjoying the action of the moment more than pondering mysteries, giving emphasis to the thrill of the adventure and directing gameplay flow towards that end.

Its art is strikingly colorful and angular, with playful references and jokes almost everywhere you go. It’s not without memorable moments of seriousness, but far more of the game is packed with jovial humor and “for the fun of it” scenes. Guacamelee is a fiesta, a celebration with the straightforward goal of being as fun as possible.

Pardon me for spoiling a midgame gag, but one of Juan’s upgrades is an attack called the Dashing Derpderp. No other metroidvania gives the player a core ability named for its creator’s lapse in creativity. Many lovable games embrace moments of comic relief, but by crossing this line of sensible nomenclature, Guacamelee cements its brazen commitment to its comedic identity. It’s one of few games, especially in this genre, willing to broadcast itself so prominently as being driven by humor.

This energy is about as far away from the tone of the “hardcore” metroidvania as it can get, and it’s lovely for that. There’re plenty of other colorful and fun ones out there, but Guacamelee amps that energy up to the max, broadcasting it in almost every corner of its design. Yet all of that is merely aesthetic, and many similar things can be said about Shantae anyway. Style can carry a game through its initial launch and uphold its identity in the aftermath, but only if the gameplay supports it.

Guacamelee follows all of the conventions of metroidvania design. It handles them all greatly, but it’s mechanically a very vanilla example of the genre. You jump around on stuff. You fight stuff. You collect a lot of stuff. Most of that stuff makes you better at doing stuff. You explore old areas as you gain new stuff to do. The feedback loop persists. The most it does to diverge from traditional genre mechanics is introduce a brawler-like combat system, which is still less radical than Yoku literally pinballing his way around the world.

But I find collecting upgrades in Guacamelee more exciting than in the likes of Metroid. In doing so, I was more invested in the thrill of exploring every nook and cranny of its world, and by proxy in the thrill of what defines these games.

While many of Samus’s weapons have useful exploration functions, outside of combat they often feel more like keys than intrinsically interesting tools in themselves, and vice versa. Missiles simply unlock doors on contact, much like a literal key. The Speed Booster is a fun ability to barge into enemies with, but good luck executing it in most boss fights. Bomb-jumping is a thrill to discover and exploit, but bombs have limited use in most encounters. The Wave Beam is a fun weapon to exploit against enemies, but it doesn’t take any skill or strategy to unlock Wave Beam exclusive doors. 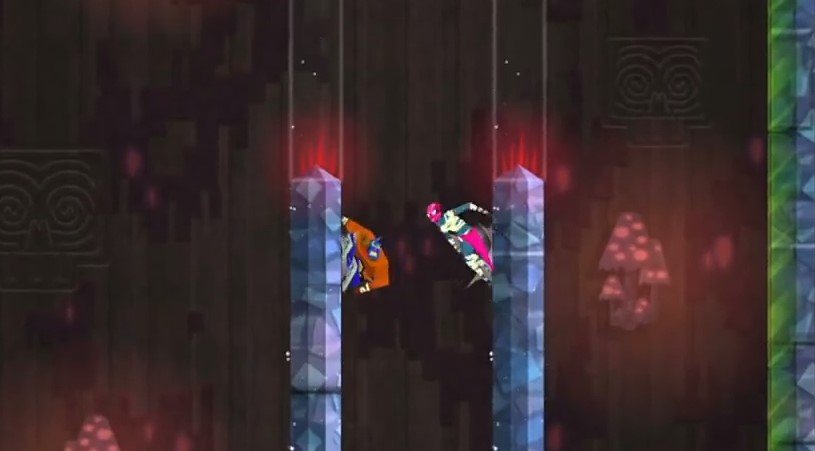 There’s a hard divide between abilities that are fun to explore with and abilities that are fun to fight within the Metroid games I’ve played, and that holds true for most every other metroidvania. That’s not actually a bad thing. A good game needs only whatever you focus on to be fun, and segregating an ability’s purpose by proxy eliminates any need for it to be thrilling outside of that purpose. But it’s an observation that came naturally to me after Guacamelee headbutted that barrier.

While it sure feels as if most abilities were designed primarily for one or the other side of gameplay, the vast majority of them are given interesting challenges and applications in both. Every special attack has some effect on your movement, which level design exploits by challenging you to carefully execute attack combos over hazards. They are also excellent tools for extending combos and managing crowd control, making each of them fun toys to practice in fights against the weakest enemies. Similar can be said about the rest of Juan’s platforming abilities as evasive techniques in the heat of battle, including the double jump, wall jump, and chicken. Even the most situational moves in his arsenal are given ample showtime in both the ring and jumping puzzles.

The result is a game that marries both sides of its genre into a single, cohesive experience. Juan’s entire moveset remains relevant throughout the whole game because every move remains relevant and nuanced to use wherever he is. This makes it easier to appreciate every part of his arsenal and how it grows throughout his journey. That’s one of the best feelings any progression driven game can get across. Most games that codified the genre get very close, but don’t quite accomplish that. It’s an opportunity that Guacamelee seizes to strike closer to the heart of the genre’s appeal, making every upgrade more rewarding. It sticks out more prominently among other experiences because it excels so strongly at the design elements that define the genre. 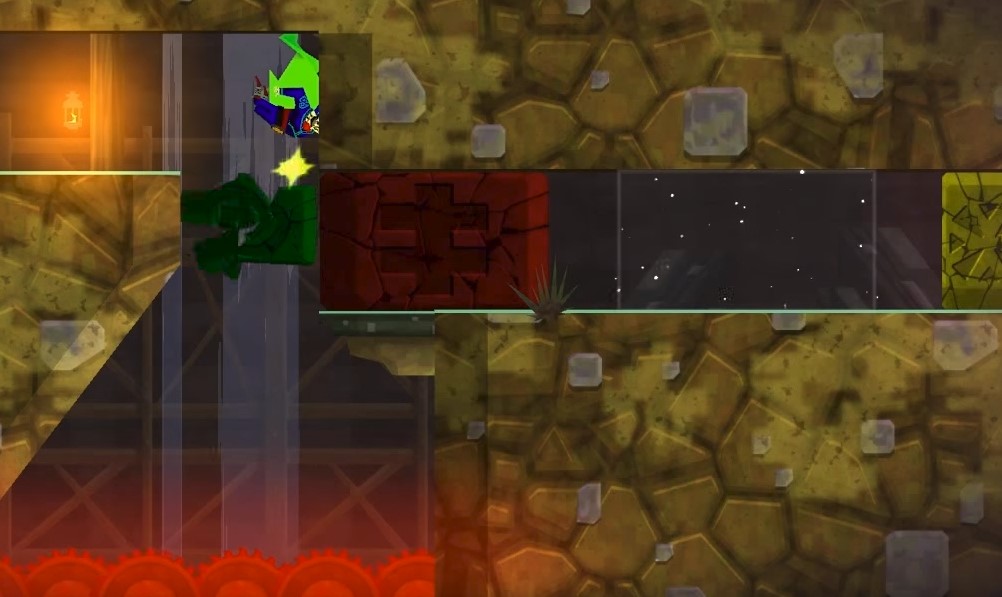 These days I consider Guacamelee my second favorite metroidvania. The more recently released Hollow Knight is my new favorite, though to be transparent about my preferences, I am eternally loyal to the insect empire. Hollow Knight’s a wonderful game on its own merits, I wouldn’t gush about it so much otherwise, but it’s a drastically different kind of game than Guacamelee and I’m hesitant to say that either is objectively better than the other. Genres are rules and guidelines to follow, but they are always an art, never a science, and that’s what allows anything in a crowded genre to separate itself from its peers. Guacamelee’s style is only a part of that flavor, but combined with its finely tuned gameplay and everything else, it’s an exotic taste that no game like it has replicated.

I don’t think any game will ever replicate that taste, either. Well, that’s what I think right now but Guacamelee 2 comes out August 21st. If it’s even zestier than the first one, I may have to take back what I just said about Hollow Knight being my favorite. Maybe. Don’t tell Mothra.